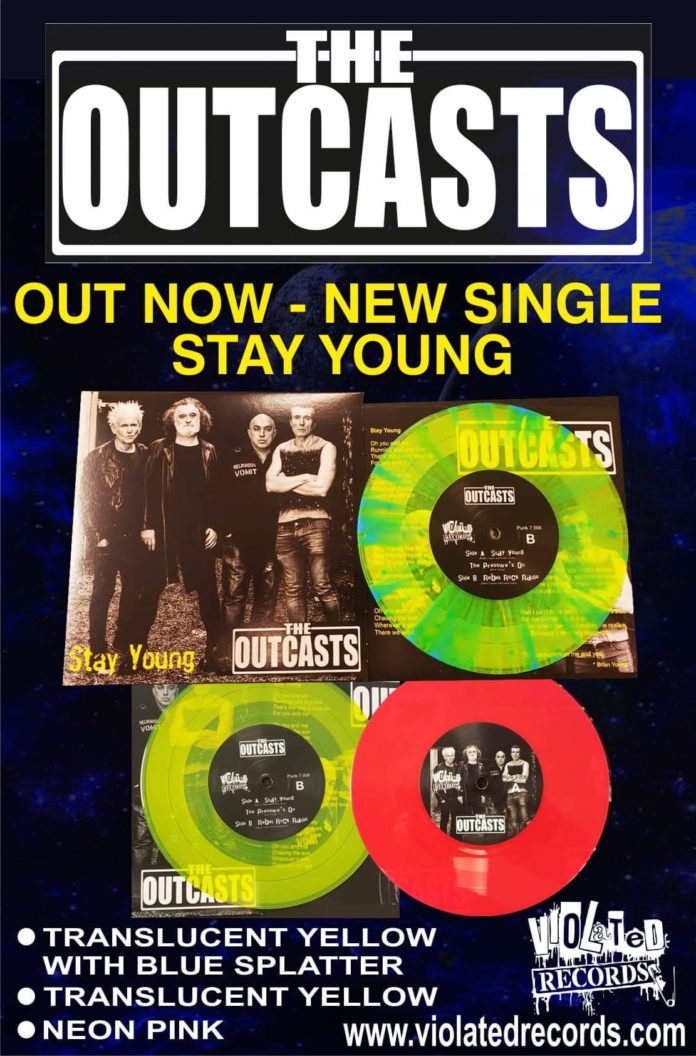 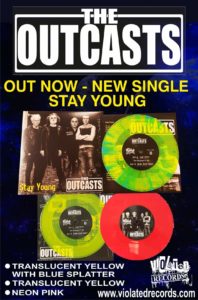 Another of the Last Punks Standing, the Outcasts release a new single on a choice of coloured vinyl – and they sound as good as ever. Ged Babey takes a brief look back as we premiere the video for ‘Stay Young’.  Yeah, kinda ironic, but ‘stay young’ up-here (taps head).

The Undertones had the warbling pop hits, Stiff Little Fingers had the punk credibility, commenting on ‘the troubles’, but my personal favourite of all the Northern Ireland punk bands were always the Outcasts.

They had the best name, sang about teenage rebellion, frustration and inadequacy but looked as hard as nails.  They had an unpretentious ordinariness about them that you could relate to but made great glam-inspired punk pop.  Later they made big brash windswept rock before turning to psychobilly surf-punk in a bid to keep it fresh and exciting.

I reviewed the bands singles compilation on Anagram Records back in 2007 and the heading was ‘Northern Irelands Most Punk & True’  but was a bit stingey with the star-rating.  It’s still online here and was the first time my name appeared in a Wikipedia entry – yet another reason why I will always love the Outcasts!

So here’s a Brief History of The Outcasts in five videos including the brand new 2020 single.

It’s really embarrassing at school / when the teachers asking me what I’m doing / and i’m day-dreaming about you.   An absolute twenty-four carrot teenage punk classic

Later re-enacted for the movie Good Vibrations  – this is the original footage – just look at that dancefloor!

Studs, leather-caps and topless skins – the Winter promo is a classic of over-egging the punk machismo and ending up a bit gay-bar.

Stooges cover and the psychobilly surf-punk phase with an eye on the teen-market with Billy Idol goes to the Batcave image.  Sisters of Mercy covered 1969 too around the same time whilst the Alarm made a success of the hair-style but with far weaker music.

Forty two years on and the teenage rebels are older but no wiser and brave the cold to make a video for a great piece of poppy punk rock’n’roll with a flavour of The Boys.  Greg Cowan has something of a punk-rock Keef Richards vibe about him but they look like they’re having fun.  Look out for Terry Hooleys guest appearance at the end!

Never the coolest or technically ‘the best’ punk band ever perhaps, but that was never the point.  They did it their way, they had fun, they gave it everything they had, they had godawful bad-luck (founding member Colin Cowan died in a car-crash) but they made some great records and are always shit-hot live.  And they are fuckin’ loved by punk rock outcasts and fans (me included) from all over the world for their part in defining punk rock from their part of the world.