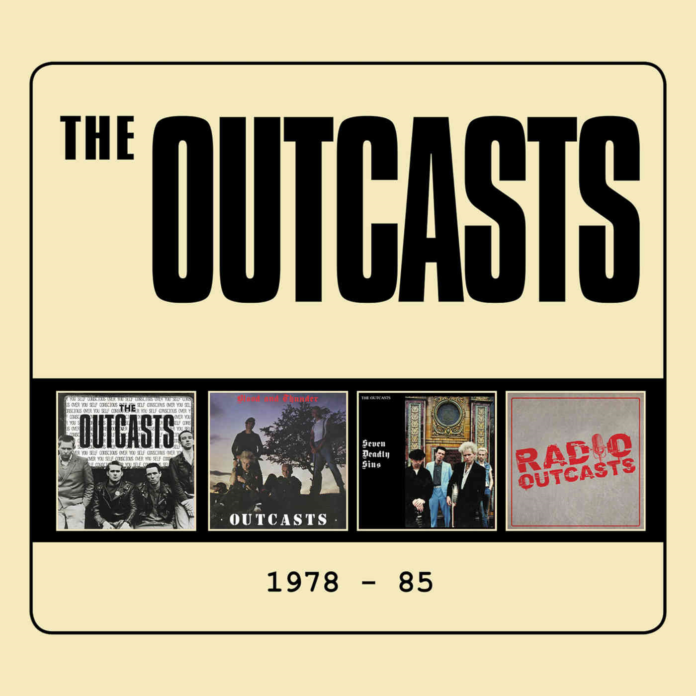 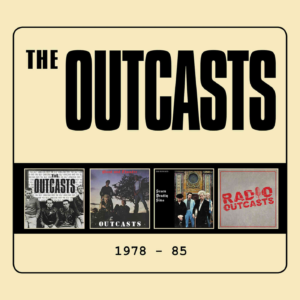 Boxset bringing together the three albums recorded by “Good Vibrations” punk band the Outcasts, with many bonus tracks by the NI legends….Ian Canty hears songs of school, winter and deadly sins….

Of all the bands that came through the Good Vibrations ranks, Belfast’s own Outcasts stayed the longest, putting out two singles (plus the Battle Of The Bands comp EP which they contributed to) and an album on the imprint over the course of a couple of years. With a wild reputation that went before them, they had formed early on in 1977, enthused by the punk scene that was emerging in London at the time. They played their first gig in late spring of the same year, mixing their own efforts alongside covers of the Damned and the Sex Pistols. The band’s initial line up feature three Cowan brothers. Martin on bass was joined by siblings Colin on drums and Greg on guitar, with Colin Getgood (nicknamed Getty) and vocalist Blair Hamilton leading the line. The latter quickly left, leaving the “classic” Outcasts in place.

They swiftly built up strong local support and in 1978 the IT label issued their first recordings, the Frustration/Don’t Wanna Be No Adult single. On hearing this steamrolling instant classic punk 7″, Good Vibrations naturally wanted the Outcasts on their roster. So they duly signed with Terri Hooley and in the same year another real goodie in Just Another Teenage Rebel emerged. By 1979 they had amassed enough songs to record their debut album Self Conscious Over You without recourse to much older material or cover versions.

This first LP found the band immersed in punk’s non-PC discourse of sexual revulsion, (for example Clinical Love) and anti-love posturing (Love You For Never). But apart from a few moments, most memorably during the theatrical coarse violence of The Cops Are Comin’ which may have been influenced by the Heavy Metal Kids song of the same name, this is more naïve teenage gossip as song lyrics than anything else. Even so it does reflect youth of the 70s in all its ugly glory and the tunes and relative innocence do grant their efforts a winning charm. The title track, also released as a single, is a prime slice of youthful angst with a great chorus and kicks off the album with gusto.

Cyborg has a nice garage punk feel and represents a change of pace and the addition of Simon Lloyd’s sax gives another dimension to the brooding meditation of School Teacher and shows up well on the nursery rhyme punk of Love Is For Sops. Self Conscious Over You is a fresh blast of 1979 pure teen frustration, full of envy, jealousy, hate, dread and even a brush with true love (One Day does hint at a happy ending for once). This disc is rounded off by the addition of the two classic 1978 singles and their contribution to Battle Of The Bands, a different version of The Cops Are Comin’.

After the album the Outcasts drafted in second drummer Raymond Falls and left Good Vibrations. They formed their own label GBH (a quip referencing the trouble that followed the band around) in 1981 for the Magnum Force single. For their next two releases they changed the name of the label to Outcasts Only. Tragedy struck the band when Colin Cowan was killed in a car crash in 1982. The band were understandably distraught, but were convinced to go on. They moved over to the Abstract label, an off-shoot of Cherry Red, towards the end of the year.

Blood And Thunder, the first Outcasts album I purchased on release, arrived four years on from their debut and was completely different in both tone and sound. I’ve always found this record mysterious and brooding, the teen dreams of the first LP being usurped by songs that confronted the tough realities of life and the tortured psyche. There’s only really one backward look, the re-cut of first single Frustration. Not sure how that and the cover of the Glitter Band’s Angel Face (also released as a single) really fit into the LP as a whole when they arrive at just past the midway stage, but as they both sound pretty good I’ll give them a pass.

The heart of Blood And Thunder is really the jamming guitar blasts of Winter, the two part chant-a-long epic Beating & Screaming and a mean and moody Gangland Warfare. By the time we reach the pure rock & roll raunch of Mania, we’ve gone through quite a trip. Wrapped in a stylish sleeve the Outcasts had updated their approach pretty damn smartly. As extras on this disc we get the first rough version of Gangland Warfare, the atmospheric Nowhere Left To Run which pointed towards the direction the band would take on Seven Deadly Sins, plus two dubby instrumental takes of the same song. This disc ends on a bum note with a bit of a duff punk version of Kenny Rogers’ Ruby (Don’t Take Your Love To Town).

By the time of 1984’s mini-album Seven Deadly Sins for Paris’ New Rose label, the Outcasts had changed yet again. Here they aim their sound squarely at swamp-tinged rock & roll, so much so on a Blood On The Cats psychobilly compilation they were billed as the Outcats. The title track was a natural rebel rock single and a version of David Bowie’s Five Years showed how far they had come from their buzzsaw punk roots. Only Waiting For The Rain harked back to their earlier Blood & Thunder days. After this record the band’s final release before splitting in 1986 was the 1969 12″ single, where the Stooges cover was joined by a rockin’ Psychotic Shakedown and the downbeat atmosphere evoked by Blue Murder. An edited version of 1969 is also included here.

This collection ends with a pair of Peel sessions from 1981 and 1982, recorded in the run-up to the Blood & Thunder album. As one might suspect the songs featured all turn up on the aforementioned album, with Princes Of Oblivion being titled The End Of The Rising Sun when recorded in May 1981. Like many punk bands taped for the Peel show, these versions sound simpler, but full of urgent energy that the Blood & Thunder album for its many qualities didn’t quite catch. The four songs from September 1982 climax fittingly with a feisty take of their first single Frustration, neatly bring the set right back round to the start.

The Outcasts showed an admirable sense of progression over the years of their original incarnation, moving from the “tales after school” punk thrash of the debut to the dark and moody attack of Blood & Thunder and finally to the more rock & roll Seven Deadly Sins. Through all those times they always came up with something interesting that no-one else was really doing. A reformed version of the band with Ray, Martin and Greg joined by Petesy Burns on guitar still gig and released the Stay Young single last year. They still cut the mustard live and have some gigs lined up in the UK for May this year, which if I were you I would check out. Listen to this thorough and entertaining boxset and then get along to see them gig, where the Outcasts prove time and again that they are still the real deal.