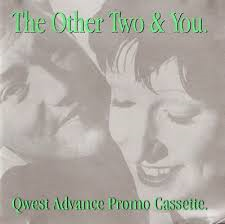 Reissues of the two albums cut by the New Order duo Gillian Gilbert and Stephen Morris under The Other Two handle, originally released in 1992 and 1999 respectively. The CD version of The Other Two And You has six bonus tracks and Super Highways has three extra offerings…….Ian Canty enters the world of the most unassuming pair in pop…

Even the name Steve and Gillian chose for their work outside of the New Order bubble was a telling indication of the pair’s innate modesty. Bernie Sumner and Peter Hook had already recorded their own dabbling away from the NO name, so now was the time for The Other Two to get in on the act. The details of their career are as scant and mysterious as double act’s public image. They debuted as The Other Two with a reasonably successful single entitled Tasty Fish back in 1991. The Other Two And You debut album emerging in late 1992 and another near-hit Selfish, which was included on the collection, brushed the charts. They then issued a belated follow up LP over six years later in 1999 called Super Highways, but this missed the charts completely, as did the record’s singles.

Going back to the start though, The Other Two And You didn’t stray massively far from their parent band’s sound, but that didn’t hinder my enjoyment of the record. Full of nice dance electronic grooves that border on house and trance at times, but with plenty of pure pop tunes as well. Some of the technology used feels a little dated listening now, but happily this is not a really big issue. Gillian’s voice is the real revelation here – cool, elegant and endearingly vulnerable.

Tasty Fish is an excellent dance/electropop single that is closer to Stock, Aitken and Waterman than most Factory diehards would care to admit (housing a few of the aforementioned 1990’s quirks). Whatever, it’s a sparky and winning way open to the record, something which continues on another belting tune The Greatest Thing. Selfish, the other single, has a tiny sliver of Everlasting Love in its catchy vocal line and there’s a gentle wonder to Gillian’s voice on Movin’ On which really catches the heart.

Where The Other Two And You struggles a little is on the offerings that lack Gillian’s enchanting vocal presence, like on the “Bomb The Bass-lite” (now there’s a phrase I never thought I would use!) closing track Loved It (The New Factory). To be fair the brief Night Voice is a convincing stab at moody electronica though. Overall it is a decent selection with much to admire, with Gill and Steve’s low-key approach largely paying off. Possibly it emerged into a market that was overstocked with this kind of thing at the time (St Eitenne, Everything But The Girl’s Missing etc), but this record has worn reasonably well as a good LP in its own right.

The bonus tracks on this disc are made up of dance mixes of material from the album. To be honest I prefer the original versions, with the exception of a great rejigging of Movin’ On, where Moby kits it out with a beautifully understated sound. Well done to him. NB if you are after the dance/trance of Autosound, it is only available on the vinyl version.

The success of this album and the accompanying singles were hampered by Factory Records entering a terminal financial decline around this time, with the London imprint issuing the records after the collapse. Tasty Fish and Selfish both charted just outside the UK Top Forty, but The Other Two’s released was delayed until the end of 1992, when all momentum previously generated had been lost. As a consequence the LP didn’t chart and the project was put to bed for nearly seven years.

More downtime in the New Order camp meant that there was a window to complete Super Highways, the second Other Two LP, in 1999. Onboard for this platter was Melanie Williams of Sub Sub, who sang lead on two of the four tracks she co-wrote. Her soulful voice dominates feelgood single and first track You Can Fly, where it is suitably allied to fast electro beat. Musically nothing much had really changed for the Other Two in the intervening years, but while I enjoyed the song for its strengths and accessibility, it does lose a bit of what made the best cuts on the debut i.e. Gillian’s voice and perspective. Still it’s beaty, brash and got the old toes tapping.

However The River, third track in, is just beautiful. A lovely vocal, sympathetic playing and a touching song about loneliness, this is one of their best. It’s a shame the dance trickery of the intro to next offering One Last Kiss sounds so faddy. That apart it’s a very good and speedy dance number, but perhaps there is a little too much happening. I would like to hear this without the rhythm track, as the synth symphonics and dual voices definitely point to something stunning afoot in there.

Unwanted is one of a few here that nudge towards a more traditional indiepop sound in a very appealing fashion. There’s a lot of guitar on this one framing a gentle but touching lyric of regret, rain, bus stops and hope – a real winner. Hello even has a guitar solo in its synth strings and indie pop arrangement, another fine effort. In my view Super Highways is just the better of the two albums, recovering after an indifferent start to build something of real substance that you could cut a rug to into the bargain. Side two of the original record is particularly strong, the sound of The Other Two truly carving out an identity of their own. This disc ends with three remixes, which tend to show their age a bit, but are ok for what they are.

None of the singles or Super Highways itself charted. All has been pretty quiet on The Other Two front in the 21st century, with only a remix of a Tim Burgess ditty credited to them in the last 20 years. It is a pity because there are certainly many worthwhile elements on display on both these records, if they are not quite classic albums themselves. Let us hope they try again, because on their day The Other Two managed to transcended or even better their New Order work in a way perhaps the “other two” in their solo adventures didn’t.