Home Blogs The other side of the World Cup : Ruth Daniel reports from... 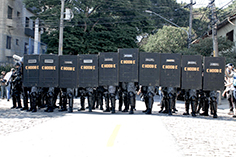 The day I became a Ninja in Brazil: Ruth Daniel reports from the street protests in Sao Paulo for the first match of the World Cup.

More info on the protests from…

Today was the culmination of many days of expectation and anticipation in Brazil for the inevitable protests and action around the World Cup. I’ve been in Rio for the past five days and travelled to Sao Paulo to be with the collectives that organise cultural, social and political activity across Brazil, who I have worked with for over three years to make positive grassroots change across the world. I wanted to witness the revolutions I’d seen from afar and action I’d seen from social media platforms in the UK for the past year.

Inequalities have been on the protesters’ agenda on the streets here – land rights for indigenous people, rights for the homeless to live in their own homes, rights for workers to fair pay and protests against FIFA and football generally here in Brazil. In a country where you have such huge inequalities, FIFA and the presence of the World Cup has only highlighted those issues.

I spent the past five days in NINJA HQ in Rio, a citizen journalism platform launched a few days ago, but operational for over one year. Midia Ninja are a group of young activists and journalists representing the ordinary protesters in the revolutions across Brazil, telling the stories of the people and showing the realities of police brutality. I came here for the World Cup and to Sao Paulo for the first match, but to watch much more than football.

We arrive at a proposed protest by the group ‘There Will Be No World Cup’, within close proximity to the stadium of the first match, but initially there are no protesters. Just a mixture of citizen journalists with DIY armor and low-tech devices, goggles and bullet proof vests, here to report on what is happening. Along with the journalists are the police. It doesn’t look like any police I’ve seen before. It’s riot police, an army, a presence that makes everyone feel immediate fear.  Without the presence of any protesters, they hit their riot shields with rubber truncheons like a tribal ritual, and they point their guns filled with rubber bullets at the DIY media that surrounds them. This is a strange moment. A confusion as to why there is this tension without any protesters. The citizen journalists move out of the way. The police are clearly more dominant. But the question of why this happened is discussed by the crowds of DIY media.

There is a larger protest on the street next to us, a manifestation – a discussion area filled with Brazilian drummers, speakers and quiet protesters. They have been there for a while. The Blackbox protesters, a group of more confrontational protesters begin to set fire to street furniture in front of a distant armored police line. It blazes. It feels hot on my face and I am stood a couple of meters away. The police are silent. The protesters are dominant. The fire blazes in front of a petrol station. It’s tense. But within minutes of this intervention, a mass of rubber bullets and tear gas is fired into the mix of protesters, media and people involved. People run, it’s madness. A blur of gas, smoke and feet; all running to get away from the quickly approaching police.

The protest curves onto a street, where the innocent protesters, drummers and musicians are present – a colorful mix of people creating a platform for debate and discussion. This is very quickly controlled by the police and the Blackbox protesters are consumed into the innocent protesters crowd. Everyone is finding a smaller space to maneuver. It gets heavy. An onslaught of rubber bullets and tear gas. People run frantically into the nearby sports hall a lot of people are hit by the gas. It’s chaos. I am hit with tear gas and am shaking. The police are indiscreet and ruthless. It’s a scary act to watch. The many colors of the balloons and flags disappear into the sports hall. People are shouting and frightened.

Everyone now finds themself in a confined space. The protesters continue as if nothing has happened. But everyone is aware, the police may enter at any moment. And if they do, there is no escape. It’s terrifying. I am shaking.

I run to the back of the space and throw myself over the wall, ending up in a nearby sex shop for refugee, where many of the worlds press gather to upload their encounters. The gringos are free. The police let us go. What is clear though, is that today, all decisions are theirs. The laws don’t matter. Your rights don’t matter. The police have been given a clear instruction: keep the protesters away from the stadium. And they ensure that happens.

Later that day, the people are dispersed. Some find themselves innocently protesting in front of a nearby shopping centre. It seems calm. A guy is shouting and about twenty people join him, just standing around. As if from nowhere, tear gas is fired. I inhale a lot into my throat. Although I can’t breathe, I still find the power to challenge the police a proclaim the word ‘why?’, there was no reason for this. There was no confrontation. Today it’s clear. The police make their own rules.

It’s an incredibly terrifying proposition. The people’s right to protest vs. the police protecting the capitalist monogloth that is the World Cup and FIFA and all its corruption. The people may not make an immediate win, but there is a long-term ambition here by Midia Ninja – a platform to show the hard reality of the revolutions as they happen on the streets in Brazil. The people’s story. Beautifully presented and written. It isn’t a DIY channel. It’s as good as any other news platform, but just not biased. The real facts.

What is clear is the power of the NINJA. The power of the mobile device as being as powerful as a riot shield or a gun. The police have to think twice about their actions. There are as many people reporting now as protesting, almost a blurred line between the activist and the protester. This is new for the police. There is an enforced transparency.

I join the NINJAs Rafael Vilela on the ground and Felipe Altenfelder in the HQ to report on what is happening pre the first World Cup match.

Ruth Daniel is a 33-year-old award winning cultural producer, entrepreneur and activist producing over 6o grassroots music development events in 25 countries. Based in Manchester, UK she has worked primarily in communities at conflict – working in the comunas of Medellin, Colombia; the ghettos of Venezuela; the favelas of Brazil and war zones to harness creativity to make positive social change. She has no fear and goes to places that others might not consider. The vibrancy of communities gives her fire to make the projects to bring about change and the realisation that when people come together they can make a powerful alternative influences all the work she does. She was in Cairo during the second revolution on the streets with artists of the revolution; in DR Congo with theatre makers and in Colombia with the hip-hop youth led movements. ‘Today was an opportunity for me to witness first-hand what I had been reading on social media. The reality of the police brutality was unlike anything I have seen anywhere in the world. All your rights as a citizen are lost today. The terror that the police imposed and the random and unjust acts of violence on normal people expressing their legal right to protest was frightening. I was tear gassed and a rubber bullet just missed my head. There is something so liberating about reclaiming public spaces and finding a space to challenge the status quo’

Rafael Vilela, 24 years old, is a photographer and founder of Media NINJA an independent journalism platform across Brazil reporting on the recent revolutions and protests. He is part of the Fora do Eixo Brazilian network and one of the protagonists in the creation of an international network for photojournalism. In 2011 his portraiture series called “CabeçasdePipa” received awards in four categories in the Prix de La Photographie Paris Px3. Rafael reported on all the protests today, on the front line as a Midia Ninja. He reported on protests on the streets by ‘There Will Be No World Cup’ and in the subway in support of the fired workers from the strike of this week. Rafael noted, ‘There has been an extreme rise of citizen journalists since the first protests last year. Before this there was no coverage from the streets and the mainstream media were not reporting the reality of the protests. The people realised the need for these stories to have a wider platform. Now you have many people in DIY media attire with simple technology, often outnumbering the actual protesters themselves’. The power of media has been realised and grasped by the people.

Felipe Altenfelder, 29 years old, graduated in Social Communication by the Federal University of São Carlos, Brazil. He is one of the founders of Midia Ninja, where he attended on actions such as the World’s Social Forum at Tunisia and coverage of the manifestations of June of 2013 at the city of São Paulo. Today Felipe was in the epicenter of the activity across Brazil, based in a collective casa (house) in Sao Paulo, bringing in all the photos and text about the action across the country, whilst maintaining a connection to mainstream media to produce a counter argument and an alternative viewpoint not covered elsewhere, acting against the repression of the social movements by mainstream media. ‘We didn’t know what would happen during the World Cup, it was hard to read the many dynamics, but it now feels like things can now get bigger. People are aware of what they can fight for and how that can manifest itself. They are not fighting against the world cup, they are fighting for more rights and democracy’.