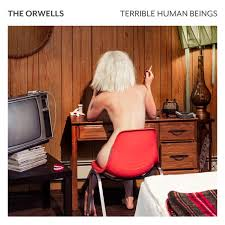 In David Foster Wallace’s Brief Interviews with Hideous Men, the reader is subjected to a slew of one-on-ones with some of suburban America’s most immoral and depraved individuals. Should they attempt another Hollywood remake, surely the soundtrack could be provided by The Orwells.

The public loves celebrated sinners, and The Orwells are further proof that hedonism and hellraising go hand-in-hand with mass adulation. However, their new album, the appropriately titled Terrible Human Beings, has more in common with the ‘human’ than the ‘terrible’. They’re still, unconsciously or not, in thrall to The Dandy Warhols – both in trashy chords and the decadent joie de vivre – but the looming threat of adulthood lingers large, even if singer Mario Cuomo promises a “cold grave when I die.”

They don’t stray far from their winning formula however, and the antagonistic bombast of Disgraceland is magnified in They Put A Body in the Bayou, a twitchy compendium of Courtney Taylor-esque guitar riffs, Cuomo’s restless growl and bone-shattering bass. “Told me, act your age / that’s why she’s underage” is just one of the many pearls of perverted wisdom that is spouted forth, while Black Francis and Fry are urgent slices of scuzzy, Buzzcocks-esque snarl.

Terrible Human Beings won’t save The Orwells from Hell, but it certainly means they’re free from oblivion. The loose narratives of growing up and starting again may be drowned out with bacchanalian abandon, but when living on the edge sounds this good, the risk of teetering over doesn’t matter.