February 2018 saw The Orielles not only go out on a nationwide tour but it was the month that saw this brilliant band release their long-awaited debut album on Heavenly Records. With their brand of raw funk, with hints of flamenco, blues, Santana type instrumentals and 60’s summer vibes, The Orielles are singing to a glorious beat. Matt Mead caught up with the band at the start of the tour at Nottingham’s Rough Trade store. 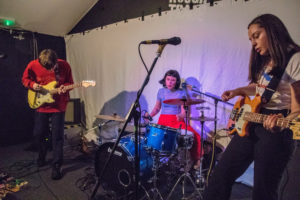 Having been introduced recently to The Orielles I was blown away how fluid and brilliant a band I had missed out on. With slight hints at 90’s era Happy Monday’s, A Certain Ratio, but with the band having their own originality to their brand of superb indie pop full of funk, stoner bongos, disco synth POWs and dreamy arch lullabies, this a band that is well on their way into the hearts and homes of those with a keen ear for the best record collection.

With a packed crowd at Rough Trade baying for the return of the band, the band kick of proceedings with a new song from the album, Snaps. Flowing with ease into other newbies from the album, the band have a considerable ease, experience and flow of playing, one that is rarely seen at their tender ages, but with years of playing together, The Orielles have a recipe for success up their youthful sleeves.

Fan favs Let Your Dogtooth Grow and set closer Sugar Tastes Like Salt get the biggest cheers of the night, what with guitarist Henry Wadw filling in the crowd with anecdotes and also cursing (jokingly) sister Esme and Sidonie (Sid) Halford for their lack of interaction with the crowd, which is all met with fun and laughter including the band. Following the bands short set there was a band signing session after which I got to interview the band backstage, with Henry seemingly trying to escape the interview via the first-floor window where we were situated. Fortunately, Henry saved his injuries to later in the tour with a sprained ankle. 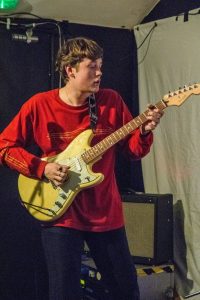 MM: If I can transport you all back in time and ask what was the first music you all got into?

Esme: My very first musical memory was being in the back of my parent’s car and they had Pet Sounds playing. I would be sat in the back of the car singing all the harmonies. At that age and time I never thought about singing, but when I reflect back at that time it was definitely a big influence.

Henry: Even though I didn’t know Esme at that time I was also influenced by sitting in the back of my parents car too, listening to the people music that was being played. But as we met together and started playing we noticed we were all into the same music. The very first song we all clicked to was The Pixies Here Comes Your Man. The Pixies were our first shared influence. That was a turning point. You can hear that influence still today.

MM: How did you all get to know each other and how did the band form?

Henry: I’ve reached the grand old age of 18, and I started to think of the very first time I met Esme and Sid. I actually started playing music with these 2 since I was aged 9, so I’ve been playing music for nearly half of my life. So when we’re playing together I can feel what Esme and Sid are playing and we just click together with our music. It’s an unspoken communication between us 3.

MM: You hear that spoken of in the best bands, whoever the band is, The Beatles, The Stone Roses and now The Orielles, when there is that little dust of magic in the air that’s where the greatness is. And for you 3 to have that is refreshing to hear.

Henry: you can tell that the manufactured bands don’t have that, and it’s more forced in their playing and output. 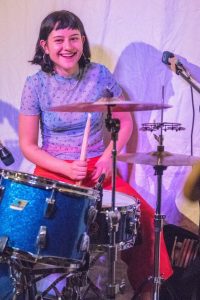 MM: I heard you on the BBC 6 Music Marc Riley show playing a brilliant session

Henry: I fucking love ‘Razza’. He’s been proper sounds with us from the start. When we did our first session with Marc I was into The Fall at the time and I was stood there with Marc (ex-member of The Fall) I said to him “I have nothing to say to you but at the same time I want to say everything!”. Big respect for Marc.

MM: So, going back in time again, what made you make the decision to form the band

Henry: After writing and rehashing and when we started to hear our tunes back to ourselves and when we played live there is something beautiful that happens between you and the crowd that you cannot explain.

Sid: You can tell it’s the start of the tour and he’s (Henry) is getting all emotional and sentimental (sic).

MM: How did you get signed to Heavenly records?

Henry: Long story man. We played a gig with at the Kazimir in Liverpool, which has now been knocked down sadly, which is where the guys from Heavenly Records saw us and we were on their radar since then. We demoed the album for them and they loved what we were doing which was a process of about a year for us. Things have just snowballed from there and here we are today with our album being released!

MM: Who are your musical influences at the moment? I know Jez Kerr helped you in your early years.

Esme: Jez has been the biggest influence to me being a vocalist and bass player.

Henry: Jez taught us how to write songs and play them.

MM: You hear a little bit of ACR in your songs with the whistle and the cowbell, but again it’s your own sound.

Henry: Yes there is that influence on the album but you cannot pinpoint the actual sound on the album. It’s our own sound and I think that is reflective of our years of playing together and vast influences.

Esme: When we were recording the record the sound of each song on the album reflects what mood we were in on that day. Also depending on what we had been listening to in the weeks before we were in the studio, this reflected how the sound of the album has come to be which were really pleased with. 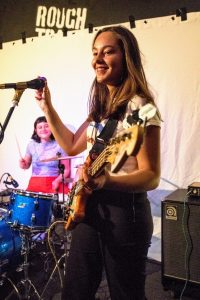 MM: Finally, what will be the next steps for the band. I know you have just released the album, but where would you like to see the band go next?

Esme: A steady climb I think. We are doing a lot of the festivals in the summer, and then Euope, and then we’d hope to play America because that’s been a dream of ours to play in the states, to see our fans out there.

Henry: In terms of gigs what Esme said is bang on, but as a band I don’t think we’ve even scratched the surface of our potential and where we can take it too.

Sid: We had a message from our manager the other day saying the album sounds great when’s the next demos coming, and that worried me a bit. We’ve only just released the album.

Emse: But with the next album we have the ideas all in our heads we just have to get it all demoed and out down in tape. Blue Suitcase was the last tune we wrote and recorded for the album so maybe that is an angle that we will go down for the next record. Who knows.

All pics taken by Nigel King. More of Nigel’s work can be found at his website.