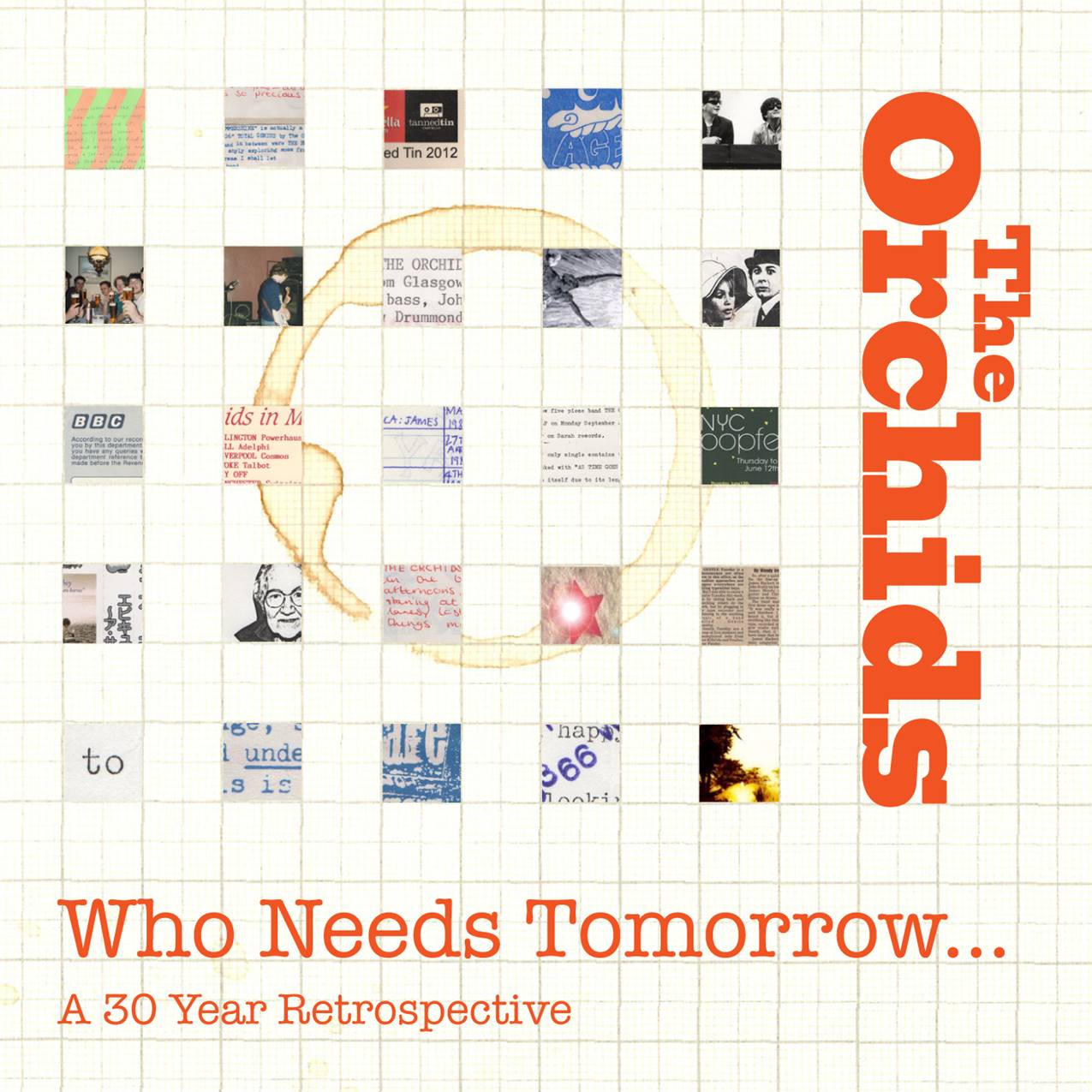 The Orchids – Who Needs Tomorrow

Subtitled “A 30 Year Retrospective” this is an anniversary “best of” from the Scottish six-piece plus a full disc of rarities……Ian Canty sees that Post-C86 Pop did prosper for at least a while in the face of the Acid House and Baggy onslaught, though the Orchids were not adverse to playing up the dance element in their music too….

By the time that Glasgow’s Orchids (not to be confused with Martin Bramah’s marvellous Blue Orchids) appeared with a flexi alongside the Sea Urchins on the Sha La La label, the hype around the C86 scene hype was beginning to die down. Specialising in tuneful and melancholic Pop Rock, you could have been forgiven for thinking that it appeared that they had “missed the boat”, but this was clearly of little concern to the band itself. Ardent in their pursuit of a good tune and more than capable of despatching bright and jangly Pop Rock, the Orchids were drawn very much in similar mode to their forerunners in the Independent sector, but sort to furnish the basic template with a few kinks of their own.

Obviously showing some promise, when Sha La La morphed into Sarah in 1988, the Orchids were to become one of the main acts on the imprint and also a driving force (in their own quite gentle way) on the then still thriving Indie scene. Even though the music press had moved on to the Next Big Thing (as is their want), the band cranked out a steady stream of produce for their rapt audience. Soon expanding to accommodate producer/keyboardist Ian Carmichael (not Lord Peter Wimsey, later a member of dance act One Dove) the band made moves towards the kind of indie dance style perfected by St Etienne during the early part of the 90s, but on the whole steered a straight-ish path of melodic, literate Pop/Rock. After the release of the band’s third LP Striving For Lazy Perfection, the Orchids split in 1995, though by 2004 they had reformed and have since issued a further three albums, the last being 2014’s Beatitude#9.

This new compilation brings together the best of the Orchids recordings from both incarnations of the band, accompanied with a full disc of rarities and demos. The bonus disc is probably the main point of interest for the band’s more committed fans, but people new to them get a decent enough introduction on disc one (though I expect converts will quibble about the track selection).

Beginning with the “best of”, Defy The Law with its synth washes and Garage feel has a touch of the early Teardrop Explodes about it, very nicely done. If the Byrds-like What Will We Do Next is typical of the sound of Indie of that time, there’s something of the Go-Betweens’ thoughtful beauty in there too (they cover Magic In Here, originally for the Grant McLennan compilation Love Goes On and that is one of the highlights of disc two).

As stated above come 1992 the band had stretch out from their original base to embrace some dance beats. The most effective effort here for me is Thaumaturgy, which develops from an acoustic beginning into a full blown anthem. There’s some nice organ work on A Kind Of Eden, but by the time of their comeback in the 21st century, the Orchids had re-familiarised themselves with their core values. They had also added these roots a world-weary air and even a slight Country Rock tinge creeping in too. They had aged pretty well with the stately Hey! Something being a good example of the band’s strengths in the present day.

With the rarities disc we go right back to that first flexi disc with From This Day. This track effectively sets out the Orchids’ stall – being a spritely piece of jangle pop, fresh and with a definite spring in its step. The Patience Is Mine slowly builds on a shuffle beat and the following Welcome To My Curious Heart belies its somewhat cumbersome title, being a pretty Folk-infused ballad. They re-cut one of their key tunes in Underneath The Window, Underneath The Sink especially for this compilation: its good to report that they still sound sparky today, a nice piece of stately Pop Rock.

Who Needs Tomorrow is a good primer for anyone interested in the band and the rarities disc may dangle an appetising carrot for the more confirmed fan too. Though always a little behind the zeitgeist so to speak, the Orchids definitely knew how to nail a good Indie Pop tune and imbue it with their own personal twist.