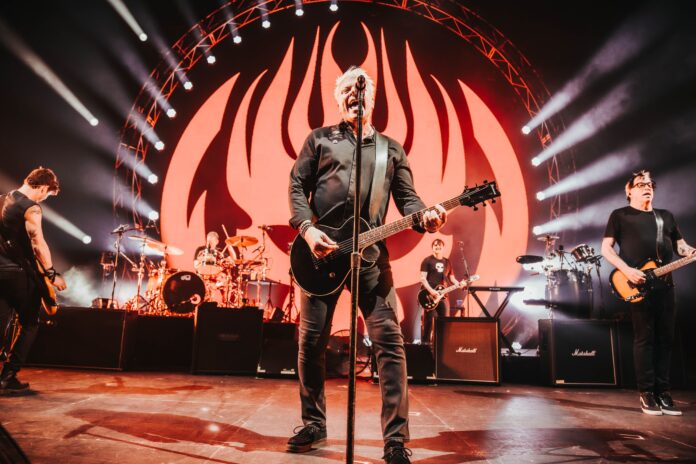 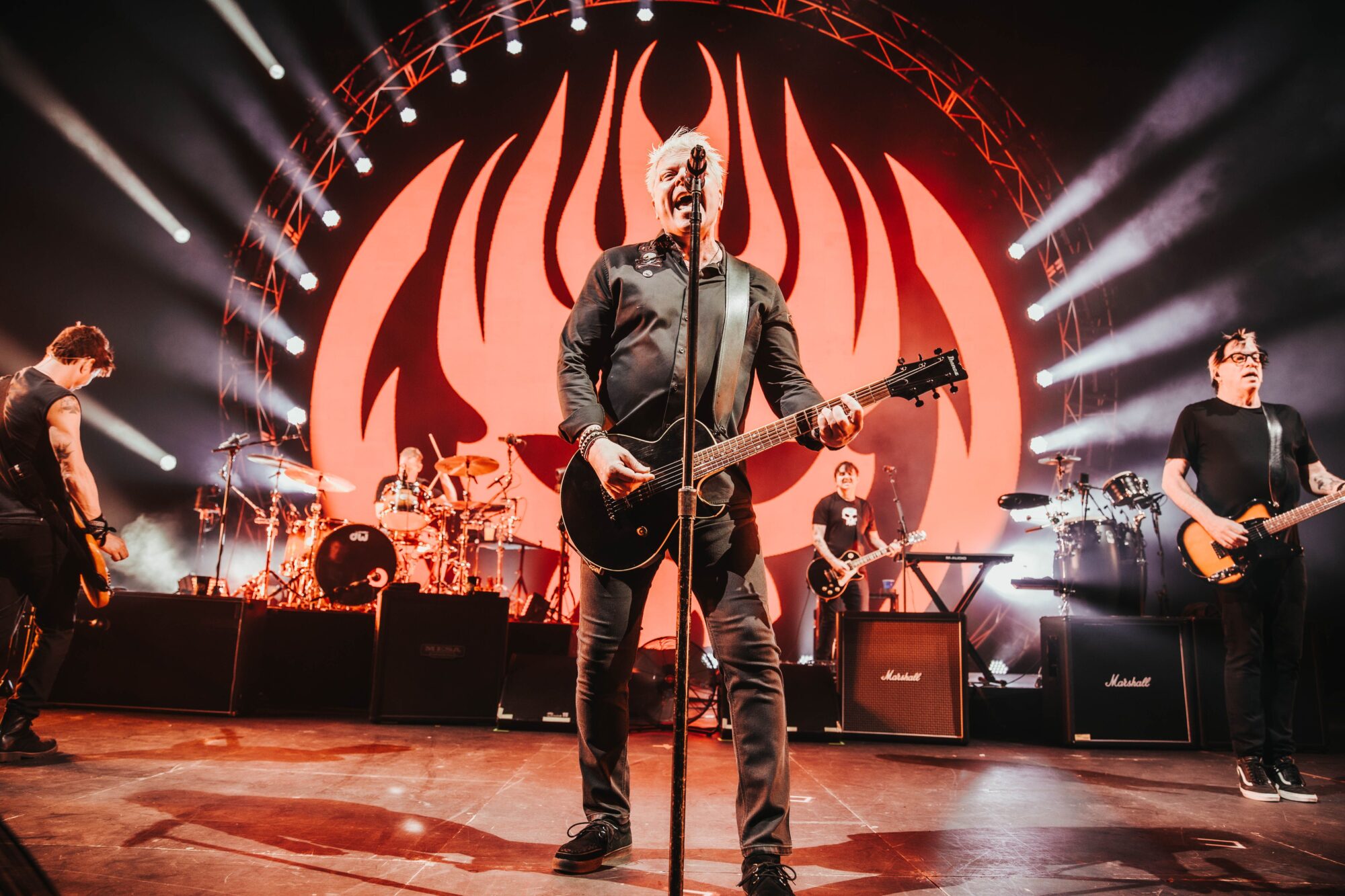 There’s not a great number of things that I particularly enjoy revisiting about being 15. Teen angst, social awkwardness, a complete inability to talk to girls and terrible hair (OK, the last one has never been properly addressed). But one memory that does shine through is filtering such angst and malaise through the filter of punk’s second wave arriving from the west coast of the USA (I eventually found my way to the original punk explosion of the late ’70s a few years later but I was nowhere near cool enough back then). Bands such as Green Day, NOFX and Rancid provided me ample opportunity to amplify the sense of unease in myself, however, it was a breakout release from a group of misfits from California who most made an impact. The Offspring’s 1994 album Smash became a firm favourite of mine on repeat through my AIWA hi-fi mini system; testing the limits of my flimsy speakers, and also the patience of my parents who must have finally realised the price that comes from middle-class teenager attempts at rebellion as I screamed the swear-tastic acapella section from Bad Habit…

Twenty-five years later (and twenty-two since I last saw the band live) I am back with The Offspring again on a cold and wet Monday night at Manchester Arena. Assorted faded black punk t-shirts bedeck the crowd members as they filter into the arena ahead of opening act Bob Vylan, who is quite superb. Bouncing between driving rhythms, sub-bass, breakbeats, and fierce, uncompromisingly direct and relevant lyrics about the crumbling state of the contemporary UK, they are a surprisingly raw and yet brilliantly appropriate choice to open the show. As with so many bands emerging and breaking from the UK underground scene, they are the nearest thing we have to the original ethos of punk and, despite being first on the bill at 7pm, they are pulling no punches. Some crowd members seem somewhat turned off at the unflinching honesty of the set but many more look completely drawn in by their sheer power and articulacy. Make no mistake – they are one of the most exciting bands emerging at present and they do not look out of place on such a major stage. Expect much more in the years to come. 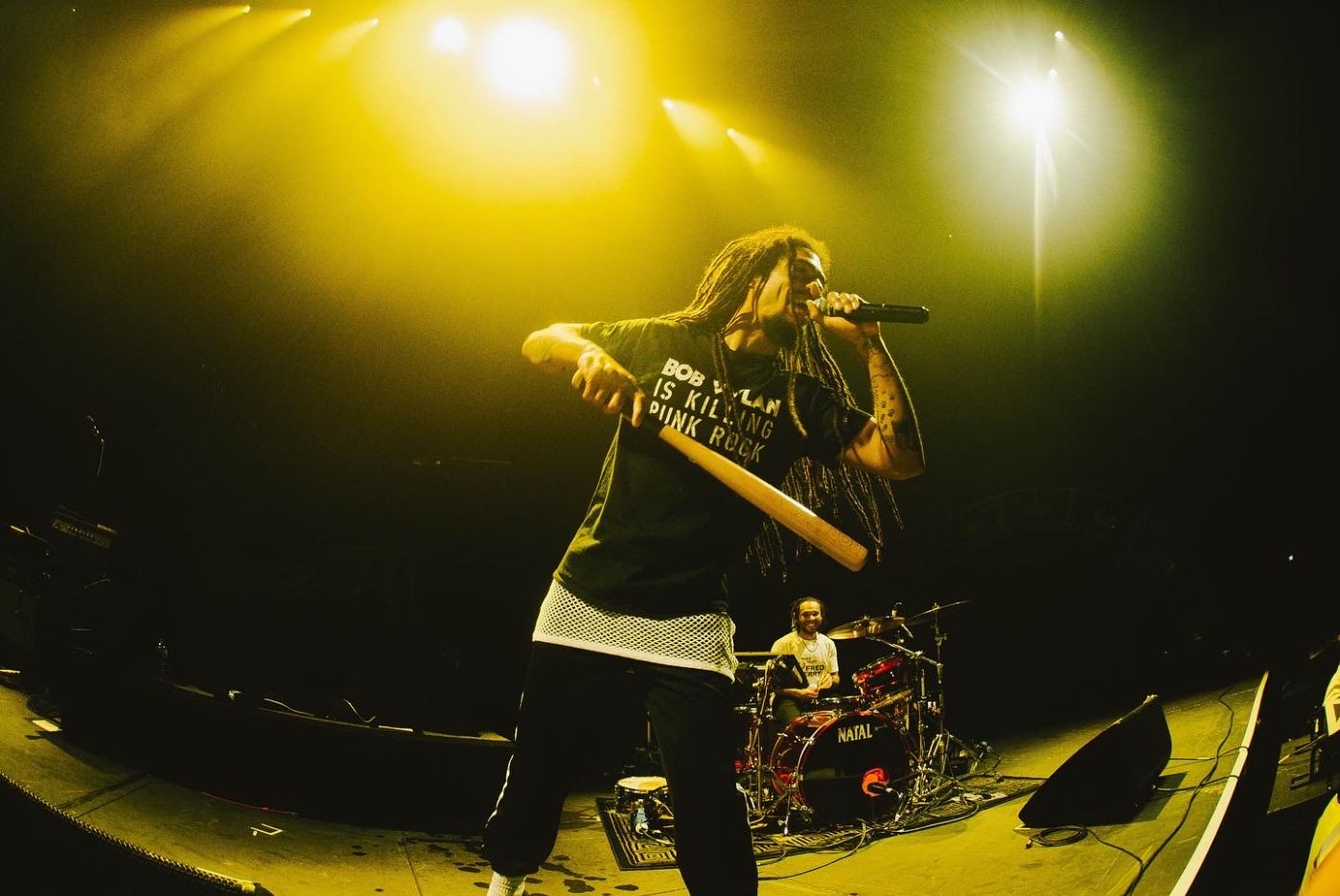 In contrast, few people need introducing to The Hives. They are exactly as you expect, by which I mean gloriously fun and engaging. From the first moment they emerge to the clang and stomp of Come On to the concluding Tick Tick Boom, they are a riot of tightly drilled musicianship and performance stagecraft. ‘Howlin’ Pelle Almqvist is his typical ringmaster-self, clearly revelling in the opportunity to win over hardened Offspring fans and using every song break to extol their virtues: “You are probably thinking right now – who are these young men? Why are they so good?!”. But the music speaks for itself and for 40 minutes we are led through a finely-honed set of intelligent and engaging garage rock anthems. It is true that the best moments arrive with the bigger hits (Hate to Say I Told You So and Walk Idiot Walk) but Almqvist is as funny as any professional comedian and the set flies wonderfully by. Before the time is over, he has a whole arena screaming and the standing section crouched down on the sticky floor with a mere command. In terms of winning the crowd over, I would confidently say that is a job done, and a job done well…

The Offspring are magnificent. Which is a pleasant, and somewhat unexpected surprise. That sounds like damning with faint praise, but hear me out. The last time I saw The Offspring was at Leeds 1999 which was in the middle of a summer tour that included the infamous Woodstock ’99 festival (do watch the documentary if you get the chance, though prepare to be horrified). My abiding memory of that show – which coincided with the band’s unexpected rise to the mainstream on the back of their Americana album – was a somewhat crass sight gag where Dexter Holland came out and beat a set of dolls masked up as The Backstreet Boys with a baseball bat. It was the sort of tacky MTV Jackass thing that was perfectly acceptable in that strange fin-de-siècle period but having not followed or seen the band since then, I was expecting similarly wearisome frat boy humour.

Instead, we get a band genuinely at the top of their live game. Blending their poppier moments carefully between their rough and raw punk tracks, the set seems like a perfect balance between the two sides of the band with both blending symbiotically. They come out early with a storming Come Out and Play juxtaposed directly against I Want You Bad and both seem entirely suited to each other. As a live band, they are as good as you could want – Dexter Holland and Noodles playing off each other and running the whole width of the stage and swapping places to whip up the crowds at the side. New bassist Todd Morse fits in perfectly and the crunching three-note bass intro to Bad Habit immediately sends the crowd into a frenzy before the song fully ignites the mosh pit and a plethora of stage divers emerge from the throng. 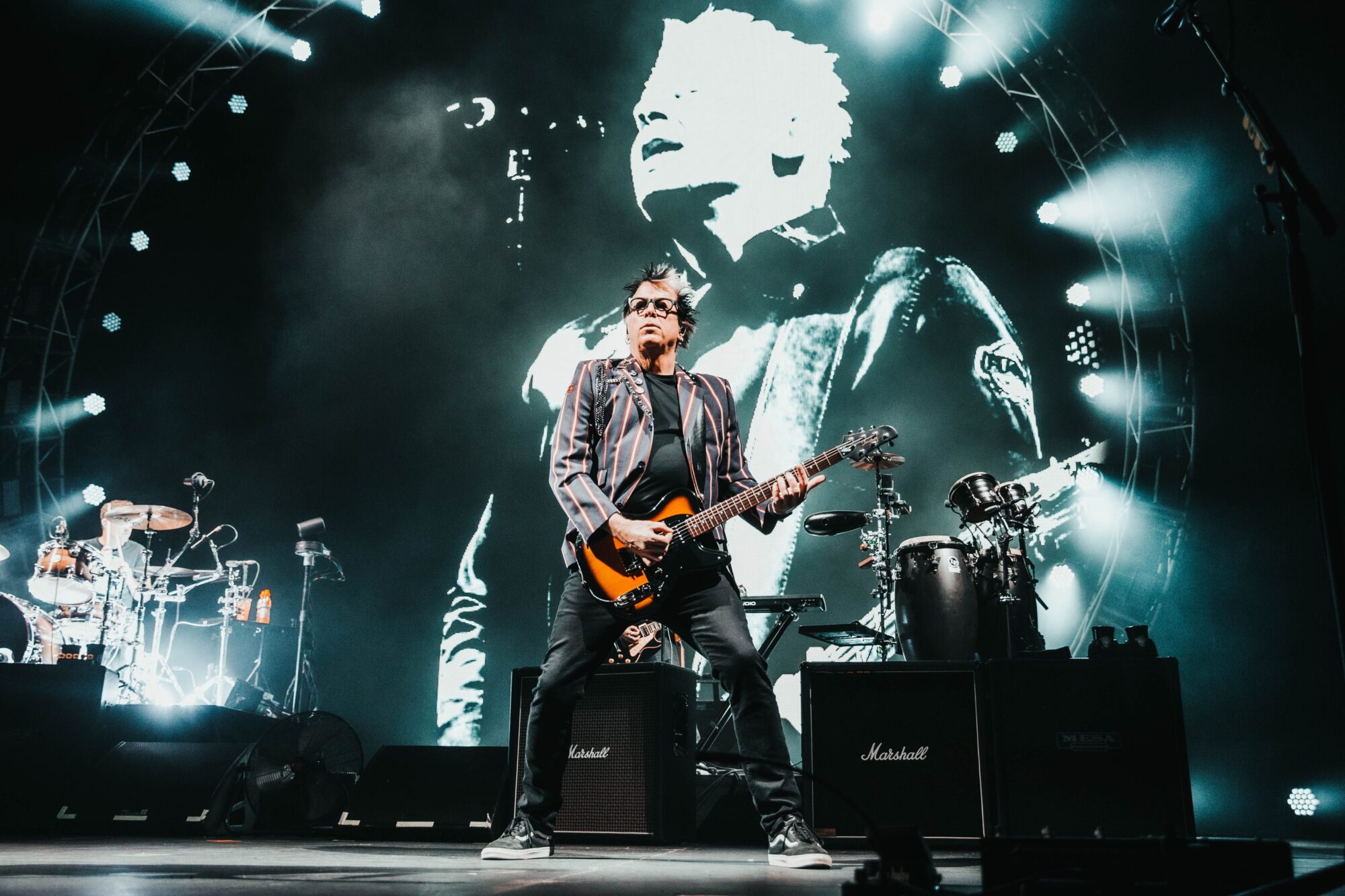 The tracks from the new album Let the Bad Times Roll sound fresh and energised, and the natural chemistry between the two mainstays of the band shines through. Noodles, in particular, is on tremendous form tonight – jamming with a cartoon avatar of himself in a section called “Noodle Plays with Himself” (Fnarr) and also enthusiastically praising a young lady on the right side of the crowd for smoking weed before throwing her his beer (caught first time apparently). Though it is primarily the music that carries the show, just like The Hives before them, the humour is central to their whole ethos and performance. But there is true warmth here, and the bond between band and crowd is something genuinely touching to behold. 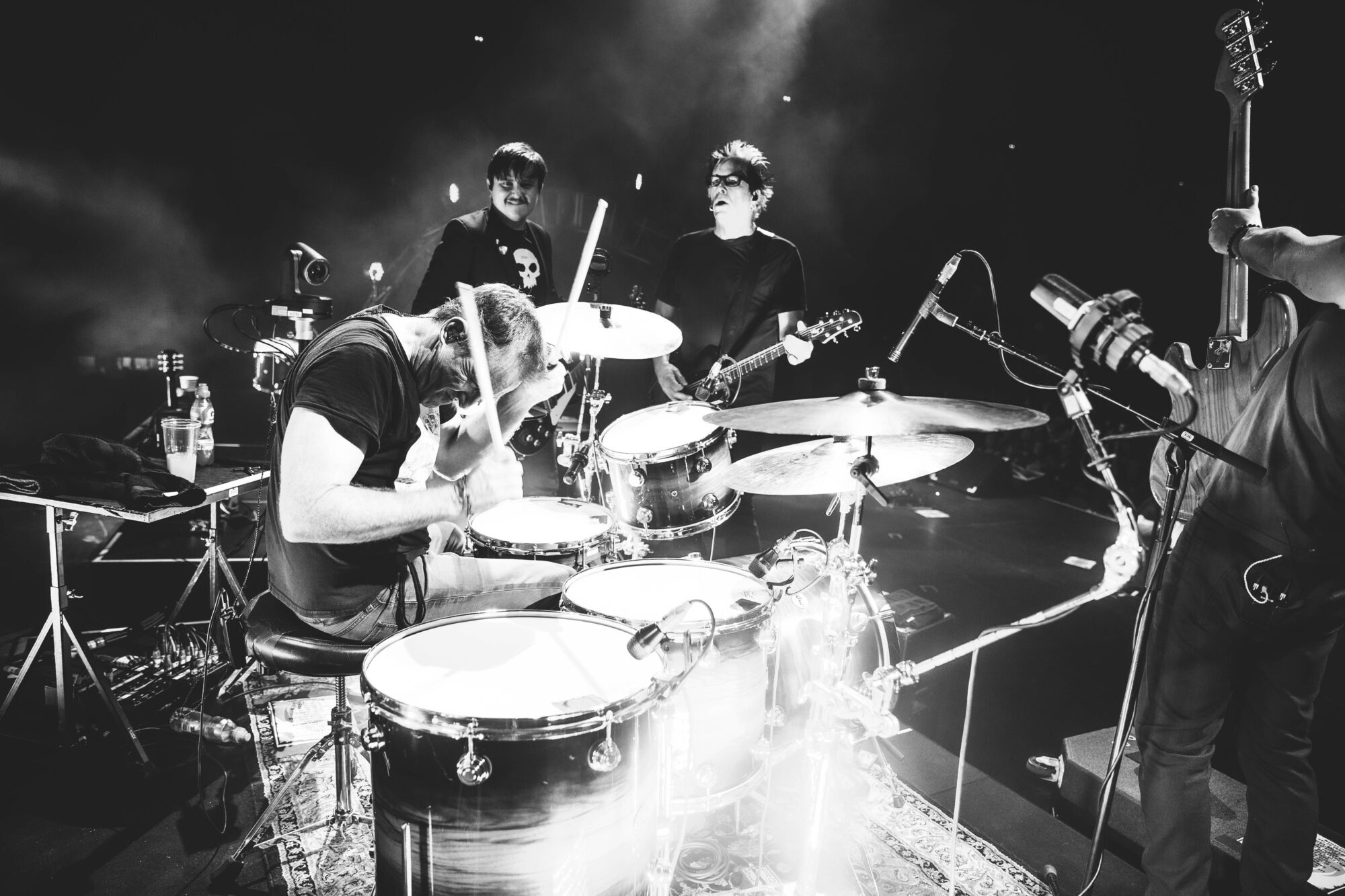 Occasionally, Dexter’s voice feels as if it is fraying on some of the higher melodies (unsurprisingly at the end of a long tour) but he never pulls out of any scream, shout or chorus. And though the solo piano version of Gone Away doesn’t quite strike the necessary poignant tone, the final third of the show is a truly joyous riot. The twin-punch clamour of Why Don’t You Get a Job? and Original Prankster land with total accuracy and there remains something goofily and bizarrely wonderful gratifying about Pretty Fly (For a White Guy). Yet this is a band who can also then deliver something as scabrous and sobering as The Kid’s Aren’t Alright straight after. This ability to blend the serious and the silly is a genuinely difficult thing to achieve, but they do it with consummate ease. A swaggering, explosive Self Esteem closes the show with Dexter Holland humbly thanking the crowd for sticking with the band over the years, before we head off out into the rain and the wind – beaming and truly satisfied. There is nothing better than a gig that genuinely takes you by surprise, and on a night where I was most excited about the two support acts, it is the veterans from California who somehow come through swinging for the win at the final bell. 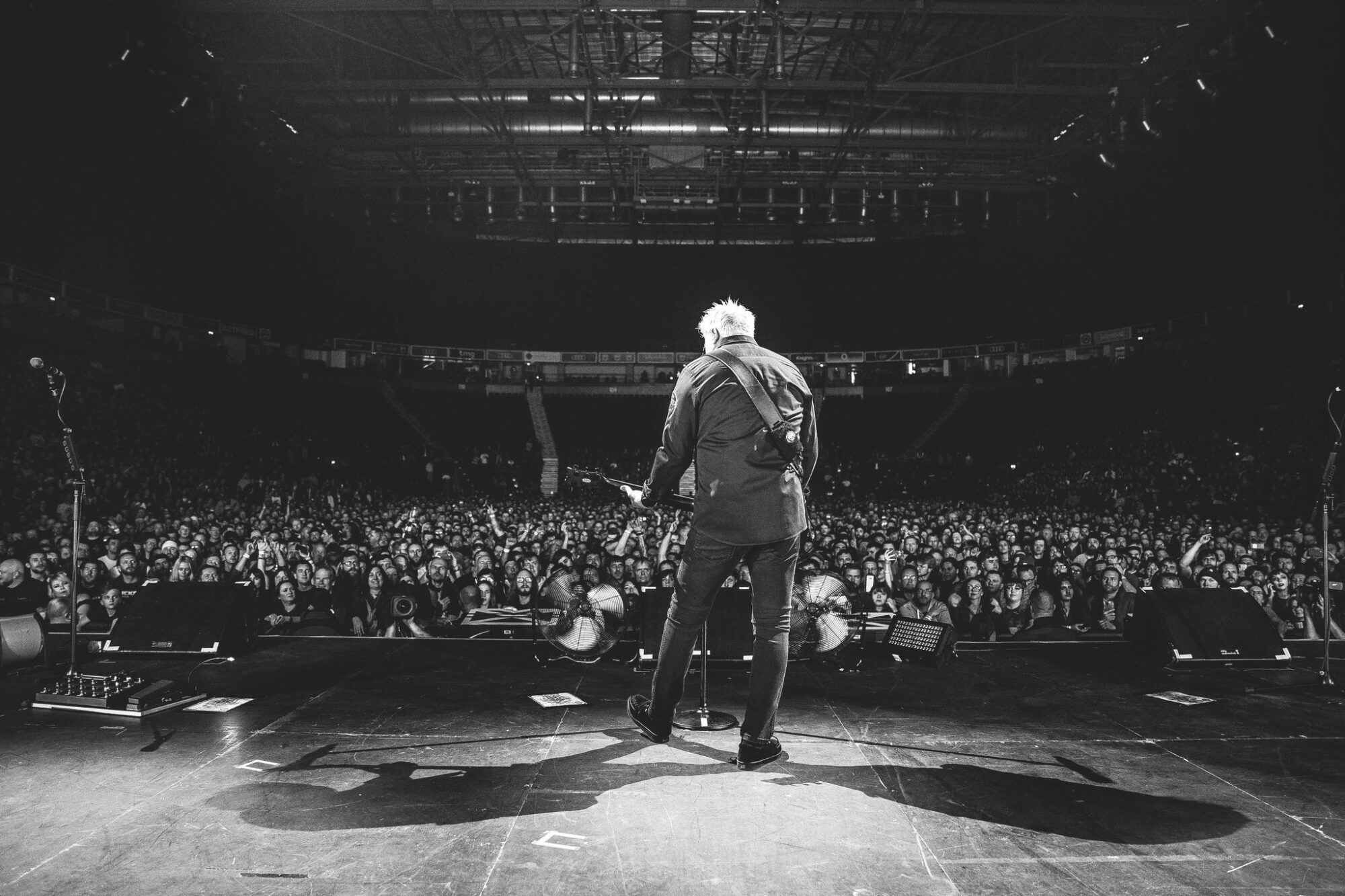