Home Blogs The Offenders: Endless Struggle​ | We Must Rebel​ | I Hate Myself... 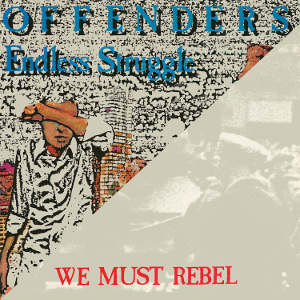 My introduction to The Offenders was in 1984 or ’85 when I bought the P.E.A.C.E. double compilation album (R Radical Records), to this day still one of the finest international compilations I have ever heard.  The Offenders’ track “Face Down In The Dirt” was one that became an instant earworm – a screaming hardcore thrash assault.  Fast forward to 2007 and I am on tour in Europe with my band Whole In The Head and we get to play a couple of dates with MDC (whose singer Dave ran R Radical) and their bass player was one Mikey Donaldson – AKA Mikey Offender.  He had also played bass on half of MDC’s first LP “Millions of Dead Cops”.  He was an incredibly friendly bloke and we shared more than a couple of drinks, but boy could he handle a bass! A few months later we heard Mikey had passed away in a squat in Barcelona so I decided to track down an Offenders album. Now, Southern Lord have made that job of tracking their stuff down a lot easier as they have seen fit to release a retrospective double album featuring 1985’s “Endless Struggle”, but also “We Must Rebel” from 1983 and a couple of tracks from the “I Hate Myself” 7 inch.   I’m not usually impressed by all this “re-mastering” nonsense but in this case it really makes a difference, giving this listening of “We Must Rebel” some raging power my vinyl copy always somehow lacked (maybe it was a dodgy pressing on the reissue!).

The drums are played at break neck speed, but Pat Doyle rampages round the whole kit rather than just sticking to the bass drum/snare/cymbals that some thrash merchants use as a shortcut.  To quote MDC’s X-con Ron: “Across between muppet Animal and Keith Moon who dropped Thrash LSD and had a bad trip on the drums.”  Mikey’s bass occasionally wanders off to play lead and the guitarist, Anthony Johnson came up with some licks that Jimi Hendrix or James Williamson would have been pleased with – but at least twice the speed they could play.  Unfortunately, he too is another veteran lost from the world of harcore, having lost a battle with lung cancer in 2012. Vocals from JJ Jacobson are mostly shouted in a gruff manner delivered at a tempo to suit the music. Style wise, they are somewhere betwixt Dave from MDC and Jerry A from Poison Idea.  Songs are good old 2 fingers in the air Fuck You, Fuck Society, Fuck the Police, Fuck the KKK, leave us punks alone tirades.

It’s no coincidence that the Offenders sound similar to MDC.  Apart from sharing Mikey at a couple of junctures (JJ also provided some vocals on the first MDC album), both hailed from Texas along with D.R.I.  Now there was either something in the water or perhaps a fear any given gig would get busted by the cops at any moment maybe prompted the speed of their music – at the time way ahead of most other stuff.  If you think back to how fast things weren’t in the early ’80s you realise these guys were hardcore pioneers.

Trying to describe this band, I realised that if I was to play them blind to someone who didn’t already know them I would be un-phased if they suggested I was playing MDC or Posion Idea.  If that floats your boat you could do worse than track this down, but if you’re not certain, maybe try and get hold of one of the re-releases of the PEACE album first.  You won’t regret it.

Alternatively take a listen here or check The Offenders on Facebook.

Another punk review by Nathan Brown. You can read more of his ramblings on his Louder Than War author’s archive here.