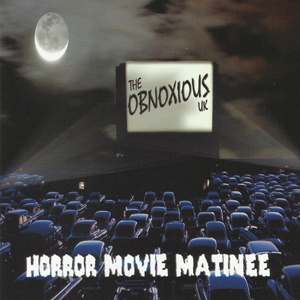 I think, this is the debut full-length album from The Obnoxious UK a Birmingham based four piece; the review copy courtesy of STP Records was literally just the album, no accompanying information – from a bit of research it seems that ‘Horror Movie Matinee’ is the follow up to the 2013 7trk EP/Mini LP ‘7 Songs For The Dead’ – six of the tracks on that release are included on this album.

The macabre song titles, including ‘3 Dead Souls’, ‘All Hallows Eve’, and ‘Cadaver Doll’ suggest an always welcome horror punk theme, but opener ‘Drinking With The Dead’ injects a solid blast of hard-core punk into proceedings, the track builds around an infectious guitar riff, and gravel ripped vocals – the only thing wrong is the production, sadly this stretches across the entire album; clearly this is a small label release, and I’d hazard a guess the band didn’t have access to Abbey Road Studios, however there are some decent punchy tracks here that are not being allowed shine – ‘Drag Me To Hell’ is a case in point, a rollicking psychobilly stomper that harks further back to revved up 50’s biker rock, if The Meteors had recorded this one it would have melted your face…

‘Loaded Roadkill’ is lifted from the ‘7 Songs For The Dead’ EP – this one motors along, a collision of sleazy rock ‘n’ roll and punk attitude, the lyric spat out over a pounding beat…’Elvis Is Dead’ took me by surprise, well initially – opening with a faithful rendition of ‘Suspicious Minds’ I was looking forward to just how this would progress when the track turned on its bequiffed head and morphed into a Macc Lads style lament at the passing of the King complete with the tender line “died on the shithouse”…I’m sure it works well live, but on record it’s just unnecessary.

The Obnoxious UK have certainly not mined the pit of creativity, that said they are clearly well capable of crafting a horror punk staple, ‘God For A Day’ has a real anthemic punch the air feel to it, energy driven in your face punk rock with a salacious smile, whilst ‘When Angels Fly Away’ leans towards more traditional rock – ‘3 Dead Souls’ could be the stand out track on the album, a primitive drum refrain, leading us into a brooding shadowy world, slower paced and with a less affected vocal; with the right production this could soar.

The Obnoxious UK are a good band, they have chosen the path they wish to furrow, at times they sound like The Misfits…on a vastly reduced budget, there are elements of The Meteors, perhaps even the Clash – it’s just such a shame the album is hampered by its production failings.