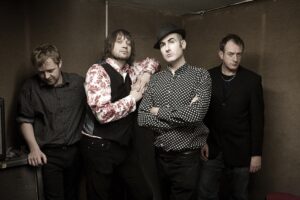 The November 5 have been making name for themselves on that London bar circuit that developers are so keen to turn into chain coffee bard and piped music from Satan.

They are one of the reasons that the circuit is so invaluable. Their crafted yet spiky guitar pop defies gravity and is laced with neat melodic touches and flourishes that has all the classic hallmarks but also comes complete with their own magic.

They grew up in a time when music meant everything and you can hear it in their defiant songs that have a sure touch and great hooklines and are platforms for all their favourite psychosis and neurosis.

A Little Knowledge is the brand new single by rock’n’roll firebrands The November Five (b/w another new track Hot Cell) and is released on March 9th by Montauk Industries. The first new release since their explosive and critically acclaimed debut album, If You’re Satisfied You Are Dead, A Little Knowledge not only continues their sonic journey but also expands upon it. Indeed, contained within its grooves are a rare combination of intelligence, righteous anger and a fierce energy rooted in classic melodicism.

A Little Knowledge and Hot Cell were produced and mixed by The November Five and Simon Trought & Giles Barrett at Soup Studios in London.

You can stream the tracks here:

Having recorded sessions for Xfm’s John Kennedy and Resonance FM and sharing bills with Glasvegas, Clinic and Little Barrie among others, The November Five have been rightly recognised as one of London’s most incendiary live bands thanks to their notoriously hi-octane and no-holds-barred shows.

The November Five will be touring the UK in March. They play:

“In The November Five’s hands, guitars do, very much, squall” – The Quietus

“The November Five are gathering momentum and things are only going to get bigger” – Vive Le Rock.