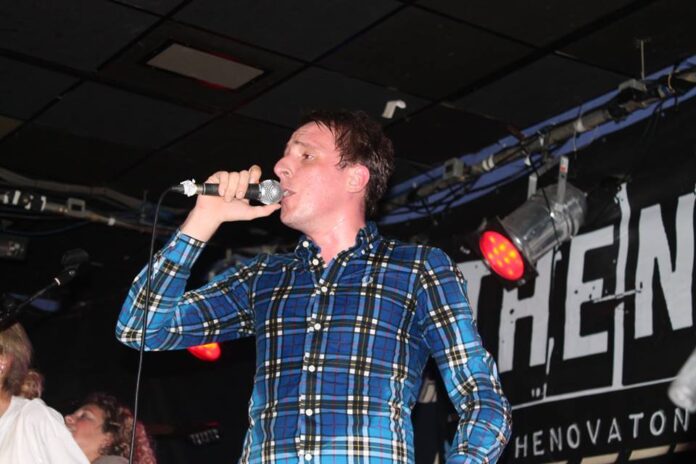 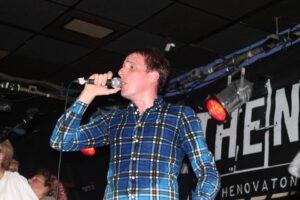 The defining moment of this gig was when, after another blazing power-pop gem, The Novatones Formation Dance Squad caught their breath and one of them chucked a shiny new white T-shirt up to frontman Ant.  Puzzled, he unfurled it and held it up to read the slogan on the front in big red letters; Anthony Pittman Is God, it said. He laughed with a mixture of shock, pride and embarrassment and put it on over his Ben Sherman and cranked up his guitar…

The Novatones (Mark 2) are back. The first line-up imploded shortly after my LTW New Band of the Day interview last year. 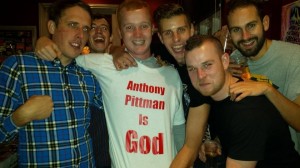 The new guitarist and bassist have the looks of a young Johnny Marr and Alex Kapranos respectively and play like pros and have the onstage moves to match. The funny thing is that Mackenzie Gordon-Smith (lead guitarist) and Toby Hornby-Patterson (bass guitarist) both have double-barrelled surnames which could lead to the accusation of (whisper it) poshness! “Toby is well spoken but Mackenzie has been dragged up like the rest of us.” Ant told me later.

Three hand-picked support acts made this a Saturday night to remember.  I missed young mods The Costellos who seem to have a touch of The La’s about them. The Old Age Punks were, as you can guess, a punk-hits-covers band who, despite a dressed-down, no-gimmicks, cranked-up approach, went down a storm with the under 30s.  The Reaktors showed how they’ve improved with a few more gigs under their belt. Brian’s Oi-Ois and the catchy choruses getting the crowd dancing and singing along (despite having never heard the songs before!).

It was The Novatones night, though, and Anthony and his gang owned the place with their swagger and barrage of great tunes. The God T-shirt was a bit of an in-joke. The Novatones are a band of the people. Completely down-to-earth lads. No hipsters or beards in sight, just mates, family and live music regulars who all agree that The Novatones really can’t get any better at what they do.

Despite the departure of self-confessed Libertines fan Tony, The Novatones still have a feel of The Libertines about them. They are fast and tight, yet tuneful and loose at the same time with an unbridled positivity.   The new songs from the forthcoming Sunday Romance EP mix in perfectly with the older material and the no longer a surprise encore, a slamming cover of Killing In The Name Of, is a revelation, a contradiction (apolitical Britpopsters play US politico-grunge anthem) and absolute perfection. Everyone jumps around like Mexican beans on a hotplate.

By the time this review is published they’d have played a couple of gigs Up North and in Scotland and hopefully they’ll be as appreciated there as much as they are at home, at least by those that think the wheel don’t need no re-invention.

All words by Ged Babey, find his Louder Than War archive here.