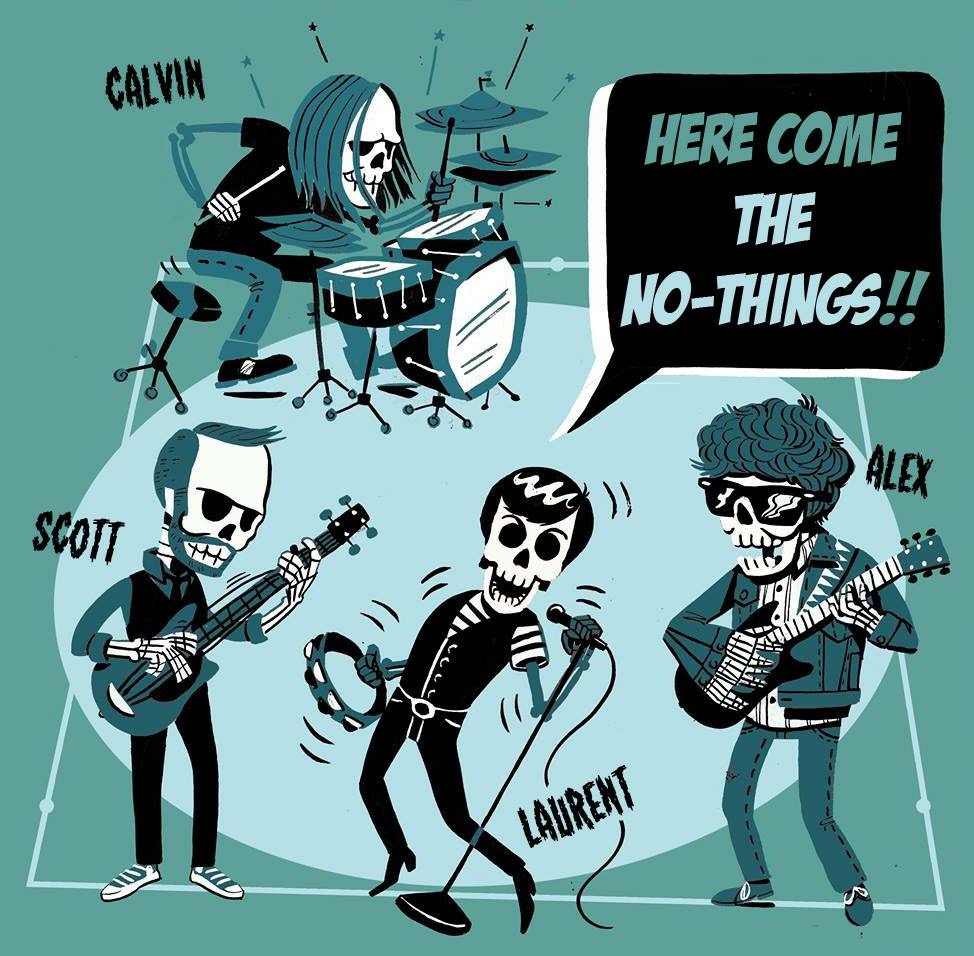 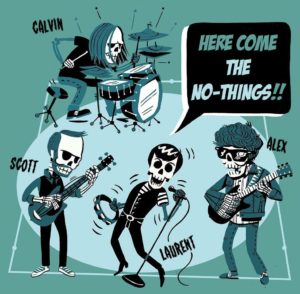 Much as it pains me to say it as a proud Glaswegian but Edinburgh has always had an excellent and thriving  garage rock scene. Dating way back to the days of the early Eighties, bands such as Thee Telescopes, The Thanes and a dozen others were hollerin’ and a-screaming and making a holy racket in the dark, damp basement venues of the city’s old town. Club nights, fanzines and record labels sprang up and disappeared within months and bands swapped members with alarming regularity. All of this made for a feverish scene which birthed some brilliant records and many memorable shows.

The scene remains alive and well and of course, Glasgow and elsewhere have caught up to an extent. The latest band of capital city reprobates to cut a slab of vinyl are The No-Things and this one, honestly,  stands head and shoulder above lots of the competition. The problem with a lot of garage-style records is that they often take the primal/primitive/DIY thing completely literally and forget that one crucial ingredient that made all those one-single-and-split bands of the Nuggets/Pebbles era so good; songs. Yep. It’s all very well being authentic sounding and having a Burns Bison guitar and an original Selmer amp or an old Gretsch kit. You can have all the pointy boots and bowl haircuts you like but if you’ve no actual tunes to back it up, it’s always gonna be pretty throwaway. The other positive The No-Things have in their favour is their secret weapon; the voice of singer Laurent. This is a man who can do the full-throated, Sky Saxon or Roky Erikson roar or a more delicate, deliberate vocal, often in the same song. He’s also got a fair bit of the old Jagger-swagger about him, too.

The No-Things have based their whole approach on having songs that actually are that. These are no novelty, kitsch-y things; these are memorable, hook-filled, clever songs. Opening song “Don’t Get On My Tits” would have you think otherwise by its title but it’s a smart, call-and-response slice of buoyant energy that positively sizzles along.  With a neat guitar line and a bubbling bass, it opens proceedings sweetly. The coursing harmonica swells add a nice texture, too.  “I Know An Old Woman” has a strutting riff to die for and the feel of The Sonics is never far away. The backing vocals are a clever touch, too.

“Diamond Ring” is the pearl, pun intended, herein; this one has a chorus made in garage rock heaven and is as classy a song as I’ve heard in a long time. It’s got it all; sassy lyrics, a climbing, soaring chorus and the band lock into the song and just hold themselves in check as the tension builds. Cymbals sizzle, maracas shake and the guitar verges on fuzz overload at times among its chiming chords. The little pauses between sections are solid gold.

“The Dollar Bills” is similarly excellent. They rarely stray from a tried and tested formula but they do it with a little bit of edge and hint of class that many of these type of bands miss. It’s psych-y garage rock, hell yeah, but it has an elegance about it that sets the bar a little higher. That harmonica wails away, again, in this ‘un and adds a sharp touch.

“J’vais Etre Riche” (“I’ll Be Rich”, thank you, Google Translate!) sees front-man Laurent sing in (I presume) his native French. He’s got a power about his delivery that, again, transcends the typical vociferous yelp of most garage records. ” The Norvin” is apparently (according to guitarist Alex) about a creature who comes from the planet of Norvaru  and whom sells oil and gas to intergalactic passers-by whilst dreaming of chocolate foam, miracle tones and magical stones. Allegedly. I reckon these lads may be certifiable.

It is, however, a pulsing beast of a song and the bridge vocals of “he’s a dream man, he’s a green man” lift the song to great heights.

“Purple Dance” fairly hurtles along; the needling guitar figure has a tiny bit of Gang Of Four post-punk to it and “Who Did You Rob, Bob?” takes the familiar Brit-invasion R&B formula and kicks its head in. With added harmonica for good measure.

The album will also be released on good old vinyl on 28/10/16 on Soundflat Records to compliment the CD and DL release which is out now on CopaseDisques.

Buy it. You will not be disappointed.