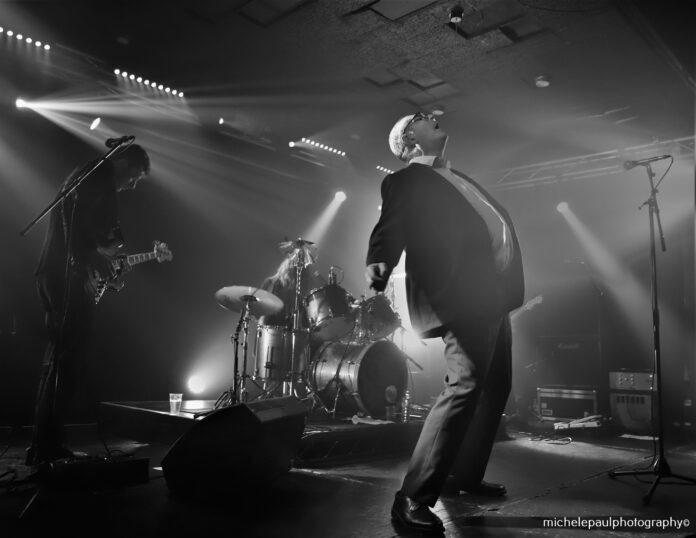 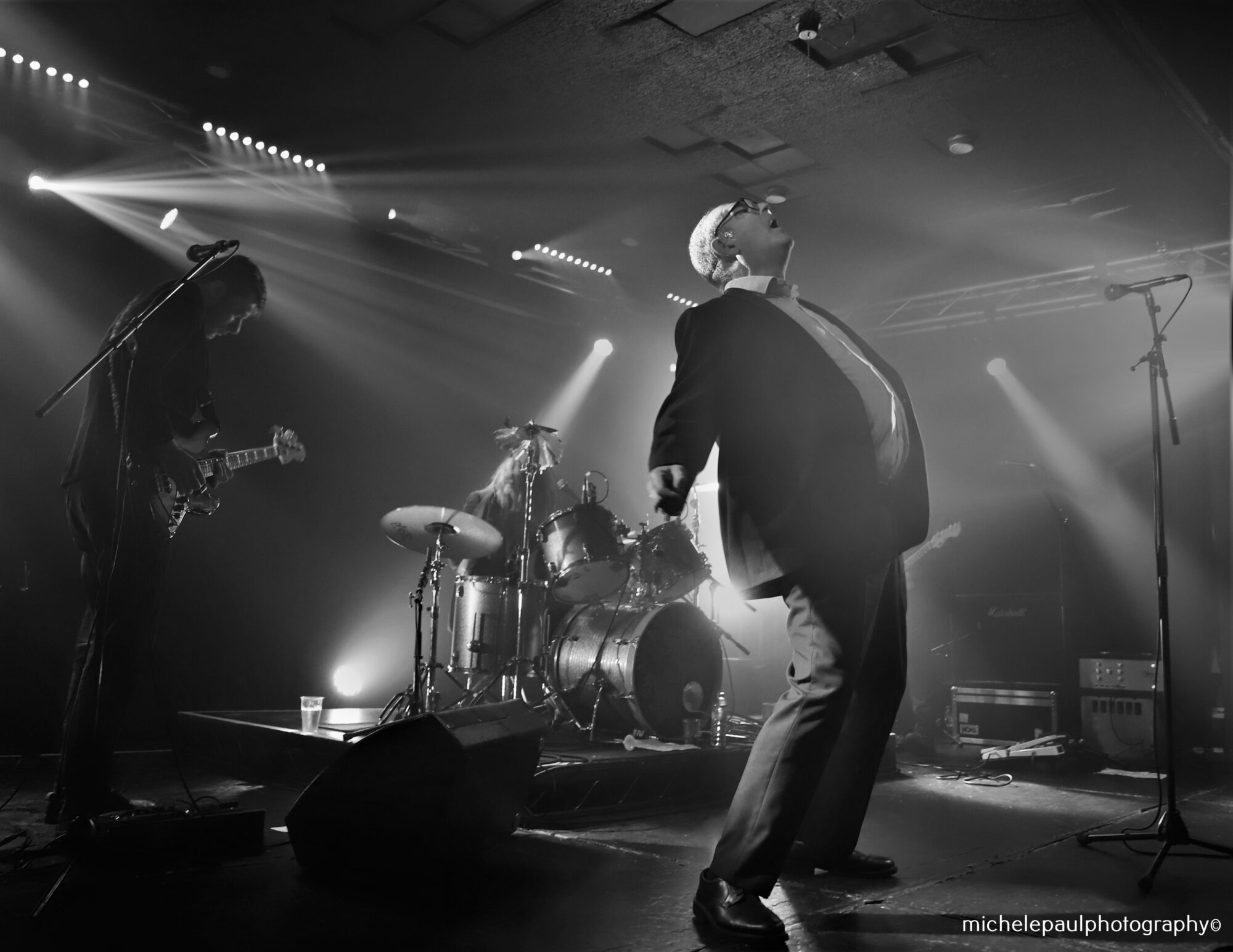 The delayed Four Against Fate tour reaches Pompey and the stars of the King Rocker Gales Doc are on top form…. has the exposure and bigger audiences changed Nightingales asks Ged Babey?

Nah!  Of course, it fuckin’ hasn’t. The opening line of the first song is still.. I was as dry as a dead nuns cunt in the desert!

To say the Nightingales are ‘on fire’ and never been better is an understatement. They are the most professional and accomplished they have ever been. Fliss, Jim and Andreas are so incredibly in-tune with each other musically it’s just a delight to watch. It gives room for Rob Lloyd to prowl and growl and croon and bellow his tragic-comic bar-stool philosophising and poetic verse to the attentive audience.

There is an almost Ramones like pace and no gaps between songs. No showbiz greetings or banter. Nightingales mean business. Jim and Andreas are positioned at the back of the stage, shrouded in shadow. Fliss is a mass of flailing hair and sticks. Her beautifully fucked-up cymbal is her trademark. It’s an almost ‘gothic’ presentation, reminding me of mid-80’s Sisters of Mercy in terms of lighting and concentrated ‘heaviness’.  For an oddball band dressed in suits Nightingales really do ‘rock’.

The only technical hitch came from the sound-desk with the guitar too low and Fliss’s mic feeding back during Thicko Rides Again- but it meant you could hear what a monstrously good bass player the dashingly handsome Andreas is.

It can never be said too many times that Fliss Kitson is the most awesome drummer in the country (as well as being the bands tour manager/press officer and an all-around fab human being).

Jim Smith is an unlikely looking guitar-hero and comes into his own on the Top Shelf and set closer The End Began Somewhere. Remember the Gales had two-guitarists for some years -so he kinda does the work of two men. 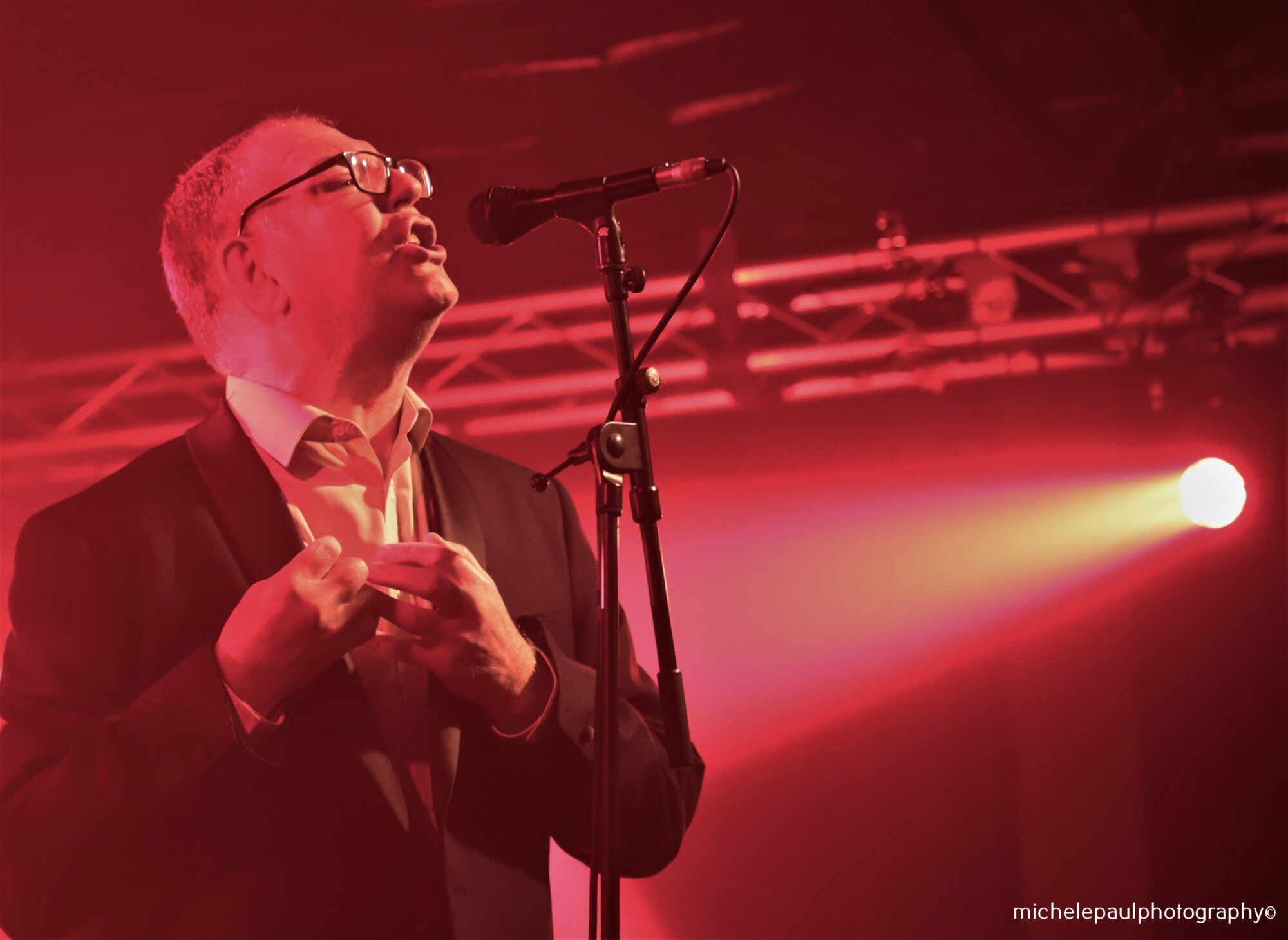 Rob Lloyd has never been so on-task onstage.  Just one glass of whisky during the set instead of the ever-present bottle of old. He caught sight of me in the front row and grinned but wouldn’t be put off his stroke.

I hoped to see him afterwards to trade the usual insults ( Hello you fat cunt / Why have you got a girls hairstyle Ged?) but he stayed backstage.  ‘He gets completely knackered, he puts a lot into it’ the band told me.  It was a full eighteen song set*, almost 90 minutes at a guess, so it’s understandable. He ain’t no spring chicken.

Robert deserves the success that King Rocker has brought him and whilst his onstage demeanour has never been shy and lacking in confidence, he really does have a new-found head-held-high swagger.  Well, as much a bruiser in a suit who whips out a kazoo and a slide-whistle every now and then and poses like King Kong can have a jagger swagger.

* Ace Of Hearts / Thicko Rides Again / The Top Shelf / Too Posh To Push / Lucky Dip / The Dishwater Kid / Bullet For Gove / Diary of a Bag of Nerves / Wicked Winter / (updated version of) Well Done Underdog / Gales Doc / Devil’s Due / (a brand new song!) Mark Meets No Mark /  Other Side / Real Gone Daddy / Dumb And Drummer /  Toasted On Both / The End Began Somewhere

The new lineup of The Glorias with former drummer Den now on lead vocals opened the nights proceedings.  It was good to hear them on a big stage instead of a pub backroom, their full-bodied Pistols ‘bollocks’ sound and stomp-a-long anthems filling the venue..

Just back from ‘Nam; (Cheltenham), was legendary anti-comedian Ted Chippington. Ted was inimitably Ted.  Confusing the hell out of everyone and dicing with potential death threats, ‘Any racists in tonight Portsmouth?’ ‘Oh good, not just me then’. An amateur heckler soon realised he was dealing with a pro and Ted relied on none of his ‘greatest hits’ with all new slug based material.

But the night belonged to the King Rockers and their drum Queen, the Nightingales. As a long-time follower of their zig-zag path, after lean years of sparsely attended shows, it really is heart-warming to see and hear them play at the height of their powers to larger, appreciative audiences.

And they really are one of the best bands in the country currently… watchable, weird, wired and rockin’. Forget all the comparisons that others and I have made in the past (The F@ll, B@@fh@art, V@lv@ts, H@wkwind…) the Nightingales sound like no other band on earth.

Rest of the November Tour dates