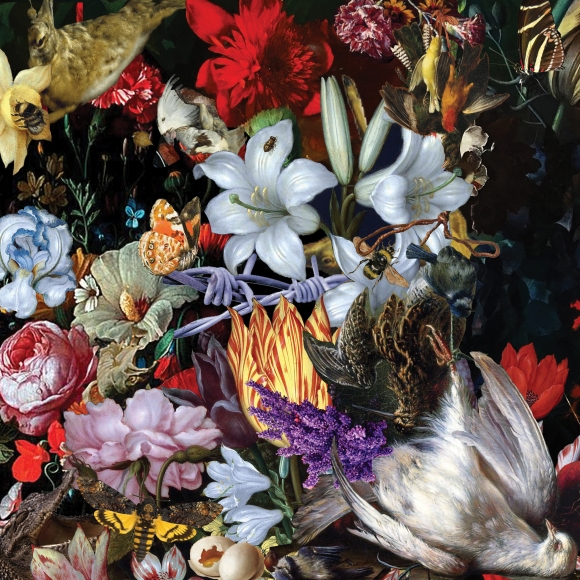 It’s unusual for a band to hit its peak after four decades. Yet here it is.  Says the PR bumf, but it is actually true, that the ‘Gales have done just that.

“He was my friend and I miss him” said Robert Lloyd to me once, when I asked him about Peel…

I like to think of the central concept of Will Self’s North London Book of The Dead to be real (you don’t actually die you just take on a new secret identity in another faraway borough and find a different job, maybe in the Civil Service…which is full of the Dead) and Peel is now a semi-retired chiropodist in South Yorkshire, where he always gets hugely excited about a new Nightingales album and has to lie down in a darkened room.  The forthcoming ‘Perish the Thought’ would have him doing cartwheels of joy once he got to hear it.

Real rockstars contrive an ‘image’ for themselves: the gunslinger, the outlaw, the rebel, the poet, the warrior… it involves dressing up: hats maybe or ostentatious hair. No names no pack-drill but you know the type? Gimme a C, gimme an L, gimme an A….

The Nightingales or rather their front-man, mainstay and last-standing original member – Robert Lloyd has always looked like a bored geography teacher.  One of those who is in the wrong job because he wasn’t good enough to join Ordnance Survey and be a cartographer.  (Fellow traveller and mate Vic Godard being more a Science teacher…and Martin Bramah teaches woodwork.)

There is a famous 1980’s music-paper cover photo where Robert favours the blue v-neck pullover and is sat at the breakfast table. His mum was pleased though, because her home-made jam took pride of place.   Nightingales sales plummeted whilst Bono wore a big hat & fringed jacket and his rocketed.

Even now, when Lloyd wears a suit, he still resembles a parsimonious teacher- forced to affect an air of professionalism by getting suited up to take the abuse from disinterested pupils.

The Nightingales wearing matching suits is probably based on the theory which the Godfathers Peter Coyne expounded some years back;  ‘If you dress like a pile of shit that’s how you get treated ( at hotels and venues) but wear a nice clean collared shirt and a whistle and you get better treatment’.  Or maybe they just want to look like the Troggs or the Animals.

The Nightingales’ ninth album, “Perish The Thought’ (review in a week or two) follows up their hit collaboration with Vic Godard, “Commercial Suicide Man”  (which I reviewed here….) and is released on  5th October 2018 – on Tiny Global Productions.  With initial copies comes a CD EP of unreleased rarities:

“Give It To Me” was a 1967 hit for The Troggs, one of the band’s most-admired combos. Recorded during the album sessions, The Nightingales’ cover was unlikely to make the album (too much good original material), and so it’s presented here for your amusement.

“B-Side At Best” was originally on the “Become Not Becoming” 10″ from 2017, but producer John Rivers took a shine to its punky energy and did a remix that somehow manages to be even more energetic and punk.

One of last year’s highlights for the band was a largely-improvised performance in Köln, Germany with Hans-Joachim Irmler of Faust. Jo, as he’s known, is also an owner at Faust Studio where “Perish The Thought” was recorded (and to which he add keyboards to the album’s closing track ‘It Is’.) One of the standout tracks from the show was a spooky and surreal version of ‘Real Gone Daddy’.

By whatever mysterious alchemy, the three songs ended up working together to make the perfect twelve-minute EP.  So rather than letting them languish in the archives, the band’s decided to press up a limited number of copies and offer them on a first-come, first-served basis to anyone ordering “Perish The Thought” from Bandcamp or buying it directly from the band at one of their 32 live shows this autumn. We fully expect to run out of this, so keep that in mind!

The Nightingales Rule OK.  The EP is fucking brilliant and the album is not their most immediate, but after a listen or ten you realise it is a work of unfathomable genius: Beefheartian and bizarre: rock’n’roll with a modern jazz unpredictability. Progressive, post-punk, peculiar and perky….

Don’t miss them on the tour – dates below.

All words by Ged Babey.    Nightingales artwork  by David Yates.