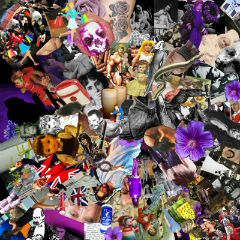 The Nightingales | Ted Chippington | Porky The Poet | Chin Of Britain

‘We play 21 songs for one hour that’s what we do’ explains Rob Lloyd after the show and it’s factually true they did play for one hour and it was 21 songs with no breaks and no pause for breath.

What he didn’t explain was just how damn good the Nightingales are these days as they headlined a night that should have been dusty with the dead weight of nostalgia but was fervent and alive from one end to the other.

As we enter the Borderline we catch the last song of Chin Of Britain‘s set and it’s one of those extended pieces built around a cyclical bassline and four chord riff sort of thing the Wedding Present did when they first burst onto the scene back in the Peelonian geological epoch. The song is damn catchy and the band sound great – need to check out the rest of their stuff.

Porky the Poet used to be one of those plastic bag carrying punky poets from the early eighties who were swimming in the wake of John Cooper Clarke – nowadays he his better known as Phill Jupitus- one of the nicest guys in the upper echelons of Brit showbiz. He is also pretty funny in real life and his set tonight, which he is doing for free in support of the ‘gales. He delivers a short set of acidic, acerbic poems and observations about his life in pop from nearly meeting the Clash, getting bottled of touring with Madness to actually meeting Paul McCartney and watching him do his mop top thing and other misadventures are perfectly delivered with great insights and humour.

The stage is set for Ted Chippington – the true genius of British alternative comedy – a comic who hates comedy and has been existing in the twilight zone of the underground for decades since we saw his third ever gig in a pub in Stafford way back in the early eighties. The joke then was that he was so dry and so lacking in any showbiz crap that he would be really funny – the sucker punch to that joke was that he was actually really funny and his influence on the true alternative scene has been immense with the likes of Stewart Lee regularity championing him.

Of course Ted doesn’t give a toss about this kind of stuff – the fact that he exists outside the showbiz world is what gives him his edge and also contributes to his fund of great shaggy dog stories that he delivers off the top of his head in that totally deadpan style. Ted doesn’t do boring stuff like punchlines or jokes or any of that crap- he’s naturally funny and his warmth fills the room but you HAVE TO GET IT and, as ever, the audience reaction is almost as entertaining as his patter. Some of the audience stand their dumb founded whist the girls behind the bar piss themselves laughing. In the long run everyone warms to Ted – he’s like everyone’s best mate and his anti comic patter is pant pissing hilarious.

Ted is still the funniest comic on the circuit. After the gig I ask him why he’s never on the TV and he smiles at the very thought- but if the slick patter and well worn routines of the current crop of comics is all we have then we demand even more loudly the genius of Ted to be planted into the heart of the national consciousness. This is a man who can make a ten minute talk about a 21p tin of meat funny and make the forgotten end of a long everyday tale hilarious.

The Nightingales enter the stage with little fuss and then deliver the finest set I’ve seen them play in several decades of gigs. Tonight they are focussed and sober which is a good job as their complex music seems to have leapt several levels into an almost prog territory but never collapsing into self indigence.

Andreas Schmid from Faust is stunning on the bass, with a neat, clipped, twanging four string playing a zig zagging run of riffs that never ever get lazy and lock into the poly rhythms of excellent drummer Fliss Kitson. This is some rhythm section and one that guitarist and former Prefect Alan Apperley scratch and scrape his frantic riffing across.

There is a lot of energy and intelligence in their sound and a manic rush of ideas scurrying around in the songs. Of course the Nightingales have always dealt in this devilish stuff, it’s just that somehow they seem to do it even better these days.

Frontman Rob Lloyd now has the supreme platform for his caustic and witty word play, singing songs from the outsider looking in at the madness of the world. It’s the small things in life exaggerated and analysed in his word flow that make the songs so fascinating and with his voice now more of a croon than a bark the band sound oddly commercial in a warped way in all their intense, scurrying madness.

Tonight has been a triumph for a band who have often faced adversity. The set bodes well for the new self released and drolly entitled For Fucks Sake album and is yet another V sign to the music industry that has shunned them for far too long.

They may be endlessly bagged under difficult music and Rob Lloyd can be an awkward sod but there is so much joy to their music and so many hooks crammed into the freewheeling avalanche of music that they are well well worth wallowing in.