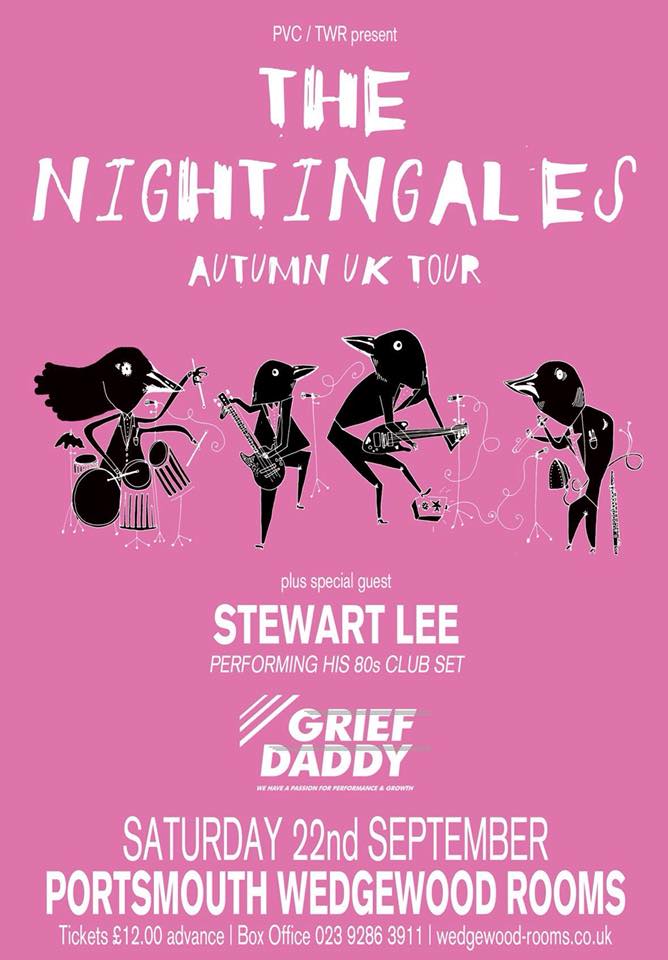 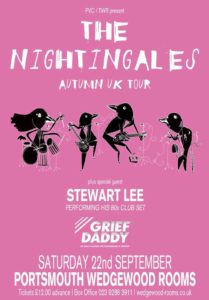 Force 10 Gales blew into Pompey, Stewart Lee has grown a white beard and the IT Crowd form a band and Ged Babey’s last train gets cancelled.  Extraordinary gig though he says.

Are the Nightingales a comedy band?   I overheard a young woman say in the smokers pen -after Stewart Lee’s short, sharp set -during which he humiliated a photographer and took-down a heckler -and revisited the ‘If the Answer is Jesus, what is the Question?’  sketch from the 1980’s.  He is a fucking genius but hides behind a barbed persona up-close and failed to blend into the crowd when wanting to watch the bands from out-front.

The Nightingales are a funny band, I was gonna say – but more funny peculiar than funny ha-ha.

Grief Daddy are on a high in their home-town, Battle of the Band winners and a bizarre conceptual band.  They dress like IT geeks: shirts, ties and slacks, and use analogue synths and gadgetry to make Nerdy Sleaford Mods meets Human League piss-take pro-test muzak.  That sounds naff, but they have some catchy tunes and whip up the home-crowd of mates and fans into something approaching a mild-mannered frenzy.  The frontman has the Jarvis Cocker as Open University lecturer from 1972 look and manner and they incorporate the Normal and Add N to X influences musically with cartoon sci-fi and public information film visuals behind them.   They have the potential for Devo-like cult stardom if the band is more than a conceptual art-prank.

Why exactly Stewart Lee agreed to tour small venues with the Nightingales is a bit of a mystery, but he has been a long time fan and it certainly helped ticket sales. For many of the people there-to-see-Stu, the Nightingales high-volume, drum-heavy, song-after-song barrage of weird-time-sigs and surrealist beat-poetry was perhaps a bit of a shock.  The crowd did thin out- but those who remained were captivated and witnessed a band on the form of their lives. A band quite unlike any other.

The front row at Nightingales gigs always includes a couple of drummers, marvelling at the skill and unique style of Fliss Kitson -whose vocals are increasingly a major part of the ‘Gales magic formula.

A distinctly sober Robert Lloyd was on good bum-wiggling form and in ferocious voice and at times seems to stand aside and marvel at what a great band he has backing him.  Jim Smith has really come into his own on the new Perish the Thought album.  Inventive, clamourous, jagged-but-smooth guitar-playing which can turn on a sixpence when the need arises.  Andreas is a monumentally great bass-player too given he has to anchor the bottom end of a combined sound which takes in Beefheart, Velvets, jazz, prog and rock’n’roll.

This was the slickest show I’ve ever seen the Nightingales play, and the loudest and to the biggest audience.  Most of Perish the Thought the baffling new album was aired, and it all somehow made perfect sense finally.  Dumb and Drummer and Company Man were as-near-as-they get to crowd-pleasing singalong favourites and were magnificent.   A lot of people new to the band seemed won-over , whilst a few had a baffled and shell-shocked look on their face at the end.  Just how it should be. 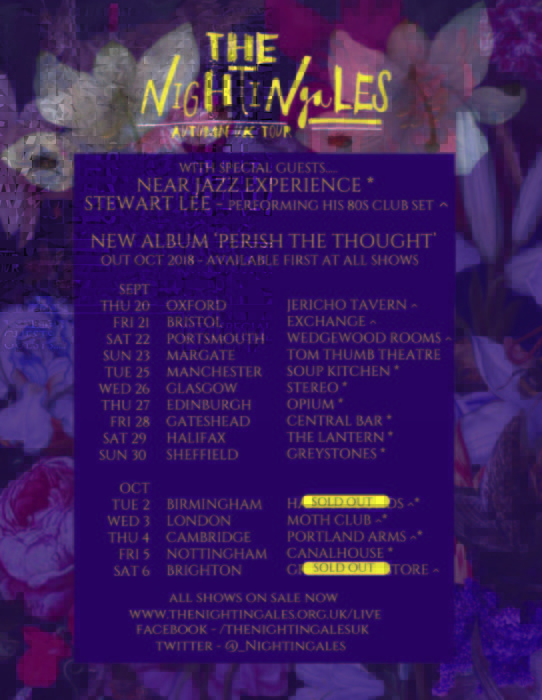 Thanks to the two Southampton chaps (whose names I forget…) who got me home. Get in touch.