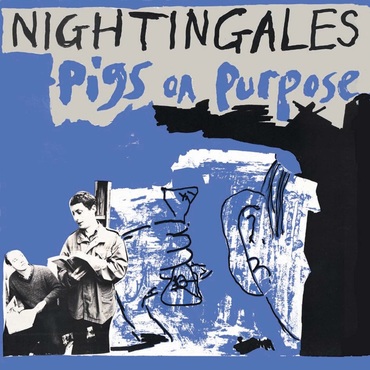 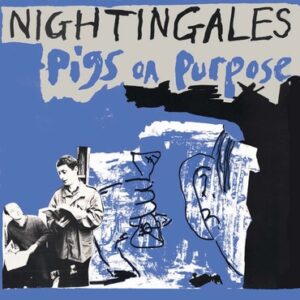 The Nightingales – Pigs On Purpose  (Call Of The Void)

Ripe for rediscovery, the debut album from seminal Birmingham post punks. Newly expanded, remastered by Stuart Moxham with the addition of early demos and non-album singles from the period. The album which you never see listed in ‘Best Post Punk Albums Ever’ lists* which should be there by rights, says Ged Babey.

Peel and the wiser of the old-school music press always knew Lloyd was some kind of genius and maybe, just maybe the world and his wife (who watch Sky Arts) have finally caught up.

As long as money talks you can’t buy the truth

Pigs On Purpose was his and the Nightingales first full length album. Previous band the Prefects recorded only a Peel session and few live tracks, now compiled on the Amateur Wankers and Going Thru the Motions albums.

For longtime fans, the most interesting bits of this reissue are the demos: recorded between the dissolution of the Prefects and proper formation of Nightingales.

Bristol Road Leads To Dachau is a wonderful combination of Palm Olive style drumming and Warsaw type guitar scree on a song about the 1974 IRA Birmingham Pub bombings which recounts the shock it sent through the community. It remains one of punks most real accounts of everyday horror.

Hark My Love doesn’t sound unlike the Pop Group or the template for most of the Ron Johnson label bands.

Nowhere To Return is an absolute gem -a Prefects/Subway Sect style smart-punk classic where a band come into their own and justify their existence in less than 3 minutes.

The Blisters demo shows how they went up a gear when recording the actual album, but demo versions of The Crunch and The Hedonists Sigh are actually sharper and looser and better than the finished album versions.

Single tracks like Under the Lash and the peerless Idiot Strength sound magnificent but others; Paraffin Brain and Elvis the Last Ten Days still sound irritating and scratchy.

A broken home and a one-night-stand, you’re just as strong as your weakest link.

The four live tracks are OK but not a revelation and verge on the out-of-tunelessness which detractors hone in on when dismissing the band.  Talking of which….

In the new liner notes Rob Lloyd tells the tale about the time Paul Weller showed up in the Cherry Red offices, picked up a Nightingales 7″, stared at the sleeve a few moments, pointed to it and stated, “THIS . . . THIS is everything I hate about independent music!”

This speaks volumes somehow. About the business-like, ambitious Weller and his London-centric conformity and the ‘Gales provincial obtuseness and stubborn artistic independence and freedom to do what they wanted without commercial constraints.

… he spat on company cars.

The original Pigs On Purpose album sounds just as wayward and difficult as ever.  To the uninitiated it is the half-way point between early Joy Division and Dragnet era Fail perhaps – but so much more than that.

Well, did you hear about the Irishman who opened a Tandoori restaurant?

In the early 80’s the expected reply would be a punchline highlighting the stupidity of ‘a thick paddy’.

He did quite well for himself. It was quite a lucrative line of business.

Is the line that follows, confounding expectations and laughing at the prejudiced assumption that the underdog would be kicked. The Nightingales always fucked with your preconceptions.

The percussive tea-tray crashes in Don’t Blink are still a joy to hear.

The socio-political analysis of the Crunch is still mind-bending and astute, even if the music does invent the sound of the Wedding Present.

The bass-playing and drumming on Start From Scratch are wonderful – and inspired by the Slits Tessa and Palm Olive on the two classic Peel sessions.

I live in Birmingham, where the council have passed  a new resolution. That from now on they will plant thinner trees, so muggers they can’t hide behind them.

Nightingales shine, as ever, a spotlight on the surreal ridiculousness of everyday life in the UK. And make music to celebrate our own part in it. Music to soundtrack the bar, the bookies and the curry house and the glorious stupidity and wonder and joy of it all.

No matter what anyone else will tell you, Pigs On Purpose is in the Top Ten Best Post-Punk albums ever made.

Dismissed as tuneless outsider Brummy also-rans, Nightingales were, and still are, arguably the cleverest, funniest and truest of all their contemporaries.

Ten Bob Each Way / Use Your Loaf BRAND NEW 7inch SINGLE by The Nightingales & Stewart Lee – Out NOW!