Home Film The Night of the Generals – film review 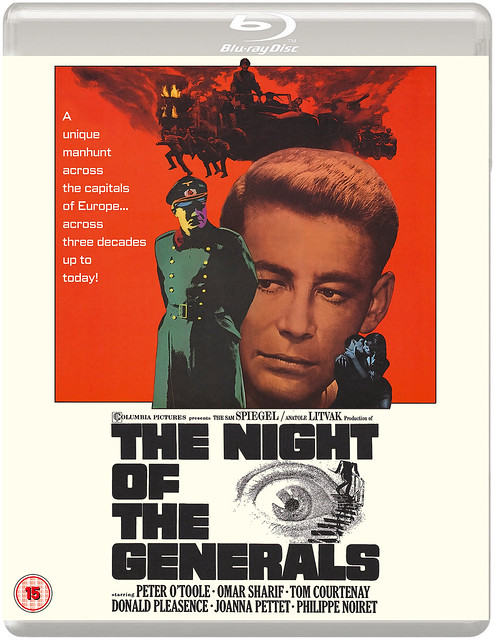 Based on Hans Hellmut Kirst’s 1962 novel of the same name, The Night of the Generals was produced by Sam Spiegel and reunited two stars of a previous Spiegel movie Lawrence of Arabia. The gut instinct of both Peter O’Toole and Omar Sharif was to turn down the chance to become involved, but Spiegel proved persuasive.

A woman has been sadistically murdered in an overcrowded tenement flat in German-occupied Warsaw.

As she was also a German secret agent, the Nazis send in an investigator, Major Grau (Omar Sharif). He’s told by one local that, although he didn’t see the killer’s face, he did recognise the grey trousers with the long red stripes down the sides worn by German generals.

Grau quickly becomes obsessed with bringing the culprit to justice.

The evidence he gathers points to the killer being one of three men: General von Herbert Seidlitz-Gabler, played by Charles Gray (Diamonds Are Forever & The Rocky Horror Picture Show); General Klaus Kahlenberge, his chief of staff, played by Donald Pleasence (Halloween & Phenomena); and finally, General Wilhelm Tanz, played with an icy intensity by Peter O’Toole.

Tanz is a ‘perfect maniac’, whose atrocious actions disgust even some of his Nazi colleagues. Grau soon watches him instruct soldiers under his command to set their flame-throwers on rows of buildings in the Warsaw Ghetto, obliterating them in an instant in order to flush out a few Polish Resistance fighters.

‘I don’t think he’s the man I’m looking for,’ the dogged Grau later admits during his investigation. ‘Anyone who has the power to destroy a city whenever he chooses, does not need such a minor sport as killing a girl?’ As he later admits though, he could be wrong.

The crime remains unsolved, partly due to the fact that Grau finds himself conveniently transferred to Paris. In that city, a few years later, a brutal murderer is at large with the same mode of operating strikes.

A huge international co-production, The Night of the Generals is strange in that it eschews the kind of combat scenes that had become a staple in war dramas of the time, although director Anatole Litvak does inject plenty of tension into the story.

The film has an intriguing premise but also has a number of faults. There’s some sloppy dubbing and some fast-forwards that are confusing. The epilogue set in 1965 contributed little and the ageing of the characters in this sequence is mostly unconvincing. One plot strand could have been cut, too.

Sharif is miscast as Grau. He’s just too one-dimensional and lacks any character arc. It’s also downright strange that such an über-Nazi as Tanz would not have queried his far-from-Aryan looks, when questioned by him.

O’Toole is better and truly mesmerizing at times such as when he visits a gallery and comes across the kind of paintings that the Nazis labelled ‘decadent art’. Glazed-eyed, he scrutinizes a Van Gogh self-portrait, painted while he was resident ‘in an insane asylum’, and is sent into a trance-like state. It’s never explained exactly why. Presumably, he recognises an inner torment on display that corresponds to something within his own personality.

Some believe O’Toole’s performance veers towards the cartoonish, but I found it the best thing about The Night of the Generals. I couldn’t take my eyes off him every time he took centre-stage as a man who is unafraid of taking on the Russian Army on the battle-front but so scared of germs that he has to constantly wear gloves.

Afterwards O’Toole accused Spegiel of interfering with the script and demanding rewrites on a near daily basis. He’s also claimed that the producer was guilty of telling Litvak how to direct and he would never act again in any of his movies.

It is an entertaining enough watch but maybe O’Toole’s gut instinct about the film was probably right.

Extras include a new audio commentary by author Scott Harrison and a limited edition collector’s booklet featuring new writing by him.

For more on the film, visit Eureka Classics here.