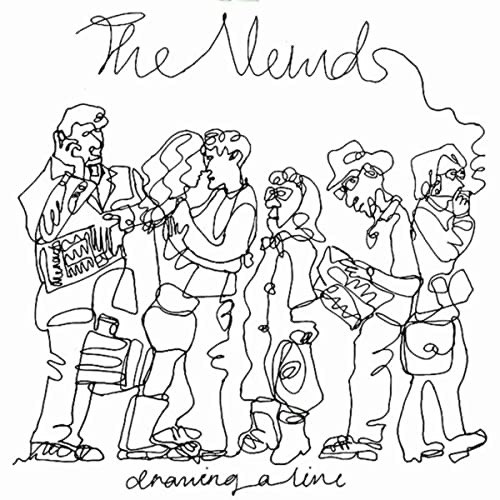 The Newds – Drawing A Line 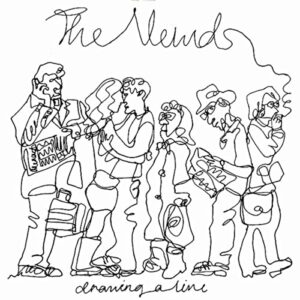 New download only album by the Bolton based six piece, with 13 tracks drawing on a diverse range of influences….LTW’s Ian Canty brings you all up to date with today’s Newds…..

First some history for the uninitiated. The Newds were formed back in 1999 by singer Paul Meagher and guitarist Dean Woods at art school, following a long line of popular music acts that found their genesis while studying at just such an establishment from the Beatles onwards. Though the personnel has fluctuated over the years, these two mainstays still lead the line. They are currently joined by a rhythm section of drummer Daniel Garthwright and Kieran Schofield on bass, with the keyboards of Tony Sabanskis and Paul Crompton on vocals and guitar bringing them up to a sextet. Though a long running outfit, this appears to be their debut album proper, though a collection of their early work called First Strike has also been made available in the past. They initially came to my attention via their smart contributions to The First Wave compilation on the mighty Big Stir imprint, which were Through The Dark Side and the title track of this LP.

Describing themselves as cutting along through all points alternative pop, power pop, rock and roll, punk and folk and thus taking in a wide range of influences, one didn’t know quite what to expect from the Newds and Drawling The Line the album. Well the conclusion that I’ve reached is that it is very much a “proper” LP that hangs together well and ebbs and flows at its own pace. Here the Newds sound more like modern psychedelic pop than anything else to me, with touches akin but not exactly like greats of the form Syd Barrett and Julian Cope here and there. But we don’t need to overly concern ourselves with genres – on the evidence provided here the Newds are capable of great pop music, it really is as simple as that.

Drawing The Line opens up with the strident and punchy rocker Freebasing Your Love, not the first time drug addiction and fatal attraction have been ever linked lyrically, but this is an upbeat fizzer with some finely judged and lovely country-flecked guitar. The acoustic and folk-flavoured (right down to the Dylan-esque harp break) Intolerance Of Uncertainty follows, twisting and turning hypnotically and not without a self-mocking wit either. Cruel Cold Kiss recalled for me Squeeze circa Sweets For A Stranger and the next track Death Doesn’t Suit marries the frustration of the lyric to a nicely evocative acid folk/psych tune.

The next brace of Fluoxetine Dreams and Anti, carefully positioned in the middle of Drawing The Line, form real the heart of the album. Two lengthy efforts which drew this listener inwards, the former deals with the necessary but false boost to self-esteem that anti-depressants give and the latter seems like a sequel, at least musically. The Newds provide the perfect stoned pop psych landscape for these two, a spacey, unreal atmosphere which is also quite stunning. The keyboard work here I really dug and if pressed I would say Fluoxetine Dreams is the LP’s highlight, great stuff indeed. Though psychedelic, this is a thoroughly modern, original 21st century version.

After the intensity of the above the funk rock of Do Or Die feels like a necessary pause for breath, a dance beat for instant relief. Next Join The Circus follows as an ace piece of toytown pop, but Through The Darkside has some unexpected electric handclaps which renders it an odd electro/wistful 60s pop crossbreed. Coastline again made me think of Squeeze in their high quality, flowing and personable pop mode and the slow and catchy Hope Comes Calling works as a classy piece of modern pop/rock.

The title track shows the Newds are no slouches when it comes to faster paced beat music, another addictive number with the great line “No future sitting at home on your computer” that has particular relevance in the current climate. Soul Pony provides Drawing The Line with the ideal comedown tune to go out on, the bass bouncing nicely and the percussion measured and very cool indeed.

Though it may have taken the Newds a very long time to come up with a long player of their own that isn’t a comp of older material, Drawing The Line reveals that it was well worth the wait. A mature, intelligent listen, but also fun, satisfying and rewarding. Let us hope it doesn’t take them another 21 years to follow it up!