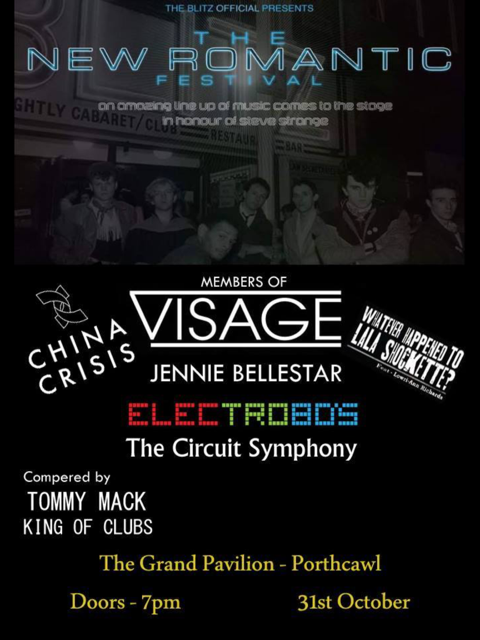 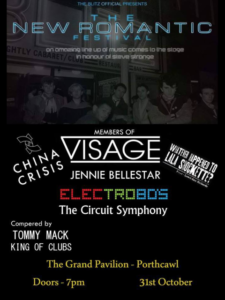 Back in February the world lost the core of the New Romantics generation, Mr Steve Strange, he was a much loved son, brother, uncle, friend, and music icon. He was that much loved that family and friends of his got together with musicians and artists (who had worked with Steve or knew him really well), and planned an extravaganza of music and performances based around the ’80s era.

The extravaganza was aptly named “The New Romantic Festival” and was organised by his very good friends Amanda Lloyd and Jayce Lewis, and with help from Kim Smith and his many other friends and of course not to forget his lovely family. The purpose of this festival was to honour this great man, fund a headstone in memory of Steve, but also to bring together the many people that loved Steve, people that didn’t know him but loved his music, along with good friends and family that knew him really well!

It was decided that the “New Romantic Festival” would take place on 31 October 2015, and was actually announced without a line up, however when the tickets went on sale in May they completely sold out! A lot of preparation and organisation went into this festival, in such a short space of time, and when the acts were announced fans became excited. I thought personally it would take a hell of a lot of commitment and work to get this to happen, but knowing Kim Smith’s involvement I knew that everyone would pull together and work tirelessly to make this a huge success.

Arriving in Porthcawl, a “chocolate-box” seaside town, you are welcomed with open arms into a warm and extremely friendly community of people, who all of course have their own story about “Steve”, and it’s easy to see why Steve would feel so at home here.

The venue to hold the festival was at the aptly named “Grand Pavilion” in Porthcawl, right on the seafront, and it has a magnificent dome with a beautiful” art-deco” look about it inside. Fans queuing outside were all excited and a lot were dressed in 80s or “New Romantics” style, which you would totally expect. These fans had travelled in from all over the UK and some from overseas, for this festival, so everyone was buzzing.

Tommy Mack, personal friend to Steve, was the compere for the night. He certainly knows how to warm up the crowd, with his funny antics, but most poignantly he read out the wonderful poem that Boy George wrote for Steve, that was read out at Steve Strange’s funeral, which was simply beautiful!

First on the stage was The Circuit Symphony, who are Oliver Davis & Sam Adams, a talented pair, who provide a wonderful electro-synth sound of ’80s style music, playing tracks from their new album Oracle. It was hard to believe that these two have only performed a handful of gigs previously, as they were simply amazing!

Lowri-Ann Richards, a great friend to Steve, then was introduced, with her alter-ego “LaLa Shockette”. This is a mash up cabaret of wonderful songs from artists such as David Bowie, Kate Bush, Gary Numan and Marc Almond, all stunningly sung by Lowri-Ann aka”LaLa Shockette”, with a backdrop of original photos and live footage taken of “LaLaShockette” with said artists.

The show tells the story of LaLa Shockette’s rise to fame emerging as a Blitz Kid with the New Romantics, forming the band “Shock”, her flings with various rock stars, and performing on Top of the Pops with Visage, Gary Numan, Duran Duran & Spandau Ballet.

This lady totally locks eyes with the crowd, and draws in everyone with her professionalism and comedy style performance on stage. Love also the wonderful costumes and fashion collection that Lowri-Ann rapidly changes into. Definitely would recommend this to ’80s music lovers, and anyone else that loves good comedy for more details of forthcoming shows check out her website.

Now I had heard that the next act were amazing, Electro 80s these performed last year regularly with Steve Strange, when he was on the road with Visage, and became good friends. Electro 80s are an a Electronica tribute band who perform a big mix of hits from the ’80s, but they are not just a tribute band (some of these bands can sound as if you are in a karaoke bar and Electro 80s certainly don’t) , they perform their songs with such professionalism and fun. They cover a big mix of all the artists and bands who had big hits in the ’80s such as Spandau Ballet, Duran Duran, Orchestral Manoeuvres in the Dark, Soft Cell to name but a few.

They had everyone on their feet in the Grand Pavilion, and together with Man O Chrome (who is a fantastic Electrobot) they put on an a amazing show of electronic music, which had the crowd shouting for more!!!! Electro 80s have 3 main members of their act, and they are Blue who is the lead vox and frontman, Green who is also vox, guitarists and keyboard player, and then Red who is the main keyboard player and backing vox. Man O Chrome often performs with Electro 80s and together they make a wonderful team, with his robotic dancing he had eveyone mesmerised with his fabulous moves, he must have been so hot in his costume but this did not deter him in anyway. These two acts perform currently mainly in the North of the UK see Electro 80s for details.  Check out here for more information about Man O Chrome.

We were then met with a ball of energy, fun and motivation with Jennie Bellestar (Jennie Matthias), she spoke in depth about Steve Strange, as she was a very good friend to him, and then kicked her shoes off and launched into a medley of The Belle Stars songs. She had everyone singing and joining in fully interacting with the crowd mainly with “The Sign Of The Times” and “The Clapping Song”, and totally took us all back in time to the 80’s. Check out the footage below for more of her performance. For more information about her current music follow her on Twitter.

China Crisis then came on stage with a big cheer from the crowd, breaking into a variety of their music, including lots of new music but also lots of the older stuff that most of the audience would remember such as “Wishful Thinking”, “Black Man Ray” and one of their very first song “African & White”. They were well received and Eddie Lundon always playing so professionally he totally gets into it and makes it look so easy, (that you want to pick up a guitar there and then and play alongside him) he compliments Gary Daly’s vocals so well, and Gary has an incredible voice, still sounding as good today as they did back at the pinnacle of their music career.

Again another band totally engaging with the audience and the crowd singing along… They ended their time on the stage with the closest they became to the New Romantic scene with the classic “Christian”. You can still catch them this year in the UK they have a few more dates before heading over to America… check here for tickets.

The headline of the night then came on Visage (members of Visage). So you may wonder how can the band perform without their main man Steve Strange, and it was obviously visibly hard, emotionally for them all, but the members are formed now of Steven Jones (vox), Lloyd Daniels (vox), Robin Simon (guitar), Lauren Duvall (vox), Logan Sky (synth/keyboard).

They were also joined by Electro 80s and Man O Chrome and all together put on a stunning set, there wasn’t a dry eye in the house! There were lots of fantastic tracks sang including Damned Don’t Cry, Mind of A Toy, The Anvil, along with tracks taken from Hearts & Knives and also the new studio album “Demons & Diamonds”, featuring the songs that Steve Strange was preparing prior to his untimely passing in February 2015. The new album will be released on November 6, and the cover has been designed by “Boy George”.

The biggest song of the night was “Fade To Grey” and as I said before there was lots of tears, from the fans, Steve’s friends and most importantly Steve’s wonderful family including his mother Gillian and sister Tanya. One thing is for sure all of these people coming together for this grand occasion Steve Strange’s music and memory will live on and on!

For details of the new Visage album visit https://www.visage.cc/

Also for anyone that couldn’t get to this wonderful event there will be another big event at Pyramid Parr Hall, Warrington in January to help raise money for the statue for Steve Strange www.pyramidparrhall.com/whats-on/event/the-steve-strange-memorial-post-christmas-party/

For more information about the Steve Strange statue or to donate visit https://crowdfunding.justgiving.com/stevestrangestatue

All words by Helena Hughes.