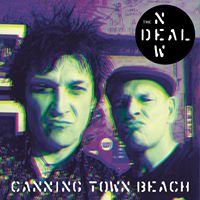 Since The Cockney Rejects reformed early on in the 21st century they have re-established their niche as one of the most powerful and thrilling live acts around and have, in addition, recorded three very good and well received albums (including 2012’s East End Babylon). Not being ones to rest on their considerable laurels, both of the Geggus brothers have busied themselves with other projects. Guitarist Micky formed the Crunch with Diamond Dogs’ Sören “Sulo” Karlsson, Terry Chimes of the Clash and Sham’s Dave Tregunna and have to date recorded two LPs. Younger brother Jeff, for his part, has performed with the Outfit, pushing at the boundaries between Rock, Rap and Indie and now he’s also joined up with Sulo Karlsson in another project called the New Deal.

The first fruits on this union is a real peach of a single entitled Canning Town Beach (only available on download at present, but the band are looking at bringing out a vinyl version soon). There is a little of the Kinks’ Dead End Street in there and certainly something of the Faces too – though more with Ronnie Laine at the helm than Rod. Yes this is a step away from the Rejects’ primal power, but the heartfelt emotion and honesty is still shining brightly. This song rallies against the gentrification that runs rampant, but also warmly remembering better, simpler days with a smile.

This is a lovely, evocative singalong, in fact a little like something the great Roy Wood might have cooked up in one of his more reflective moments in the later days of the Move (now that is a big compliment). A great record for those lazy summer days we’ve got ahead of us now and very promising signs for what the New Deal have in store for the future.