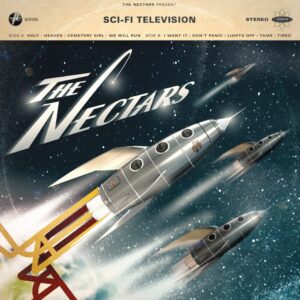 Since their formation in 2016, the four-piece American indie/punk rock band The Nectars have flourished, with their two previously released singles Heaven and I Want It being simply a taster of what is yet to come on their upcoming and extremely passionate new album Sci-Fi Television.

We Will Run is filled with so much young energy that we all experience in our adolescence. That idea of running towards the sunset and chasing the things we all dream of achieving. The whole album is based around self-reflection and discovery of one’s self as a young person and never wanting to let go of what being young feels like. The band’s creative outlook towards music and love and their expression of rebellion is what makes Sci-Fi Television a truly invigorating  listen.

My personal favourite track on Sci-Fi Television is Cemetery Girl. Starting from the title itself as a topic of discussion, this track reminds me of a 90’s style feel good punk anthem, with perfect vocals from front woman, Jessica Kenny. Tame is extremely empowering in terms of the female lead belting out notes demanding to be heard. A woman in this modern day letting the world know she has the power and will get what she wants is breath-taking and a revolutionary step that many women are taking through their lyricism at this time. I think it’s a wonderful theme for this young band to focus on. The Nectars indulge themselves in a punk sound in the track Holy, that will be a fan favourite if you are a lover of the drum heavy and quick tempo beats, laid down by Mike Montalbano. Alternatively, if you love listening to guitar-based tracks your favourite from the album may well be Don’t Panic, where the talented Michael Baron shows off his skills.

The realistic nature of Lights Off is absolutely refreshing, referencing cocaine and how people do some things they may not want to, to ‘feel validated’. But at what cost? It is worth nothing if you aren’t being your true self which is a hard but necessary lesson to learn. The last track on the album, Tired starts off with bassist Jon Paul singing in a very cool and casual tone which is a great anticipative start to a track which talks about not wanting to stop moving. The passing of judgement on others to find the fun that you really want to experience, to me sounds like the perfect mindset in making yourself happy in this modern world of social media and peer judgement. Personally, listening to this track inspired me and made me think.

All things considered, I love Sci-Fi Television. I think the relatable and feel good nature is something a lot of people look for when wanting to discover new artists or bands to listen to or add to their Spotify playlists. Through their album release and headline show at The Monarch I know they will gain a lot of popularity in the UK because of their infectious energy in their performances as well as their passion for the music. This is that which will make people respect and follow them throughout what looks like a very promising career.

Watch the video for The Nectars I Want It here:

If you would like to experience The Nectars yourself their live dates are below:

You can read more from Sophia by checking out her authors archive here.