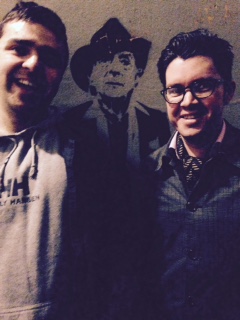 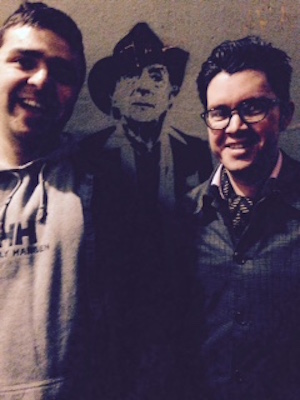 After ghost writing the much lauded autobiography – Renegade: The life and times of Mark E. Smith, this set of short stories establishes Collings as a promising new voice in fiction according to Nathan Mcllroy.

The Myth of Brilliant Summers is an engrossing collection of kitchen sink vignettes and fractured memoirs from the stout-soaked mind of Austin Collings.

Born in 1980 and raised in Radcliffe, Collings is from a generation that grew up on the cusp of the digital age; a now distant era where you could travel through childhood without the personal tracking of GPS and parental chauffeurs overshadowing your every move. This sense of freedom is evident as he regales the reader with coming of age parables that evoke feelings of youthful discovery. And yet, far from being safe sanctuary, Collings’ world is one of seedy satellite towns forever orbiting the false glamour of the city.

Collings manages to encapsulate the sapped spirit of decimated communities, capturing the inhabitants as they shadow box off the page, raging against the tedium of stillborn dreams. Whereas traditional narratives might spell out their moral stance, Collings implores you to join the dots using simple prose loaded with psychological triggers.

“A lot of writers are taught too much about rational connections when you’ll find in fact we live a very irrational life don’t we? A lot are taught that a story must be logically connected in certain ways but incidents arrive generally from illogical behaviour…a lot of these moments stem from irrationality.”

Attempting to disprove this rationale, we conduct the interview in the early afternoon to avoid getting hammered but succeed in drinking twice as long. I start by asking how this book was published and it transpires that he was initially courted by a top literary agent working for AM Heath:

“He took me down to this meeting in London and I fell into the trap. I should have done what Kingsley Amis used to do and order the most expensive bottles of wine and get fucking leathered. That’s what you should do because they’ve got a bottomless pit these people. He said I’ve read David Foster Wallace and such a body. I thought brilliant, he’s quite young and he’s into all this but in the end, he wanted me to write stories of people I knew in an unrealistic way. I just went-fuck this.”

So, instead of kowtowing to the demands of a well-established company, and crucially, a steady employer, Collings took his chances with some new publishers on the block.

Pariah Press was established last year by Jonny Walsh and Jamie Lee. Jonny is a stalwart of the Manchester Underbelly, most recently championing the contemporary musicians hitherto frozen by the long shadow of Manchester’s musical past. Jamie Lee is the frontman of Money, a band whose literary leanings have seen them garner rave reviews and a growing fan base across Europe.

“Thankfully Jamie sent me a message and that’s how it all started really. I liked him the first time I met him. He had a good look in his eye and it helped that he gave me free beer tokens.”

Pariah Press are very much a DIY affair but one that puts the onus on creativity instead of profit–a business credence that is disappearing faster than Arts Council funding. Throughout the last decade, there has been a dilution of working class opinion in music, film, TV, art and politics. The cultural landscape has been monopolised with few exceptions, resulting in a growing demand for voices that chime with the nation and not Rupert Murdoch’s payroll. Unfortunately, there are many tireless voices being drowned out through the usual channel’s which makes publishers such as Pariah all the more vital.

“I’ve had meetings with TV companies about things and they wouldn’t touch my writing. The BBC when it was at its best was supporting people like Alan Clarke, Dennis Potter and interesting talent. In the 80s when you had all these oppositional viewpoints in the media, you’d have Boys from the Blackstuff, you’d have Brookside…”

“Any good writer or artist is generally in opposition to what’s around them. Not everything but most things and I think that’s what gives them the edge and the permanence for (their work) to hopefully become timeless.”

One passage that might have sent middle men into a panic is The New Grunts, a story describing the author’s frustration upon seeing the armed forces recruiting at his local shopping precinct, coupled with jealous pangs of outrage when he spots a bestselling book on the Falklands war in a shop window (Waterstones have recently announced that Myth’s will be its new book of the month receiving front window treatment at every store in the country). In an age where to disagree with the actions of Our Boys is tantamount to treason I was curious as to what Collings thought of the increase in flag waving in a post 9/11 world.

For a moment I think Collings might be stuck for words, censored, in part by the Help for Heroes décor of the pub;

“Anybody who was a squaddie at my school was thick and violent.”

A patriot groans from behind the bar and then proceeds to stab a white feather pillow to death.

“I can’t abide all this Help for Heroes shit. The records are shit and they’re not heroes. It is just propaganda.”

“Certainly, with this centenary; that Sainsbury’s advert and the way the BBC have been laying it on really thick recently with Armistice Day-I think it’s very well-rehearsed emotions that they employ. A lot of people have a lack of historical perspective don’t they? Why’s it so cyclic? Why are they so ready to re-engage? There’s something inherent at the root of British society…”

“The only thing I am at war with is the obvious. If there is a thread of military warfare throughout the book it’s with obvious publishing, obvious media. I think we have to be to a certain extent.”

It’s refreshing to hear a writer talk with the same passions they employ on the page. In the flesh, Collings’ reinforces convictions that are splayed throughout his book, with specific ire reserved for the political figures of his upbringing.

“I’m quite interested in how Margaret Thatcher was a philistine. Anthony Burgess wrote a good piece about this. He thought her main fault was her installing this philistine work ethic-work a lot but don’t really think very much. Now we have educated philistine’s which is very dangerous because all they can do is repeat bad history. They can’t bend circumstance. They’re unwilling to. They’re inflexible.”

“You’ve heard that story about when she was a kid? Her dad used to own that shop and she used to spit at other kids walking past at the corner…which is a great metaphor for what she became.”

Collings has no sympathy for anyone who revels in ignorance regardless of their ideals. Stories like George and Dragon, Uncle Frank (Jackpot), and Home Brew depict the lackadaisical attitude towards everyday violence and small mindedness that can plague insular communities. Home Brew especially, sums up his neighbours nonchalance towards the intimidation that afflicted his family when he was younger;

“It was a very strange street-everyone hated us. They thought my middle brother was gay because he used to go to the library! One day, these things were being sent to our house; funeral leaflets, pizzas, fire engines. We knew who it was. My older brother came home from work and he raced out straight over the road to this fella. He just feigned a left then boom-he went right down. It was one of the greatest moments of my life. The whole street was almost awestruck because you knew that they were watching behind the curtains.”

Childhood events such as these etch themselves in your memory and shape your world view but not all prominent memories are as dramatic. The book is full of poetic cornerstones that are as nuanced as the writing; from job club meetings (All the Sad Young Men of All Ages) to teen angst fantasies (Because We Are Also What We Remember) they will resonate with many because and despite of shared experience. The chapters are often a few pages long or less, a neat trick perfected by John Fante to ensure readers wind up tearing through a book in a few sittings but Fante’s influence is more than just decoration and such conciseness demands discipline.

“There are these spiritual qualities (with writing) that people rarely talk about-like concentration. If you get to a level of focus you can do quite a lot of things. I don’t think people would be pressured into a lot of things that they are through oppressive governments and workforces–that’s why the essence of the unions was built upon argument and conversation.”

Although at times stoically detached, his writing is matched with a deft sensitivity and the short story format suits these recollections well. Upon reading the book I was struck by its similarities to Charles Bukowski’s Notes from a Dirty Old Man and James Joyce’s Dubliners; two vastly different sets of short stories stylistically but ones in which fact and fiction blur until your focus is realigned. Like his predecessors, Collings shines a light on the minutiae of everyday existence and asks the reader what they perceive to be important and why? Curious, I ask how he feels the book will be perceived amongst the wider public;

“People could take this as being quite depressing. I read sort of fairly what you could call dark books-the pleasure I get is in the quality. Is it convincing? Can you be convinced? I’m not into being patronised or misled.”

Out of nowhere, the barman calls last orders and it’s our turn to groan.

“It’s not a misery memoir though…”

The Myth of Brilliant Summers is available to order from the Pariah Press website: pariahpress.com/product/themythofbrilliantsummers and will be available to buy in what’s left of the high street in the New Year.