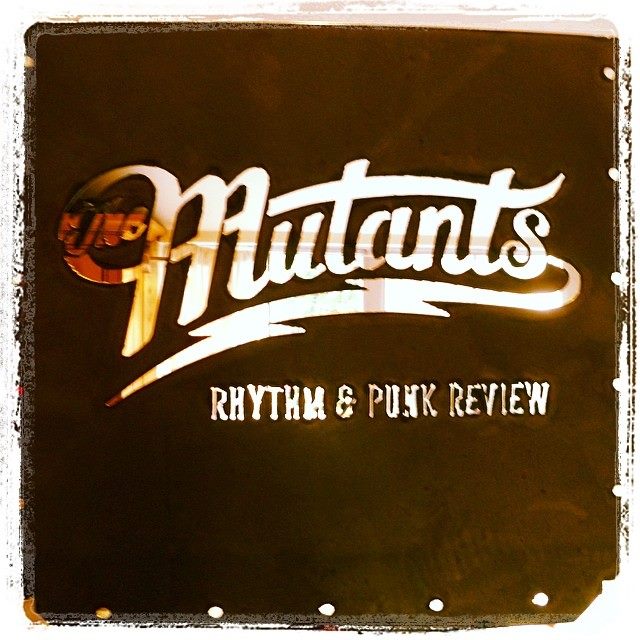 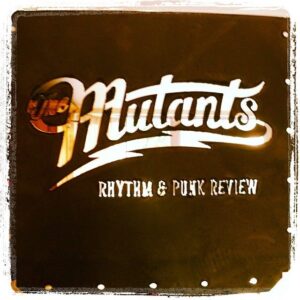 The Mutants – Rhythm and Punk Review (The Mutants)

I know quite a few people who are gonna love this album, the kinda people who are avid readers of Vive Le Rock magazine…not least amongst them is rock’n’roll animal Jon Flash, a man who has had is photo taken with every punk rock’n’roll legend going, has a great Thunders tattoo and lips to rival Jagger … he puts on monthly gigs at the Barn at the Milton Arms, Portsmouth and is a regular at punk gigs in London and the Rebellion type festivals.  Everybody in the sleaze-punk glam rock’n’roll world probably knows him. Half the singers on this album definitely do.  He personifies one of the punk spirits; the Glam Rock Get Pissed, Enjoy! one rather than the Protest & Survive DIY Hardcore one.

And this album attempts to be the soundtrack to his world. Why do I witter on thus? Well, if I didn’t I’d just end up slagging this album off….cos I’m more the arty pseudo-intellectual wing of punk where The Slits, Subway Sect, The Prefects are more valued than the Subs, Vice Squad and Vibrators. I have a lot of time for The Adverts, Eater, Penetration and Buzzcocks too and an undying love of Thunders and The Runaways, so I do like sleazy Trash but not, what I term the lowest common denominator punk, where a revisionist generic blueprint is strictly adhered to. The kind of stuff Vive Le Rock seems to love…

This will probably be VLR’s ‘Album of the Year’ an all-star cast of heroes singing original numbers penned especially and held together and masterminded by a crack team of punk rock’n’roll & ska professionals whose musical chops are unquestionably good.

It’s a strange album because half of it is brilliant, killer punk rock’n’roll and the other half is dumb fun with hollow cliches and rock’n’roll chest-beating.

Charlie Harper trying to get Westminster and sinister to rhyme does not constitute a revolutionary call-to-arms.

Beki Bondage urging you to get a rock’n’roll education doesn’t really excuse the fact that there’s a terrible mistake on the albums typography and is a Stars In Their Eyes Joan Jett impression.

Judy Nylon’s How Dare You is a definite highlight with its sexy (Nice and) Sleazy groove, growl and purr. It’s kinda like Marianne Faithfull’s Why D’ya Do It?

The always dependable TV Smith contributes two decent songs and Texas Terri’s voice can strip paint from a wall at ten paces, she’s such a living caricature of rock’n’roll abandon that she can get away with cartoon-lyricism and clichéd sleaze rock a la The Dead Boys.

Knox shoe-horns a couplet about the government being a nest of vipers into a pretty pedestrian love song.

Worst of all, and it really is parody of punk by numbers when Charlie Harper sings a song called Vomit , an incredibly lazy joke of a song which would be insulting to compare to Sick On You and is not quite on a par with Gob On You by the Not the Nine O’Clock News team.

Neville Staples contributes two upbeat ska-punk numbers which must’ve taken at least five minutes to write, but makes up for it with some great vocals on a duet with TV Smith on a brilliant piece of Ruts-y punky-reggae with politics you can dance to.

My thoughts about this album are inadvertently summed up by two glaring errors on the sleeve/artwork typography. Yeah, call me a pedantic literacy gnome I don’t care. A song sung by Charlie called Vomit is “Vomit Feat” in big bold type, when it should have course been called Vomit. Feat-uring Charlie Harper on vocals. And worst of all the albums title is misspelled.  The intention was for it to be REVUE (as in Jim Jones Revue ) but they have spelled it REVIEW.  If they’d looked up the definitions: revue; a light theatrical entertainment consisting of a series of short sketches, songs and dances, typically dealing satirically with topical issues. Whereas review; a formal assessment of something with the intention of instituting change if necessary.

The Mutants don’t think it’s necessary to institute any change. They like Rock’n’Roll and Punk and Ska and Blues just the way they are…. and this could have been a great album, with the right contributors. Nylon, Terri, TV, Kramer and Wilko are great, it works well and their contributions are is some of the best brand-new old-school punk you’ll hear. Rat Scabies drumming throughout the album is top notch as are the guitars which sound hard and sweet. The other vocalists and lyricists let the side down, though, and are just too cartoonish to be taken seriously.

All words Ged Babey whose author profile can be found here.