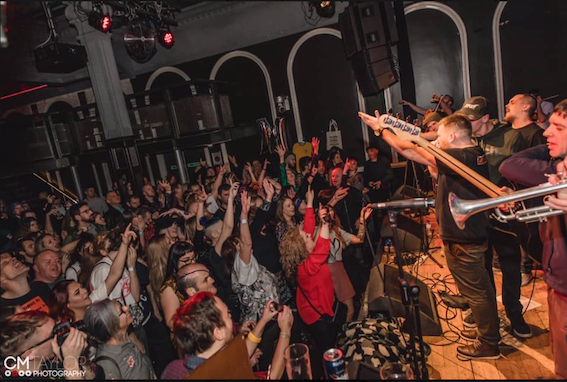 One of the great things in the post-punk era was the classic diverse bills – the kind of bills that make almost no sense now with vastly different types of bands held together by the thin thread of reacting to punk it had just left behind.

These days you rarely see such adventure.

Gigs are often genre based.

So tonight was a jolting thrill as an imaginatively put together selection of bands reflecting the several different roots in music at the moment. The sold-out show kicked off with Falling Ghost – two young men who had driven up from Birmingham to play their captivating, melancholic, electronic pop. With shades of those classic synth duos of the eighties but with a soundtrack sense of landscape to their breadth of ideas, their music pulls you in with brooding harmonies and a dark sense of big sky music. Ones to watch.

We are already truly biased with Glove, having produced their upcoming 4 track EP which is due out on our own, Louder Than War, label in the spring. With their faces painted with the familiar blue stripes the two wild-eyed women of Glove are electrified by music. They are already twitching when they are watching the first band and then they explode live like a shamanic force. Lazily we describe them as Patti Smith’s poetic skree jamming with the Slits but there is so much more going on that and yet, conversely, it’s also much sparser. When one of them plays a tribal pattern on the toms the other either scythes out a rhythm guitar or a dark, dirty groove on the bass whilst the poetry is delivered on top. On top of this, they have got the whole crowd dancing and already have their own personal Bromley contingent coterie of followers who stare with wild-eyed devotion and sing along with every word of the songs, which takes some doing, since nothing has been released yet and there a lot of words to pick out from fuzzy youtube clips. When their EP comes out Glove will be making a lot of noise.

Local lads Pleasures are the kind of skinny, bad jumper band that Manchester has been producing for decades – the kind of fantastically garish knitwear from the Fall to Pete Shelley’s bad knits to the recent days of Cabbage – the kind of exuberant and dishevelled musical wonk that is so compelling. They play fast and loose and they take no obvious roots. They are very much the sons of Cabbage and proof of how fast pop culture moves – what was once youth is now elder statesmen. To be lazy, they are like a collision between the Cabbage crew on Buzzcocks Spiral Scratch – a punky wonk with lyrical snarks and are a great raw rush of energy and ideas.

The Moods have been operating on their own level since they arrived on the scene as a tripped out guitar band. Since then they have moved a long way with a starling combination of brass, drone violins, big dark grooves and a rap crew making a very modern melange of Manc noise. This is the sound of these rain-spattered streets and the kind of music coming from a myriad of car windows – a dash of indie, a big dollop of rap, caustic local humour, lived in faces and celebratory local noise. Manchester music morphs and moves fast and what the city centre is glowing with is far different from where the Moods kick about in Moston a couple of miles away. They bring their own music and their own narrative and they make it infectious and they take advantage of not being fashionable in hipster terms but have their own sharp street codes. They tell their own truth and they play a set that brings the venue into meltdown. Good luck to them taking this revolution up the greasy pole of music.