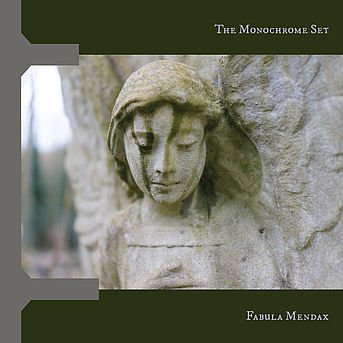 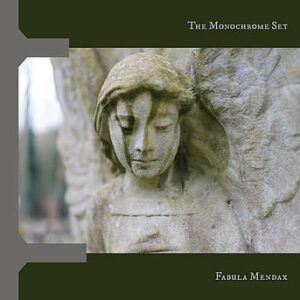 The Monochrome Set take a concept trip through medieval France.

The Monochrome Set continue a vein of productivity (this their sixth album in seven years) with new album Fabula Mendax, which the PR declares is based on manuscripts written in the 15th Century by Armande de Pange, a companion of Jehanne d’Arc (Joan of Arc). However, a very brief (admittedly) trawl of the internet failed to turn up anything to verify the existence of such a manuscript (admittedly some of the results were in French which isn’t my first language, or indeed second, third, or fourth) and, knowing the Monochrome Set’s penchant for creativity and imaginative warping of reality, I will take this with a pinch of salt. The album itself is a concept album, then, of sorts – something which singer and main songwriter Bid dabbled with in his wonderful, and woefully neglected, side project Scarlet’s Well (check spelling). Musically it is replete with multi-layered sounds, a plethora of interesting noises made by numerous distinctive instruments, and weird, gurgling, evil vibrant noises backed with delicious backing singers and deep throated monks.

Opener, Rest Unquiet Spirit, sets the tone with Gothic over and undertones; there is Latin chanting and the sound of a tormented, melancholic soul, and a banshee shriek or two. Imagine monks walking down a Gothic cathedral with a storm raging outside, and you get the feel of this song. Bid, in full voice, sounds as good as he ever did. Throw It Out The Window has a lighter feel with 50’s guitar and 60’s keyboards giving a jaunty tone. My Little Reliquary is darker and thoughtful, though when Bid sings about coming to see his little reliquary I can’t help but think of Terry Thomas offering to show me his etchings. Eux Tous is a tale of dark revenge; it’s dramatic with almost 60’s crooner hints, though maybe French chanteuse singer here would be a more appropriate comparison.

The atmospheric Darkly Sly, crackles with tension and the odd crash of thunder. Summer of the Demon is a classic TMS song, combining pop sound with dark lyrics that could have been written by Vincent Price. The scratching guitar is like crawling spiders over the skin, building up into a dark cabaret tune depicting our tragic hero running through shadowy streets with Gothic spires looming over him as he seeks out the shadows. I Can’t Sleep is Bid in panic mode, portraying the terror of the insomniac. Bid’s great lyrical skill is displayed in such lines as what is this hurricane and tornado of sheets? to describe the restlessness of insomnia.

Come To Me, Oh, My Beautiful is the sort of gorgeous pop tune that TMS excel at. The guitar and keyboards layer the sound over the crisp bass and drum with near perfection, and Bid’s vocals are a smooth seduction. Sliding Icicle has a blues beat with a sliding guitar and a driving beat, that could have sounded out of place but somehow manages to fit in simply because it is slightly off kilter. The album ends with La Chanson De La Pucelle, a ballad that conjures up a music of flowers opening and insects buzzing. It gives the album a bright ending after the darkness which has gone before.

The Monochrome Set continue to release clever, beautiful, quirky and thoroughly entertaining albums. They are fast becoming the most consistently brilliant band from the late seventies still releasing and performing music, with a back catalogue that most bands would kill for.

Fabula Mendax is a worthy edition in the Monochrome Set’s canon.