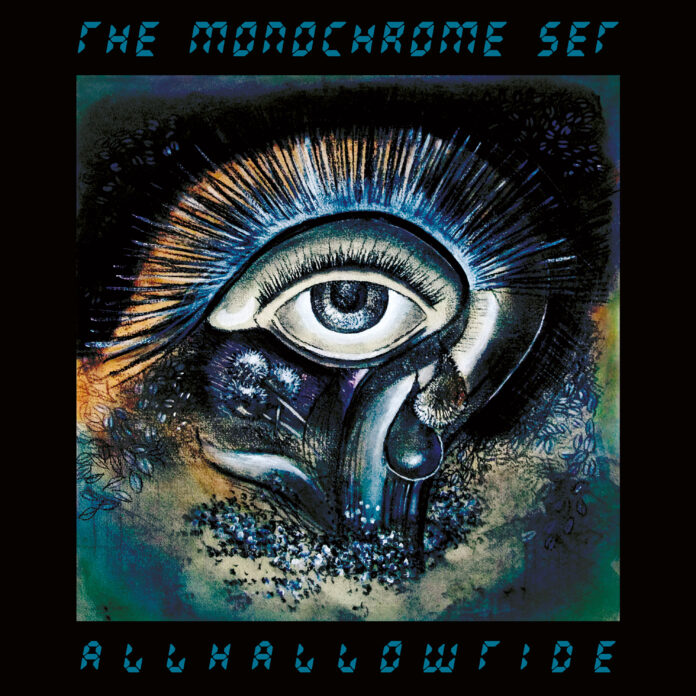 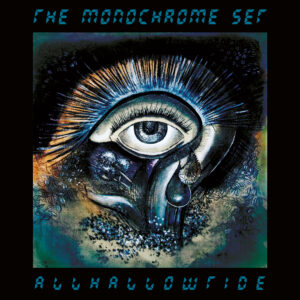 An unbelievable 44 years in the business and Bid, Andy Warren and the latest incarnation of The Monochrome Set release their 16th studio album. More deft songcraft of a cinematic and literary quality… debonair tones melded to infectious melodies, wit and sophistication.  Ged Babey tries to get his head around the press release which reads thus…

After an aeon spent in infinitely old cities of the body and mind, a magical creature glides back into its bedroom.

It has been changed forever – what once was human is now a higher being, an unnatural force, the new perfect.

It can still feel the exulting gaze of The Eye upon its back- thousands of years of brooding, planning, in deep, dark, secret places, waiting for the stars to align, the ideal body to infuse.

The air around it spits ferociously; the whines of the weak still sing in its ears, like the pathetic squeaks of old curtains as they are closed forever.

It stands before the full length mirror, its reflection now clouded with dust.

A lifetime of waiting; my poor mirror, here I am, I will clean you!

It picks up a cloth and wipes across the glass triumphantly!

It looks the same as before it left, all that time ago.

…and from a hidden door comes the strains of The Monochrome Set’s 16th and latest album, “Allhallowtide”, with its elegantly crafted pop songs, ornate melodies, sumptuous lyrics, all performed superbly by a rare and legendary band.

There was a fabulous quote from Bid last year about his alleged song writing process which went something like this:  “Well, I read a bit of Restoration poetry, listen to some Leadbelly and it comes out like this…” – Points foppishly at his bands latest album.

I’m not going to go over the bands long history or even the list of artists they ‘quietly influenced’ – except to note that Bid actually sounds more like Neil Hannon from the Divine Comedy on this album than ever before. (The Set’s tour manager and confidante insists I am wrong and it’s the other way round).

Newest recruit Athen Ayren on keyboards (and great backing vocals) makes her mark with her piano playing making the overall sound more sophisticated & grand and English than ever. If that were possible.

There is a distinct English Music Hall vibe as well as country, exotica, garage and cinema music influences. The Monochrome Set, for a band who ’emerged from punk’ really are an ornate, elegant chamber-pop combo nowadays.  The lyricism is both tantalizingly and frustratingly opaque, so to be blunt, the experience of listening to Allhallowtide is a laidback and distracted reverie rather than a concentrated affair. ( Maybe that is just me…)

As I said when I reviewed Maisieworld in 2018: The Monochrome Set have a maturity now which suits them well, adding to their debonair je ne sais quoi. They always have been something of a Gentleman’s Pop Group, with an eye for the Ladies, Leslie Philips-style. Being old enough to remember Black and White TV, even the bands name conjures up images of Ealing Comedies and Ian Carmichael to accompany their songs of manners and etiquette, peccadilloes and idiosyncrasies.

They were always out on their own, in a class and a hermetically sealed genre of their own. Allhallowtide is the latest in an impeccable catalogue that very few of their contemporaries have matched.

All words Ged Babey – except Press release content in italics.

The Monochrome Set Live Review from 2018 also by GB