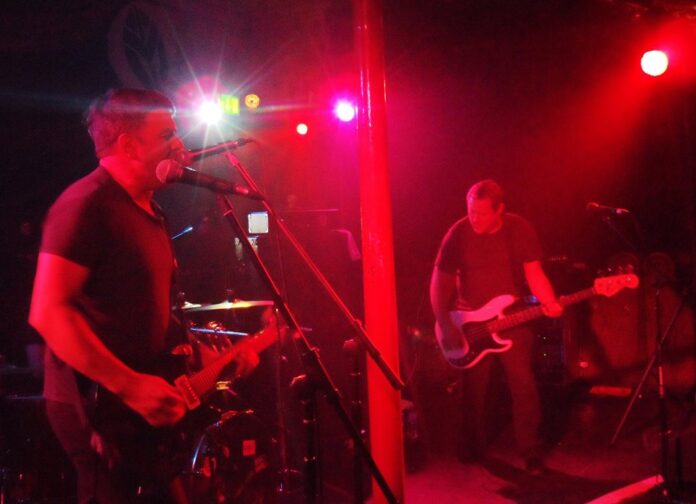 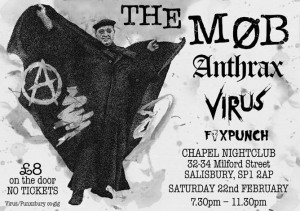 Punks old and young converged from the surrounding area for a nostalgic reunion of 1980s anarcho-punk bands.  Louder Than War’s correspondent Nathan Brown was among them.

Not being a native of Salisbury this was the first time I’d been to The Chapel. Yet another converted church, it seems to be a popular theme for venues in Salisbury.  Things seemed odd when we arrived with bouncers dressed in monkey suits but it transpires that this is a popular mainstream nightclub and the anarcho-punk gig was happening prior to the main club’s regular night.  Things took a turn for the weirder when we entered the room where the bands were playing, complete with disused organ and pulpit, to hear Dire Straits pumped over the PA. “Hard rock” seemed to be as close to punk as the sound crew could get.  Not exactly the ambience we were expecting!

First on were Foxpunch, a local youthful outfit.  I felt sorry for them as the sound was terrible: muddy, with the drums hardly audible through a guitar heavy mix.  Had they been given a fair crack I think they may have gone down better – offering up, as they did, a mix of US style pop punk/hardcore (a la NoFX) with occasional ska breaks.  “Tonight marks the 20th anniversary of my dad no longer finding me sexually attractive” left us confused; was this a brave admission of bumpkin child abuse? Or an attempt at humour?  The lighting tech (perhaps chemically enhanced?) filled the room with smoke and flashing lasers prompting the odd “When are Hawkwind hitting the stage?” comment.  The old ones are the best….

Next up were Virus, whose entrepreneurial activities had pulled the night together.  Hailing from Gillingham, a few miles down the road and having reformed in the last 10 years, they were the first of 3 bands from the 1980s – the Thatcher decade.  They are really tightening up their sound, getting better every time I see them. Maybe the soundman had woken up  as the PA sound had significantly improved in time for their set of what varied between speedy anarcho-punk taking a cue from Icons of Filth or Rudimentary Peni and rhythmic, tribal work ups with a Killing Joke feel, all topped off with accusatory messages barked at the crowd.  Singer  Dave, also a dance DJ I believe, was pogoing and bouncing between lines or leering sternly at the audience from his mic stand.  Highlights of the set included the tracks of their recent double A-side 7 inch.  A few of the more enthusiastic (and slightly inebriated) punters had a bop, one even proclaiming between songs that the rest of us were “a bunch of boring bastards”.  That brought a smile to my face! 25 years ago that might have been me shouting at the blurry crowd who won’t dance while I trip over my own drunken feet. 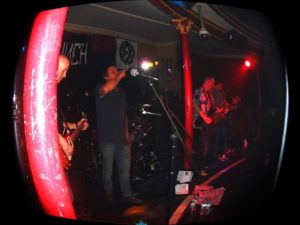 Kent’s Anthrax were the next up and treated us to most of their recent self-released LP,  All For The Cause,  along with a few classics from the 1980s – “They’ve Got It All Wrong” being particularly popular with the slightly more animated audience. Anthrax have a knack for writing meaningful lyrics and catchy tunes and they never fail to deliver, sounding as if they were transplanted from the 80s, yet at the same time sounding relevant and modern.  With dual guitars used effectively, one chugging away while the other plays melodic lead breaks,  and some catchy bass lines I am always amazed how Anthrax manage to sound clean & melodic without losing any of their power. A talented bunch!  They always appear really relaxed as well – at times it’s almost as if singer Gary is doing Karaoke down his local, nonchalantly crooning away with his hand in his pocket!  As they made an attempt at a track from their new split single “Beg Society”, they warned of the potential for error but it sounded fine to these ears.  Self deprecating and down to earth to the last. 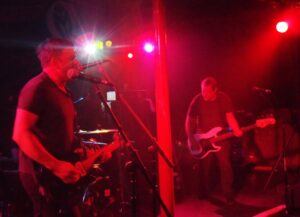 Finally, The Mob. Judging by the action on the dancefloor (yours truly included) they were the band most were here to see or was it the alcohol had kicked in? Or maybe just that they are a bit more danceable? Their recent single Rise Up! featured in the set which was well received but the bulk of people were probably here to see songs from their seminal 1983 LP “Let The Tribe Increase” and various singles from the 80s.  I will not attempt to describe The Mob’s sound here.  A staple of any self respecting anarcho punk’s record collection, yet also an acquired taste, they are the soundtrack to years of fear, protest and hope in early Thatcher’s Britain under the shadow of The Bomb. The Mob are almost shy, casting their eyes to the floor or sharing a knowing glance with each other – which revealed at one point that the rhythm section were out by a beat (although I don’t reckon anyone else noticed).  Mr Bubba, Winchester tattooist and old mate of the band, had brought a bubble machine along which kicked into action during “No Doves Fly Here” making for a surreal experience:  A nuclear holocaust song about  children who are “limbless corpses” juxtaposed with the joviality of a children’s party….

As the nightclub kicked off with Abba et al, the security rushed the scuzzy anarcho-punks out of the fire exit so as not to disgust their regular clientele.  A weird start and a weird end to the evening.  Was this night just pure nostalgia?  Despite the bands and many of the audience bearing ravages of time, all the bands have been bringing their music up to date rather than being content to live in the past so I’d say it’s more than nostalgia.  Mid-life crisis? I prefer to think that punks never really grow old and the mid-life crisis is the bit where they drift away from what truly moves them not when they return. Virus gave us a great night out with some excellent bands in a venue you would normally expect to get refused entry to!  But who likes normal?

Pics by Marc Freeman.  Words by Nathan Brown. You can read more from him here.