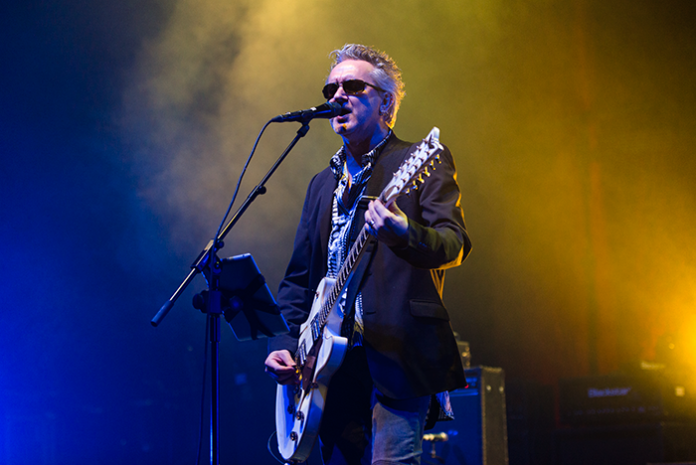 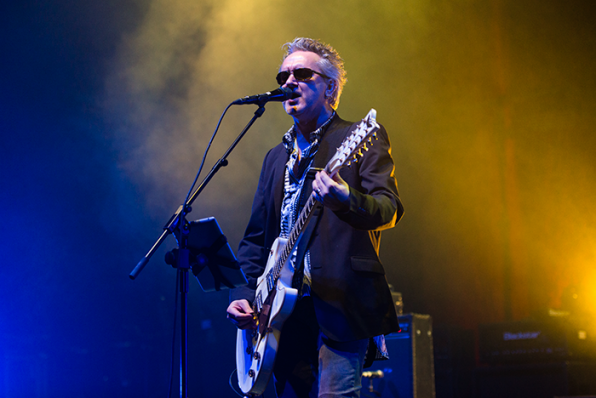 Photo of Wayne Hussey from The Mission © Tess Donohoe

The Mission, Fields of the Nephilim

Louder Than War’s Nick Holmes went to catch a double bill of goth giants at the end of the last year, The Mission, Fields of the Nephilim. One of our photographers, Tess Donohoe, was there too, and her pics are, as ever, brilliant.

“Never again. I’m done. That’s it. Even if the others change their minds, I’m out.” These were the words of Simon Hinkler, one of the founders of British goth rockers The Mission. The Sheffield-born guitarist was speaking after his guest appearances at what had been billed as the band’s farewell shows. Four sold out nights at Shepherds Bush Empire in 2008 were supposed to be the end of an era that had lasted over two decades. Never say never.

In 2010 Wayne Hussey, apparently reluctant to start with, announced the original trio of Hinkler, bassist Craig Adams and himself would be joined by former Spear of Destiny drummer Mike Kelly for 25th anniversary shows the following year. The setlist comprised of songs from 1986 to 1990 and after continuing to tour through 2012, including an appearance at Download Festival, the band revealed it was planning to record a new album. “The Brightest Light” was released in September 2013 and received good reviews.“The Mish” was definitely back.

There may be less pasty looking folk in black clothes with big hair following them than in the good old days, but there is still a hungry audience for Hussey and the gang, as an almost full Brixton Academy demonstrated. Similar to the double-headline tour they did with Fields of the Nephilim in 2011 it would be a gig of two halves. The big difference this time was that The Mission had new material to air, the first songs from the (nearly) original line-up in almost a quarter of a century. How would they fare? 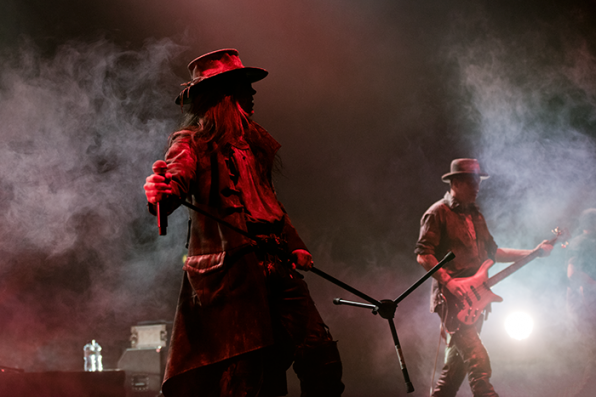 Photo of Fields of the Nephilim © Tess Donohoe.

It didn’t take long to find out. They opened with the first track from the new LP, slow building, brooding “Black Cat Bone”. Later in the set “Girl In A Fur Skin Rug”, a tribute to Marianne Faithfull, plus “Everything But The Squeal” which has an Adam Ant-like vibe, and the single “Swan Song” all went down well. Classics including “Beyond The Pale”, “Hands Across The Ocean” and the band’s first release, “Wasteland”, had the entire venue shaking and the rapport rekindled between the band members was obvious. After sweeping through Neil Young cover “Like A Hurricane” and anthem “Blood Brother”, Hussey ranted about the venue saying he couldn’t “see, hear or feel” the audience. It should be noted he still insists on wearing shades indoors! The house lights went up as the crowd responded by roaring “Deliverance” back at him and carrying it on after the band left the stage. 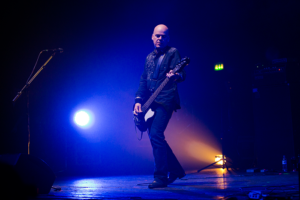 (Photo right Craig Adams The Mission) As the intro tape of an Arabic-style female vocal and heavy drum rhythm kicked in, what had been nicknamed “pyramids of man love” at the Shepherds Bush shows sprung up around the crowd. If some otherwise entirely heterosexual fellas might swerve for Morrissey, possibly some would for Hussey too. It is a bizarre sight. Bare-chested balding blokes with beer bellies climbing onto each other’s shoulders to gesticulate wildly at the silver-haired frontman. He knows exactly how to wind up his audience, leaping down into the photo pit to clasp hands and sing into adoring faces. The cause of this mesmerizing effect? Probably their best known song. Though “the hit” sometimes becomes a millstone for a band, “Tower of Strength” is a timeless two-way communication that resonates on several levels. The words are a plaintive cry. It works as an ode to a loved one but also between the artist and the audience. “It would tear me apart to feel no-one ever cared for meeeeeeeeeeeeeee!” wailed the singer and the entire crowd belted it out in unison. Add to that the swirling, ascending melody and it makes for communal melodrama that is deeply affecting. To prove the point Hussey fell at Hinkler’s feet, prompting the guitarist to nod and grin as the song rose to its finale. Arguably very few bands achieve that kind of magical connection.

It would be a hard for anybody to follow a show like that but it was only half-time. Some of the crowd left and new faces appeared. While a good number clearly liked both bands it was obvious some were more tribal in their tastes. The changeover was briefly interrupted by a bloke in a Father Christmas suit running onstage and jumping about to a video of an anti-festive song entitled “Fuck Off Santa”. This was Bob Noxious, and it was almost certainly the biggest venue he will ever appear at. That’s one thing surely ticked off his bucket list! 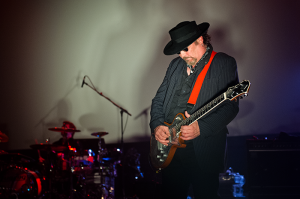 (Photo right Simon Hinkler The Mission) The stage was reset for another act whose frontman is the only ever-present member and has gone through a football team’s worth of players over the years. Fields of the Nephilim’s leader Carl McCoy is rather a different beast from his opposite number in The Mission, being a more reserved character of few words. It is 25 years since “The Nephilim” crashed the UK album chart, landing in the top 20 on its release in 1988. McCoy decided to mark the quarter century by drilling his current deputies to perform (almost) the whole thing as a one night exclusive.

A loud and excitable American woman was enthusing about how she had travelled all the way from New Jersey to witness this special gig. She was silenced as a huge rumble shook the building and smoke filled the air as if Smaug was out the back with serious bellyache. From the bluesy vibe of opener “Endemonadia” and slow burn of “The Watchman” to thunderous run throughs of chart single “Moonchild” and “Chord of Souls” the atmosphere built steadily. McCoy’s low croons, roars and growls were suitably menacing and though he remained silent between songs the frontman became increasingly animated. Kitted out like a cowboy from a Jules Verne world (did this guy invent steam-punk before it was a term?!), he began to stroll up and down the edge of the stage. Occasionally he stopped to wave his arms in the air, demanding the audience either sing or acknowledge him. As the photos show he couldn’t resist a smile or two. No miserable goths here!

After a crushing “Last Exit For The Lost”, the main set closed with “Celebrate”, on which the singer displayed a rather Johnny Cash-like vocal style both in tone and timing. The encore exploded with “Psychonaut” and “New Gold Dawn” had the audience jumping and singing as McCoy snarled out the words. The night ended on a more sombre note than that of the previous act but it was no less emotive. “Mourning Sun” echoed round the building with cries of “We are fallen! We are fallen!” What the word epic was created for. The quiet man of goth rock then simply said a polite “Thank you” and disappeared into the haze from which he came.

As The Mission finished, Wayne Hussey said they won’t be back until 2015 and no doubt there will be a 30th anniversary tour the following year. Still no retirement yet for Simon Hinkler presumably!

Fields of the Nephilim will return sooner. After European dates they will play on the Friday night of Alt-Fest in August. Full line-up and ticket details here: alt-fest.com

All words by Nick Holmes and all photos © Tess Donohoe. More of Nick’s writing on Louder Than War can be found here. You can also find Tess’ website HERE.