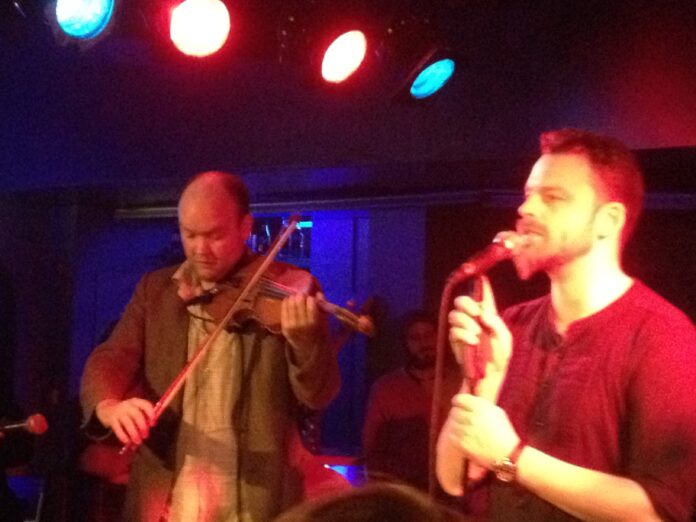 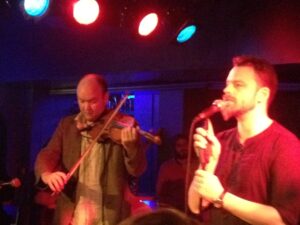 The Miserable Rich are a curious phenomenon. Having released their third album last year, they’re still struggling to make a major breakthrough in the UK despite gathering a loyal but small following, whilst their contemporaries such as The Leisure Society get critical plaudits and festival and prestigious support slots. In contrast, on the Continent, they’ve built on momentum from their early releases to the extent they can go on a month long tour of Germany, Austria and Switzerland, and, despite the double-digit minus temperatures and the fact it’s Sunday evening, come close to filling venues like Studio 672 in Cologne.

The sound has been fleshed out for this album with the addition of drums and more guitar into the mix and it makes for a more robust structure to the songs live, but they still allow each of the band to show off their talents and the range of instrumentation including violinist (Mike), double bass (Rhys), guitar and piano (Ricky), cello and keyboards (Will) and new drummer Martin. The songs have been allowed to develop on the road and not stagnate and aren’t just running through the motions sounding the same every night as is the trap that many bands fall into.

However, their not-so-secret weapon, apart from a series of killer songs that allow them to play close to two hours without a dip in the set, is front man James de Malplaquet. He disarms the Cologne crowd, which can be notoriously staid, completely with part-pigeon German, part-English stories between songs of videos about squirrels (Let Me Fade), asking them to sing the “ba, da”Â line of their “one happy song”Â (For Heaven’s Sake) which will feature on their next album, introducing cellist Will as “the man with two hands”Â as well as engaging the crowd throughout with stories about the songs, the themes of ghosts, sex and death, whilst deriding his own German. 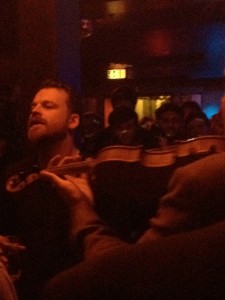 The set focuses on last year’s excellent “Miss You In The Days”Â album, the loose theme of which is ghost stories inspired by its recording at Blickling Hall in Norfolk. They even have the repertoire to leave last year’s Single of the Year (for me) Anything’s Possible, which was left off the album as it didn’t quite fit, out of the set. There’s still space for crowd favourites Monkey, which has undergone another radical reworking, and singles The Time That’s Mine and Chestnut Sunday as well as a short cover of Edie Brickell’s Ghost Of A Dog.

The main set closes with the highlight of the album and of the show, Ringing The Changes is a powerful call-to-arms on the record, check out this Youtube clip that works even better live as it builds into one big communal musical hug before dropping down to a quiet conclusion. Just as it draws to a close, a gentleman at the back simply says “WunderschÃƒÂ¶n”Â and it’s difficult to disagree with him.

For the encore, the band pick up equipment, leave the stage and ask the crowd to create a circle for them. The crowd are at first unsure what to make of it, but when they play requests for Pisshead, Boat Song and Hungover to total silence, apart from the odd clinking of glass from the bar, it’s clear that they get it. The band returns to the stage for True Love, another brooding epic track about spirits and ghosts from the last album to close the set and another successful tour of Germany.

Following the re-release of “Miss You In The Days”Â, the band are back out on tour in April in the UK, playing London Lexington (17), York Stereo (18), Preston Mad Ferrit (19), Manchester Deaf Institute (20), Oxford Jericho (21), Leicester Musician (22), Norwich Arts Centre (23), Sheffield Riverside (26), Chester Telford’s (27), Cardiff Ten Feet Tall (May 3), Bristol Thekla (4) and Brighton Green Door Store (5), before heading back to Germany. I’d highly recommend checking them out.