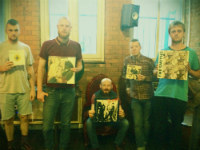 The Minx’s punky power-pop has won them a load of fans around the Manchester region and beyond, and as you might imagine, the band draw influence from a very broad range of bands and genres.

Over time, they have all built up vinyl collections of their most treasured songs – so, with their new single coming out in four weeks, and their biggest headline gig yet, at Manchester’s The Ruby Lounge on Saturday 23rd August, we asked them what their favourite piece of vinyl in their collections were and why.

And it turns out that The Minx’s record collection has a few punk and indie classics you might expect, as well as some Northern Soul and post-punk pop you might not…

“The Clash might be my favourite band but this record means more to me than just that, when my uncle passed away my aunty dug out his vinyl collection from the loft and gave it to me.

I never got a chance to have a proper chat with him about music, and after seeing his collection I really wish I could have. This record was in the pile. I never knew my uncle was a fan of my favourite band.”

“I was introduced to the world of vinyl records as a consequence of attending Northern Soul events across the country with my mates, we were “The Manchester Mid Tempo Soul Boys” and we were into 45’s.

I started buying cheap records to fill my box but soon the desire to buy big expensive tunes got the better of me and I spent a weeks wage on ‘Ann Sexton – You’ve Been Gone Too Long’. It was my favourite record at the time and I was given the contact details of someone selling it on the original yellow label, we did a deal over the phone and I was the proud owner.

This record made me appreciate vinyl more than any record had done previously and it still sounds better than anything else when the needle catches the intro, for that reason it’s my prized possession without a doubt.”

“I first heard this song when I was little. I didn’t have a clue about music, I was just messing around with my parents records and this was my favourite. I’d just dance around to it over and over.

The record got lost over time and I was absolutely gutted. I few years later, my parents bought it for me again and I’ve treasured it ever since.”

“I’m almost ashamed to say that for a long time I had never listening to the Talking Heads, and my first experience with them was when a friend gave me the ‘Stop Making Sense’ DVD. It changed my whole perception of what a live performance can be, how something so simple can be so effective on stage, it was an eye opener.

So naturally, when I spotted the 12″ in a charity shop, there was no stopping me from buying it, and to this day I’ll either play the record or DVD to get myself psyched for a big gig.”

“I chose this vinyl for a few reasons really. The Smiths are lyrically and musically up there with any band I can think of. Stephen Street is also one of my favourite producers.

Whilst it may not be my favourite Smiths record, Chris had it signed ‘Happy Birthday Paul, from Johnny Marr’ for my birthday a couple of years back.

And with (cliche incoming) Johnny Marr’s guitar work being one of the reasons that made me want to be in a band, that just makes it my favourite vinyl in my collection.”