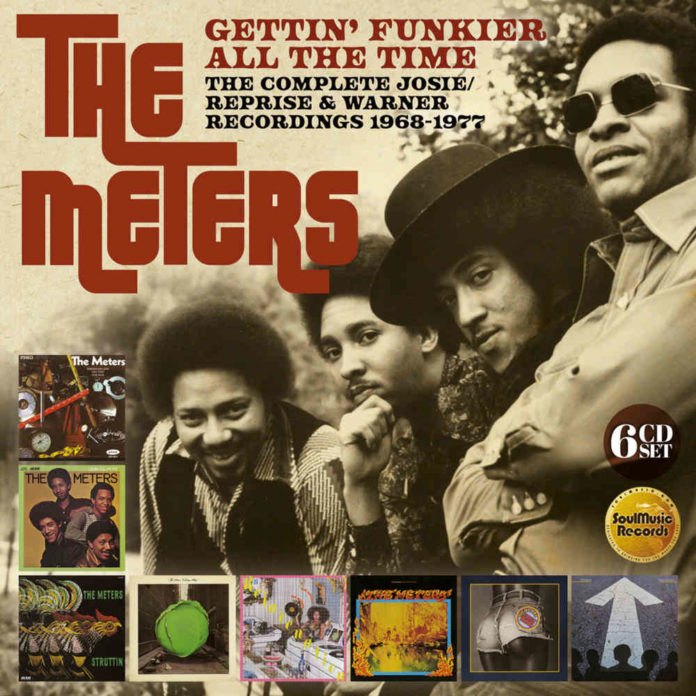 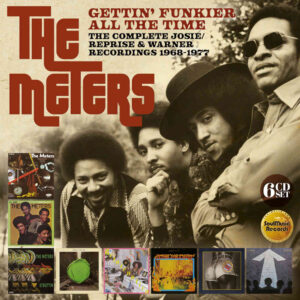 The Meters: Gettin’ Funkier All The Time

The Complete Josie/Reprise and Warner recordings 1968-1977

Spotted by the legendary Allen Toussaint and his business partner Marshall Sehorn when they were playing clubs in New Orleans in the mid sixties, they were originally recruited by the duo to back artists signed on their Sansu label but their potential led Sehorn to push them to record their own tracks and negotiate a record deal with Josie Records. Mostly recorded live in the studio, their self titled first LP included their first two singles “Sophisticated Cissy” and “Cissy Strut” which both managed to secure chart placings. The album shows that The Meters already at the top of their game with a very distinctive sound that set them apart from their other funk contemporaries.  The arrangements on the record have no fat and every note counts. Tracks are built around the interplay between Leo Nocentelli’s guitar and Art Neville’s keyboards which the groove of George Porter and Joseph “Zigaboo” Modeliste laying a solid foundation. The rest of the album follows suit with one infectious number following another.

Released only six months after their debut, “Look-Ka Py Py” followed the stylistic path of its predecessor. The band refine their formula, the arrangements get slightly busier (“Pungee”) and George Porter’s bass guitar really comes to the fore (“Thinking”). The title track (an homage to the failed engine of the car they used to tour with) features some vocals while the rest of the album (yet again) proves to be a treasure trove of tight grooves that was later mined by numerous hip-hop acts. The album replicated the chart success of its predecessor and conforted the band that they were going in the right direction. “Struttin”, their third LP sees them attempt a fuller sound with several songs featuring vocals such as the incredebly catchy “Chicken Strut” that opens the record or the  great cover of Jimmy Webb’s “Whichita lineman” perfectly suited to The Meters’ languid style. Elsewhere, the band groove with confidence (“Tippi-Toes”) or put their own stamp on classics soul classics (“Ride Your Pony”). This turned out to be their last release for Josie with the label going bankrupt soon after its release.

The band swiftly moved to Reprise for their next LP  “Cabbage Alley” and used this opportunity for a striking change in their sound that is apparent straight away with the distorted guitar riff that opens the first number “You’ve Got to Change (You’ve Got to Reform)”. The tracks featuring vocals outnumber the instrumentals and the quality of the songs reaches a new level. For a band rooted in instrumental tracks they display great confidence in vocal arrangements (“Cabbage Alley”). A smoother sound that should have brought them new listeners but that surprisingly failed to yield any chart placements. A failure partly attributed to Reprise’s inability to market a band that had few similarities musically with the rest of its roster.

Undeterred by this, the band ploughed on and their following LP “Rejuvenation” was another towering funky achievement as proved by opener “Stay Away”  with its infectious horn arrangements and catchy chorus. The soaring  ballad “Love Is For Me” is a high point while “What’cha Say” has serious commercial appeal and could have easily been released as a single. As stated by Charles Waring in his liner notes, “It Ain’t No Use” is the album’s “epic centerpiece” that sees the band really stretch themselves in a thrilling instrumental jazz rock section. Again the album inexplicably failed to chart and the band were left to ponder if it was worth continuing as they were struggling with management issues and lack of chart success.

Made in trying circumstances when the band was thinking of calling it a day, “Fire on the Bayou” sees The Meters release a fine album that if slightly less exhalirating than its precessor retains the usual level of quality the band has accustomed us to. The soulful “Out in the Country”starts the record on an upbeat note while the funky “Love Slip Upon Ya” with it neat electric piano parts grooves along nicely. “They All Ask’d For You” sees drummer Zigaboo churn an excellent vocal reminiscent of Dr John while Porter shines on “Can You Do Without” with a particularly memorable bass line. Five great bonus tracks complete the original album. Going for broke on their their next release the band decided to embrace the disco craze. Unfortunately “Trick Bag” maybe came a bit too early when disco hadn’t swept over America liked it did the following year (Chic being the perfect example of being in the right place at the right time). Starting with the punchy “Disco is the Thing Today”, the album moves in smoother territoritories than its predecessors as proven by the love ballad “All These Things”. An album showcasing The Meters adapting to the times but not selling out. Their instrumental take on James Taylor’s “Suite For 20 G” is a real treat for the ears and again the record is completed by several bonus tracks (including a great version of Neil Young’s “Down By The River”).

What turned out to be the band’s last album “New Directions” was recorded for the first time with another producer than Allen Toussaint. In the liner note most members recall the experience as an interesting one, even if a little daunting after so many years of recording with Toussaint. It certainly enabled the band to go out on a high with another criminally ignored record at the time of its release. Starting with a bang with “No More Okey Doke” on which The Tower of Power horns add to the quintet’s sound, the band follow with a killer version of the Toussaint penned “I’m Gone”. The smooth “Be My Lady” certainly deserved better than the disapointing chart placing it achieved when it was released as a single (no78). Unfortunately the Neville brothers decided to leave the band before the record came out and the band called it quit soon after this.

Neatly packaged in a clamshell box, this collection groups together all of The Meters’ recordings on six 6 CD’s with numerous bonus tracks.This box is an excellent way to (re)discover a band whose commercial success only occasionally matched the quality of their music.