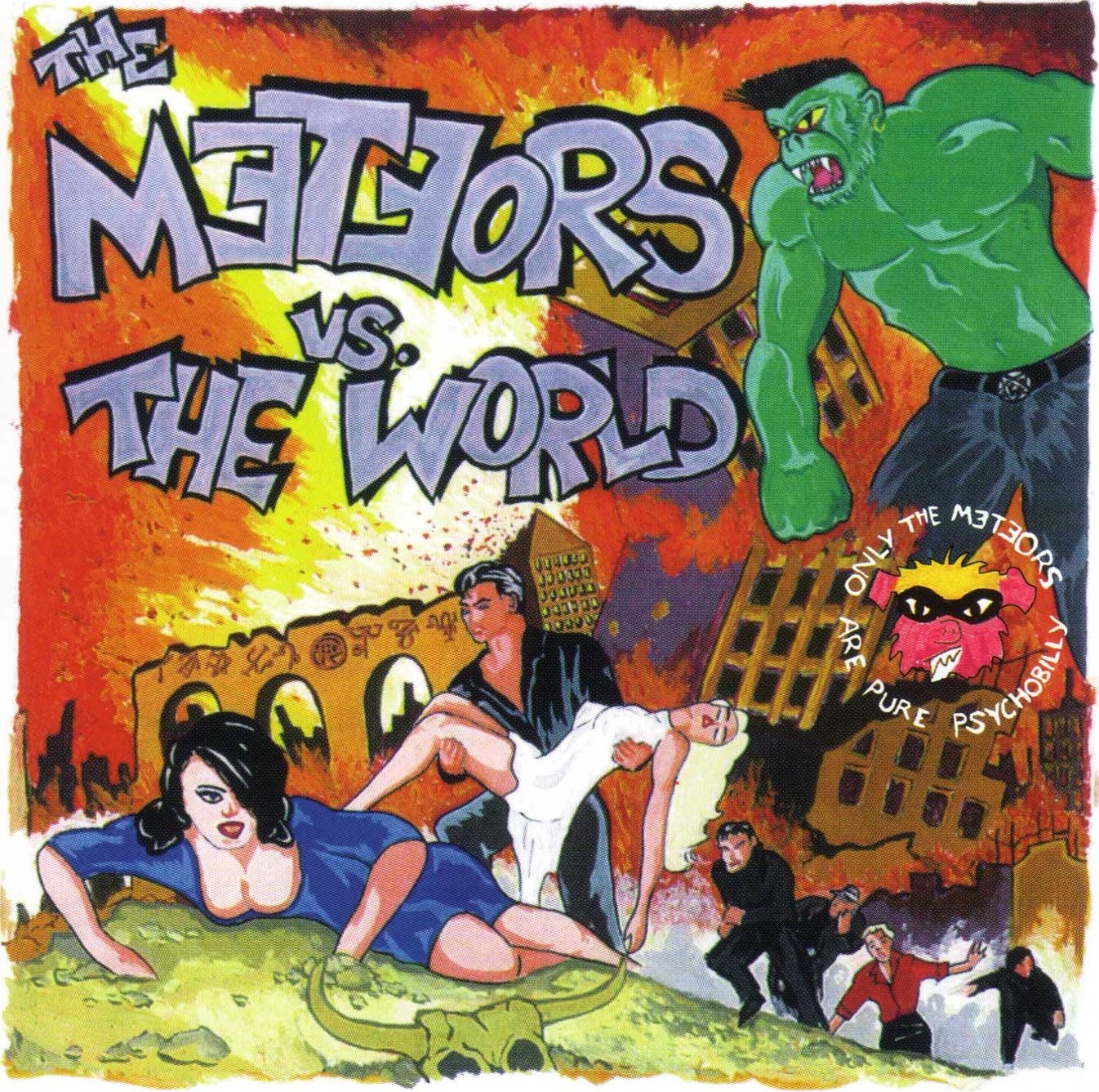 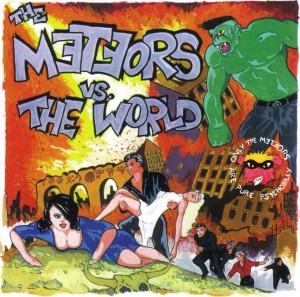 ”ËœThe Meteors Vs The World’ was first released by Anagram Records (now an imprint of Cherry Red) back in 1999 – the double album being a collection of 17 Fenech composed songs, half a dozen live tracks from the Tenth Anniversary Big Rumble which the band headlined, plus two tracks recorded live in Las Vegas, throw in five alternate versions of previously released songs, plus two hidden bonus tracks and on the face of it this could be considered as a hastily assembled mixed bunch.

That however would be way off the mark ”â€œ not that The Meteors nor any of their fervent fan base would care a jot what any reviewer thought, the band infamous for their “If you don’t like us ”â€œ fuck off”Â stance have survived, in fact thrived under the guise that they were the originators of, and the true purveyors of ‘pure psychobilly’.
The Meteors’ at the time of this recording consisted of front man P Paul Fenech, drummer Wolfgang Hordemann and bassist Shaun Berry and was recorded within the band’s own In Heaven studio, Fenech also engineered, mixed and produced the entire release.

What we get are The Meteors own tracks which demonstrates Fenech’s innate understanding of song writing, each track is hook laden, there are melodies and clever vocal twists and turns ”â€œ it’s in the delivery that The Meteors differ, everything is darkly brooding, at times threatening. Fenech sings in a sneering malevolent tone, the themes are standard Meteors fare, contempt for those outside their circle as on the title track and ”ËœGet Outta My Way Now’ with its “If you ain’t got nothing I can use/Don’t play the game your gonna lose”Â, or the wonderfully titled ”ËœMy Baby’s Got A Flamethrower’ which suggests a girlfriend is going out to commit a revenge arson attack, Zombies are revisited as we discover during ”ËœShe’s A Zombie Now’ that a deceased girlfriend rises at midnight to rejoin her muse “She won’t lie still in the stone cold ground/She’s a zombie now”Â or perhaps ”ËœSlow Down You Grave Robbing Bastard’ though sadly the lyrics are not reproduced. The Laz trilogy is included in full during which Fenech assumes the guise of a captured serial killer “Im your executioner/Your death is my reward/Its time to meet your maker/And die by the sword facing execution”Â

The live material captures The Meteors in their prime, six tracks delivered with the power of an assault force, no quarter is offered or taken; from the instrumental ”ËœDie World’ to ”ËœThe Crazed’ which includes a radio style introduction to a cover of the Troggs ”ËœWild Thing’ and a cover of Lee Hazelwood’s ”ËœThese Boots Are Made For Walking’

There are also 2 hidden cover songs, on the first disc you get the bands take on the Beach Boys “I Get Around” and on the second disc the Meteors destroy Elvis Presley’s “Rock-a-hula”.

The Meteors even at the time of the albums initial release had put out seventeen full length albums, that number has now risen to in excess of thirty five, not counting compilations, re-issues etc ”â€œ if you are a previous Meteors fan you know exactly what to expect. The Meteors themselves see no reason to change their style, they play pure psychobilly and their continued worldwide appeal justifies their uncompromising stance; they have now played over 6000 gigs covering every continent bar the Poles. If you are new to band, this album would be an excellent introduction; it’s an album that demonstrates the variety of The Meteors sounds though staying within the confines of psychobilly particularly within the studio tracks. You get a feel for the Meteors and also experience their live onslaught, and perhaps a glimpse of the bands twisted humour ”â€œ how else could you explain the Beach Boys cover?