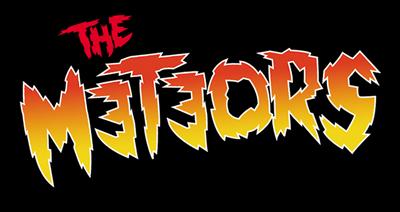 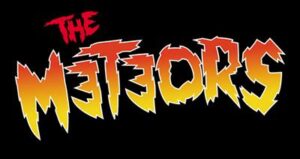 After 34yrs a band should really have diminished, lost some of their initial impact – certainly a band as well travelled as The Meteors, who after close on 6000 gigs claim to have played on every continent bar the Poles – they might be excused for perhaps ‘going through the motions’ – however in the subterranean lair of Manchester’s Tiger Lounge The Meteors are continuing to not just brush aside such suggestions but to stomp them underfoot as frontman P. Paul Fenech bellows “Fuck you” before launching his 3pc ‘pure’ psychobilly band into a set that cherry picked tracks from across their entire history – every song delivered with molten fury, the bands energy matched by the boisterous wrecking meted out in the mosh-pit by various members of the W.W.W C.

The reputation of both The Meteors and the World Wide Wrecking Crew perhaps forcing the gig organisers to set up the crash barriers not only at the front of the ultra-low stage but also at the side; the barriers were necessary as bare chested Crew members hurled each other about, though clearly in a good natured manner – despite being just six foot from the stage I was unable to get a clear view; this will explain the lack of accompanying photographs – my line of sight being limited to just Wolfgang, the behemoth drummer hammering out a hot rod beat as Fenech delivers his hellfire sermons… 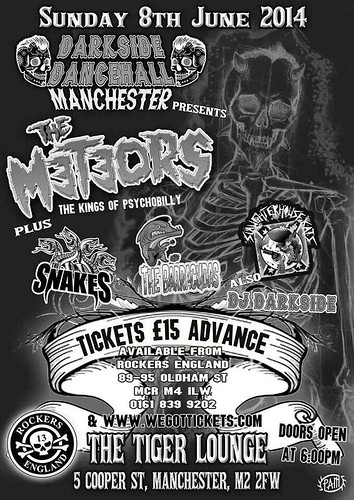 ‘Maniac’ from their 1981 debut ‘In Heaven’ whilst clearly a Meteors track perhaps benefits from a level of subtlety that was diminished by the time the band delivered their anthemic cover of the Anti-Nowhere Leagues ‘I Hate People’…though choosing to cover the iconic ‘Rawhide’ demonstrates Fenech’s innate knowledge of rock ‘n’ roll, at the end of ‘Lil Red Riding Hood’ Fenech hollers at a lad trapped against the barriers “don’t wave that fuckin bottle in my face…or I’ll knock your fuckin teeth out” then launches into the much covered ‘Domino’…despite having heard this track covered by so many artist The Meteors still managed to deliver it in their own style, clipped vocals, barked as opposed to oozed; then ‘Fuck Your World’ from 2012’s ‘Doing The Lords Work’ burst forth propelling the mosh pit into utter chaos, bodies colliding with the PA system as spear stacks wobbled precariously, only ‘Wreckin Crew’ could surpass this, this time Fenech’s brother Carlos from support band The Snakes guesting on backing vocals.

An accomplished and intense performance from a band often blighted by their own reputation, a reputation that sadly obscures their obvious ability to play some of the most incendiary rock ‘n’ roll you are ever likely to hear.