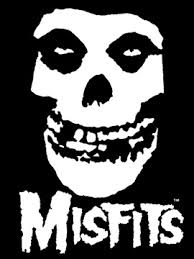 It’s perhaps the most lucrative merchandise in rock n roll- everywhere you go you see a Misfits shirt and with the band’s fractious relationship between former members it was all going to end up in court at some point.

The former frontman of the band Glenn Danzig who left the band years ago, finally took his former cam padres to court over the rights to the merchandise and has lost the case.

The trigger point and his claim was that they had made “secret” merchandising deals with several retailers, such as Hot Topic which violated a 1994 contract regarding profits gleaned from the Misfits logo.
A statement from the band (via Altpress) in response to the April 3 lawsuit explained that Jerry Only secured exclusive legal right to tour and record as the Misfits in 1995, and that Danzig made clear that he wanted no public association with the Misfits. It described Danzig’s lawsuit as “a sour grapes tantrum based on outrageous allegations, the majority of which are completely false, while others are ill conceived and grossly misguided—and will be proven false in court.”