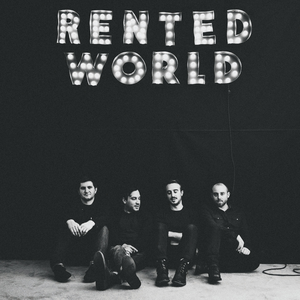 The Menzingers make “the kind of pure punk rock that I grew up with” according to their label’s boss (and Bad Religion guitarist) Brett Gurewitz. Their fourth studio album has just been released and Louder Than War’s Ian Critchley passes judgement on it.

Unless you’re looking at YouTube playlists then ‘Party Punk’ is not a real genre. And neither is ‘Driving Punk’. Yet The Menzingers have bridged the gap between these two non-existent musical styles with the opener to their latest record Rented World. ‘I Don’t Want To Be An Asshole Anymore’ has a healthy mix of both upbeat and fun melodies as well as a 10cc of genuine optimism and is music that works both for fun frolics with friends and solo listening. The record continues in a similar vein throughout, songs that can warrant both drunken dancing as well as deep reflection. In this way Rented World feels like this years equivalent to Dillinger Four’s 2008 C I V I L WA R, a perfect summer record that seems to be nothing but joviality at first glance but a simple scratch of the surface reveals a firmly rooted sense of self-contemplation.

The only downfall of The Menzingers sound is that since their second record, Chamberlain Waits, rocketed the band into the forefront of the punk rock world there have been a multitude of copycat musicians which, having being flooded by a very similar style during practically every support slot of punk shows, has somewhat staled this band’s sound. The Menzingers are still doing this new breed of punk rock better than any others, ‘My Friend Kyle (PDC)’ is the perfect confirmation of this with a pounding back beat leading a track that feels as if it has been created for the sole purpose of live crowd singalongs but, unfortunately, the many imitation ‘zingers have slightly dimmed the shine of their uniqueness.

‘In Remission’ is the first single to be released off the album and seems to be strongly influenced by Motion City Soundtrack’s Even If It Kills Me. Personally I can’t help but think that ‘The Talk’ would have been a much finer single choice, merging Green Day’s Nimrod-era sound with that of The Bouncing Souls.

If you’ve never heard The Menzingers before than Rented World is a damn good album to start with. And if you have, well, you know what these guys do best and will not be disappointed.

The Menzingers can be liked on their Facebook page and they tweet as @themenzingers. The album can be bought from Epitaph Records.

All words by Ian Critchley, find his Louder Than war archive here.