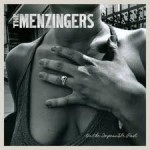 Those of you who follow the music press will have seen that The Menzingers had their tour van robbed last week. Ã‚Â£10,000 worth of lost items / money. They launched an appeal through Banquet Records & within a few days had received enough donations that they had to make an announcement telling people to stop trying to give them money. If you’ve ever needed proof that, more so than any other genre, punk rock is about community and helping people out this is it.

Boy, do The Gaslight Anthem have a lot to answer for.

Before Brian Fallon discovered that there was more to Bruce Springsteen than un-patriotic patriotic rock music and shit loads of denim, your standard self-respecting punk wouldn’t be seen dead listening to The Boss. Then, The ’59 Sound emerges, and punk rock still hasn’t got over it. Since this monumental discovery by Mr. Fallon et al, many of the more learned punk rock bands have made a concerted effort to drape their music in a warming layer of refined twangs, and pepper their lyrics with an erudite effervescence. Don’t mistake this observation for a complaint, the beauty of punk rock is that it can, and should, soak up external influences like a musical sponge. Sometimes though, why mess with perfection?

Over the last few years, The Menzingers catchy-as-fuck orgcore punk has fast-tracked the Scranton act to the pinnacle of the US punk rock pyramid. 2010’s Chamberlain Waits was an absolutely supreme record – a nudge over 30 minutes of punk rock perfection, which saw The Menzingers smash together powerful riffs, hammering drums, shouty gang vocals and pretty much everything else you could want from a punk rock band with enviable ease.

Of course, the problem with releasing a near-perfect record is how do you follow it up? For The Menzingers, the best option was to take the Fallon-approach (trademark, Rob Samuels) ”â€œ they plonked themselves down, bought a dick-load of whisky, chucked Born To Run on a loop, and started writing. The result is On The Impossible Past, and it is great.

From the records beginnings, with the blues-charged opening-twiddles of ”ËœGood Things’, through to the final pleading cry of ”ËœFreedom Bridge’, On The Impossible Past ebbs and flows with the ease and simplicity which is now a minimum expectation from The Menzingers. Songs like ”ËœThe Obituaries’ and ”ËœGates’ show a tremendous amount of maturity – gone are the angry shouts and thrashy guitars, replaced by angst-ridden wails and gently strummed patterns in their place.

That isn’t to say that The Menzingers have gone soft, far from it ”â€œ they can still bawl and bellow with the best of ”Ëœem. Tracks like ”ËœSun Hotel’, and ”ËœCasey’ hark back to their earlier work, and bound along in familiar fashion. Simply put, On The Impossible Past is not a record of revolution, but instead evolution, showing The Menzingers in another light, and demonstrating a pleasing element of development. Sometimes though, why mess with perfection? The addition of Fallon-inspired blues riffs to the firm punk foundations that are so prominent within On The Impossible Past is great, sure – but it’s not Chamberlain Waits.