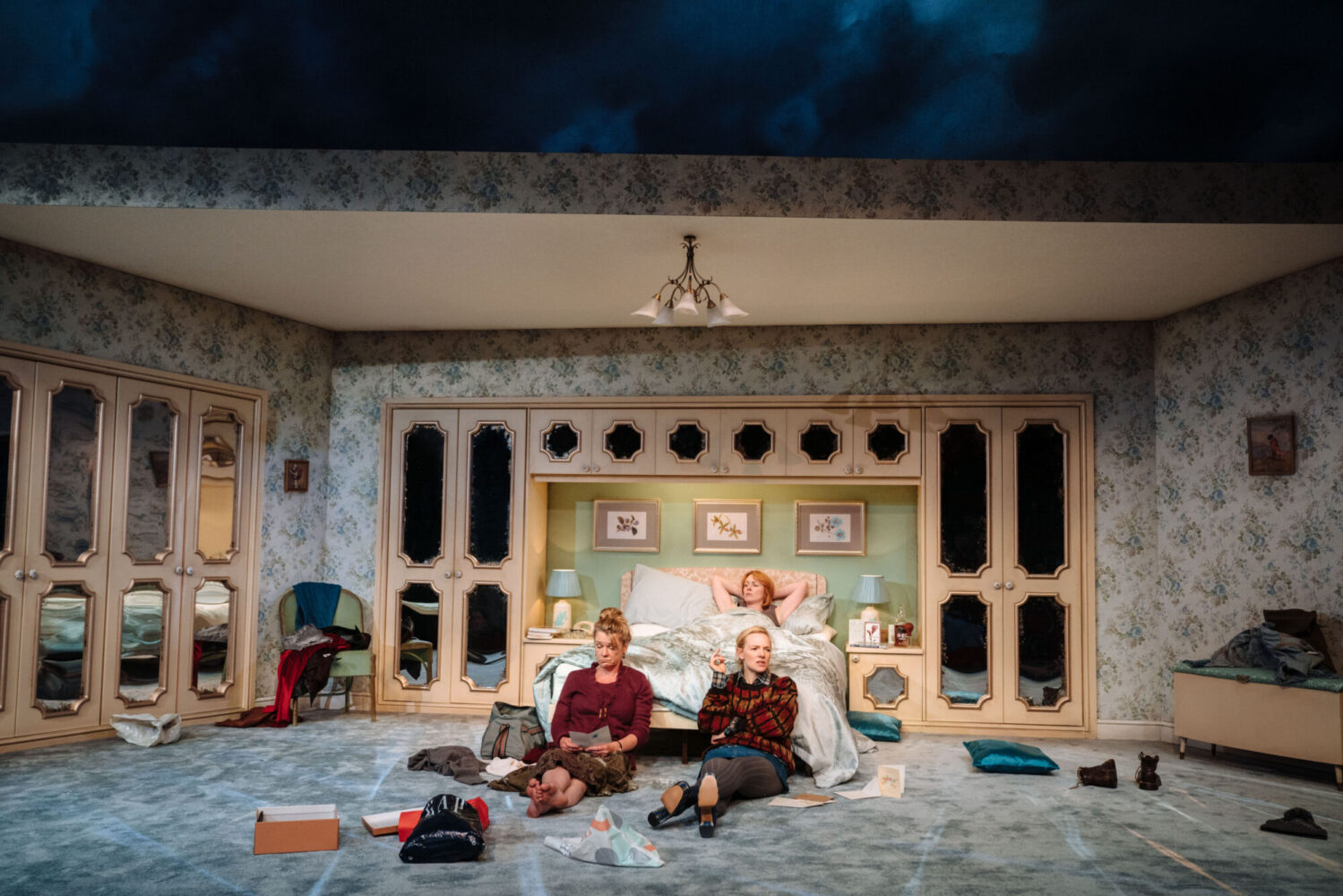 Phil Ross attends the press night for Shelagh Stephenson’s play The Memory of Water at The Hampstead Theatre and reports back.

First up, I have to confess that I’ve just appeared as Frank in Shelagh Stephenson’s The Memory of Water at the South London Theatre – so I’m genuinely excited at the prospect of seeing the play. One of the lovely people from the Hampstead Theatre came to see our production and kindly extended an invitation to the cast and crew to the press show. After the agony of the audition, the ecstasy of acceptance and the sobering realisation that there were an awful lot of lines to learn – rehearsals began during quite strict covid measures, so everything, even the snogging scenes were conducted wearing a full-face plastic visor. And if one of us had caught Covid in the run-up, then the play would have been cancelled. But the government relaxed the rules, it went ahead and after a hugely enjoyable five night run, I was left feeling deflated, in fact as flat as a pancake and just a little battered. So of course, I was delighted to accept the invitation tonight.

The Memory of Water was first staged at the Hampstead Theatre in 1996. It won the Laurence Olivier Award for Best New Comedy in 2000, and the current run is part of the ‘Hampstead Theatre Originals’ series. The story revolves around three fractious sisters on the eve of their mother Vi’s funeral. The women share different recollections often of the same events and are unable to agree on what is the truth. They are, however, united in criticism of their deceased parents, in particular problems that arose from their lack of sex education from Vi, and their father’s emotional detachment. Fuelled by whisky and drugs, secrets, shenanigans and hidden feelings are exposed often in the most raw and uncomfortable manner, not just between the sisters but also excruciatingly between them and their partners. This may read like a tragedy but gravitas is garnished with a cornucopia of glorious gags and magnificently crafted humour – it’s a wonderful comedy rollercoaster, repeatedly plunging into the depths of our comfort zone before rising effortlessly rising again for more laughs. 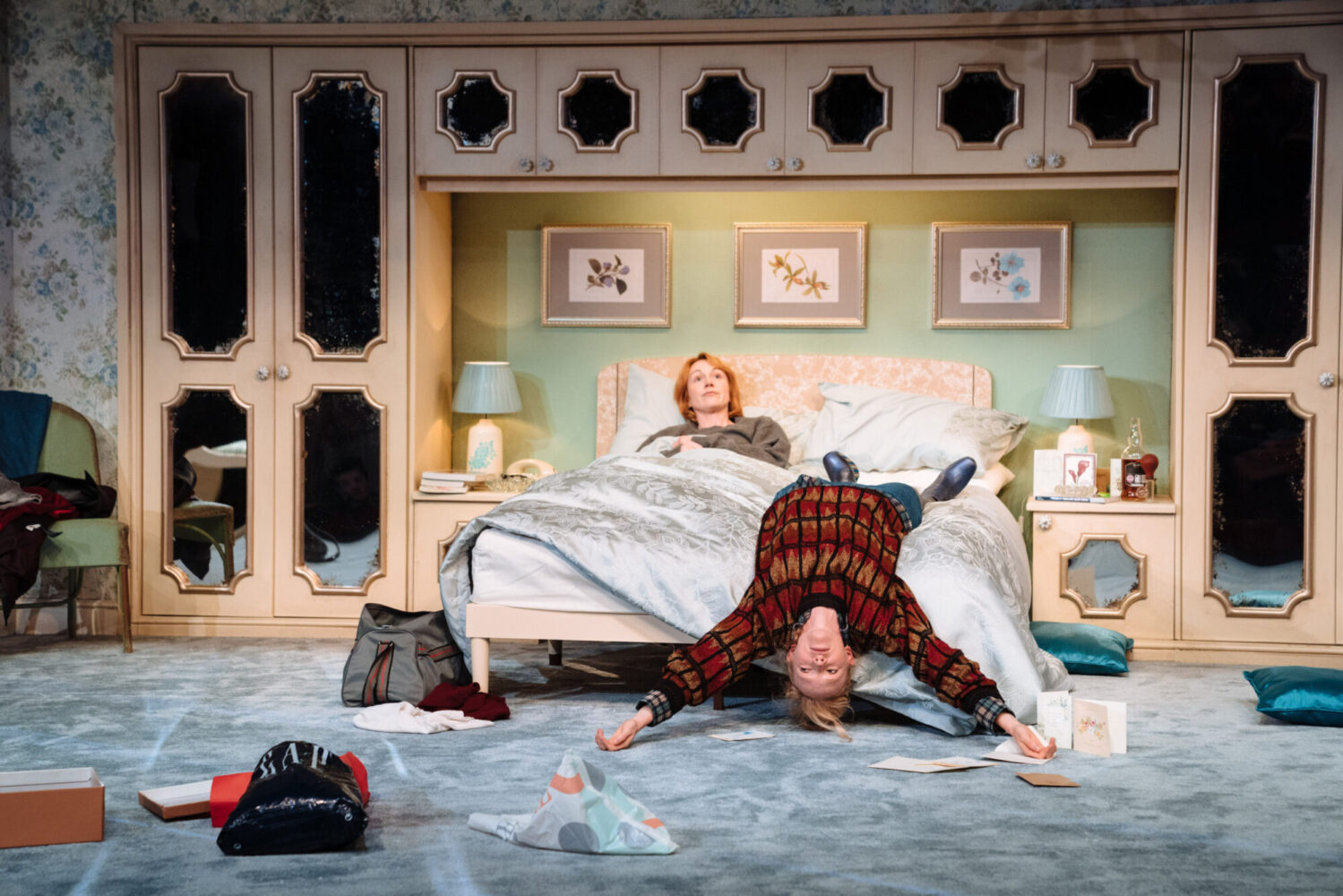 The cast tonight is very strong all round, with the heavy lifting of course done by the women from the outset. Laura Roger’s Mary pivots seamlessly between the ghostly interactions with her deceased mother, the demands of elder sister Teresa and disappointment with her non-committal boyfriend Mike the married man. I could almost ‘taste the bile’ in Lizzy McInnerny’s tongue lashing as she built Vi towards her final tear-jerking scene with Mary. Lucy Black’s drunken and fluid Teresa shone wonderfully with bitterness – her biting ‘Mary this, Mary that’ speech spitting out a heady cocktail of grief, alcohol and animosity. Grief is one of several themes of the play, which takes place entirely in deceased Vi’s beautiful boudoir, complete with full length mirrored wardrobes. (A big shout goes out to set designer Anna Reid). 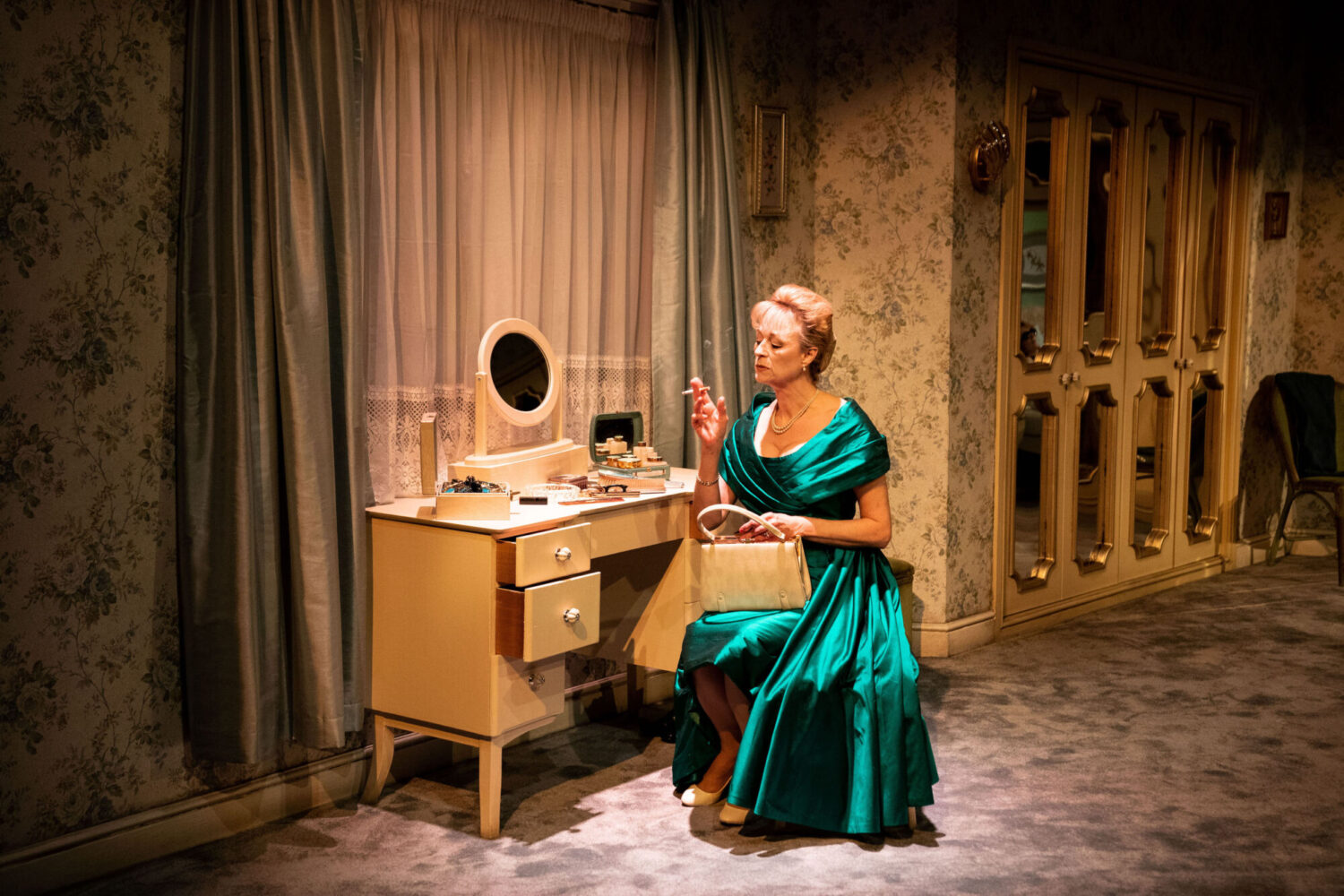 Adam James’ entrance as Mike through the bedroom window was a ridiculous, little nugget of comedy gold and whether or not he meant to knock those things off the dressing table – he picked himself up, reassembling the items with the poise of someone who had awkwardly climbed through a bedroom window. Coincidentally, a few nights previously I had watched James play Lieutenant Commander Prentice on the BBC submarine drama Vigil, and was struck by how convincing I found him as a naval officer and my immediate dislike for the character – the sign of a good actor I thought. Tonight his character Mike, a married man and father in the midst of a five year affair with Mary is equally convincing – his facial expressions, timing and physical comedy are splendid. And it’s this character, Mike, that Stephenson uses to introduce a subtle and thematic dig at the patriarchy.

The bulk of the themes are conveyed through the words and experiences of the women, but there’s one interesting conversation where Mike is telling Mary he doesn’t want to have a child with her. He explains that he’s not paternal and that’s ‘not a crime’, telling her he has had a vasectomy saying: “If you’re a woman and you take care of your own fertility, nobody argues. Well, I’ve taken care of mine”. Having just worked with the play for over eight weeks, I’ve seen this particular monologue elicit a huge range of responses and yes, while I’m often accused of over-thinking things – it occurs to me that perhaps Stephenson is using the male character to tell us that birth control isn’t just down to women and that men should take responsibility too.

The dilemma we are faced with when watching, reading or working with The Memory of Water is that there are simply too many riches, it’s a treasure trove of fun and sorrow, poignancy and pleasure and many other things in equal measure. There are so many discoveries to be made as an actor or an audience member, I could happily watch Alice Hamilton’s beautiful production over and over again. Having just played Frank, it wouldn’t be right for me to comment on Kulvinder Ghir’s portrayal – his physical and facial comedy is excellent, he’s thoroughly watchable and very funny. But personally, I want to see that Frank and Teresa are a married couple – who either love each other, hate each other or whatever they decide. There’s a danger of them existing in solipsistic worlds on the same stage. That’s no criticism of the actors or director, just my personal two pence.

On the night I attended, the star of the show for me was Carolina Main’s Catherine. As the youngest and least responsible sister, she cavorted and contorted around the stage, often getting the biggest responses and reminding me in places of Jane Horrocks’ Absolutely Fabulous Bubbles character. The audience loved her and she clearly enjoyed herself, momentarily breaking the fourth wall with a big grin as she waited for the laughter to die down. The night before their mother’s funeral, Catherine who is unable to maintain a relationship hovers desperately around the telephone waiting for Pepe, her current lover to call. When he does, tragically it is to end their relationship which leads to (possibly) the longest monologue of the play where a distraught and emotional Catherine lays bare her soul. It’s always a marvel to witness an actor release the inner demons and with Main’s subtle switches of intonation and nuanced expression – it was a masterclass.

The unmissable Memory of Water is on at The Hampstead Theatre until 16th October 2021. Go here to book the tickets for the show.

Photography by Helen Murray
All words by Phil Ross. More writing by Phil can be found at his Louder Than War author’s archive.