Home Music The Membranes team up with the Quietus website and Yossarians, Arabrot for... 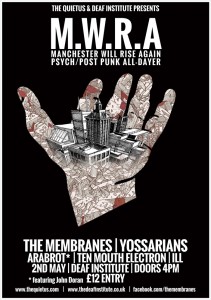 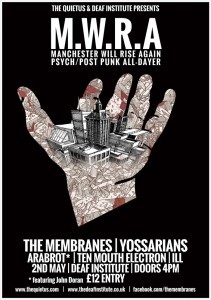 The Membranes team up with the Quietus website and Yossarians, Arabrot for special Manchester gig

Tickets also from the Louder than War shop here

At The Deaf Institute, Manchester; Sat 2nd May 2015

On Saturday May 2, Manchester post punk legends, the Membranes will be playing their upcoming new album Dark Matter/Dark Energy live when they headline the M.W.R.A. all-day festival at Deaf Institute. This new album is punk psych trip that explains the life, the universe, death and existence itself. In less than 90 minutes. With power chords. Their new sound weaves noise, drone, found percussion, feedback, discord, melody, free jazz, dub, punk, classical and avant metal into one unique big bang of an evening.

John Doran, a Lancashire born writer and editor of the Quietus website, explains why he has put the event together.

Since he figured it was high time he was having a mid-life crisis; the author and journalist has decided he might as well do the fucking thing in style. Doran, the editor of the Quietus website, writer for VICE and the Guardian as well as occasional broadcaster for the BBC and Noisey has a book called Jolly Lad coming out this May on Strange Attractor press concerning his recovery from alcoholism, the joy of fatherhood, repairing the damage done by decades of habitual drug use, coping with mental illness and obsessive behaviour – especially regarding music and art. And this is being released with a spoken word album featuring musicians from Manic Street Preachers, British Sea Power, Factory Floor, Grumbling Fur, Eccentronic Research Council, Teeth Of The Sea, Perc and more.

And not only that but for the whole of May he is undertaking a 31 date reading tour of England playing to captive audiences along the way. Literally captive, in the case of the three high security prisons he’s doing shows in. Other venues include churches, WW2 bunkers, record stores, bookshops, warehouses, libraries, theatres and cinemas. But things really kick off in style in Manchester on Saturday May 2nd, when he is joining esoteric Norwegian noise rock band Arabrot, local performance artist Louise Woodcock, Neil Francis (GNOD, Terminal Cheesecake) and Jay Tea (Locean, Ten Mouth Electron) for a set that will be a mix of spoken word and chaotic industrial psychedelia – covering the themes of the haunted bus routes of Manchester, the art of self-tattooing, the death of Margaret Thatcher and the ritual slaughter of Dapper Laughs.

He says: “It’s an absolute honour to be sharing the stage with one of the finest post-post-punk bands of all time, The mighty Membranes, not to mention the cream of Greater Manchester’s dark psych underground… M.W.R.A: Manchester Will Rise Again. And it will start at the Deaf Institute on May 2nd.”