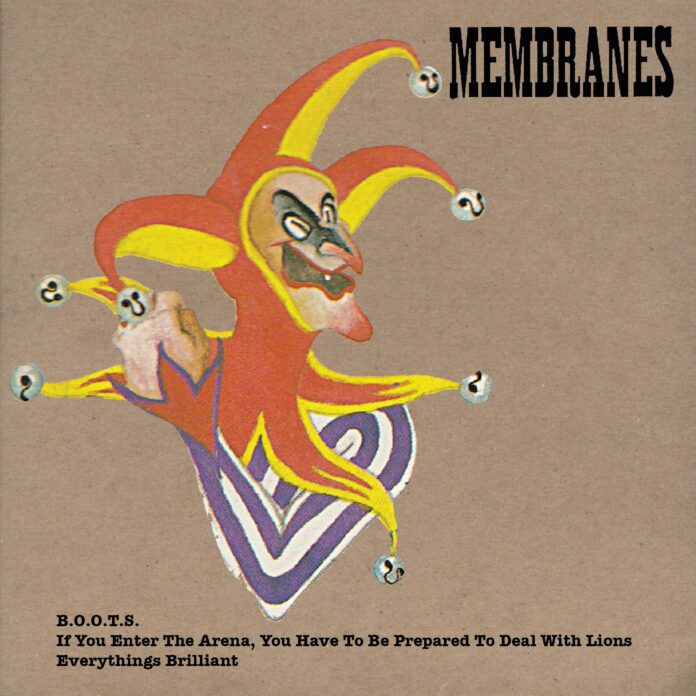 For record store day, Louder Than War Records will be celebrating the return of the legendary post punk band the Membranesby releasinga limited triple AAA-side, which marks their first release in 22 years and they are sounding as edgy as ever.

Formed in 1977 in Blackpool by frontman John Robb and a collection of dislocated 15 year olds the Membranes were inspired by punk, they played their first gigs before they had learned any chords and how to tune their guitars. They turned this into a fine art into what would be termed post-punk over a series of critically acclaimed releases in the eighties that saw them tour the world with their out of control live shows and discordant wild records.

Their touring took them all over the world from touring Iron Curtain Eastern Europe, endless criss crossings of America where they were a recognized precursor to the late eighties American noisenik bands like Big Black (Steve Albini is a big fan) and they were signed to Homestead Records and their support bands included Afghan Whigs, Pussy Galore, White Zombie and back in the UK My Bloody Valentine, Wedding Present, Pop Will Eat Itself and many others.Their manic energy and imagination was an influence on a whole scene of eighties underground bands that frontman John Robb recently wrote about in the Death To Trad Rock book. They were signed to Creation Records for an album, had a top 5 in the John Peel festive 50 and had the heaviest bass sound ever, their gigs were wild mosh pits and full of confetti that saw them out n the PA blacklist and having to pay the cleaners extra money after each show.

The Membranes was not just a band but a collective of artists, musicians and pranksters ”â€œ the Membranes collective which included Simon Clegg who was responsible or the band’s distinctive artwork and Ian Tilton, brother of original guitar player Mark and current top music photographer.

This single is the first release from the band since 1990 and follows their really successful appearance at ATP festival where they were asked to play by another former support band My Bloody Valentine. The three track single, remarkably, is the Membranes at their manic best that goes from the dark ”ËœIf You Enter The Arena You Got To Be Prepared To Deal With The Lions’ to the electric shock garage rush of ”ËœB.O.O.T.S.’ to the melodic, euphoric with a melancholic twist of ”ËœEverything’s Brilliant’.

The band will be playing festivals over the summer across Europe, the USA and Brazil and an album is planned for the autumn.

B.O.O.T.S is a cover of the band’s own ”ËœFuck My Old Boots’ ”â€œ the song bizarrely mentioned in the court case last year by PC Mark Saunders the police firearms officer who was removed from firearms duty after allegedly inserting song titles into his oral evidence at the coroner’s inquest. An examination of his transcript contained a number of phrases which are also the titles of songs, including ”ËœEnough Is Enough’ by Donna Summer, ”ËœPoint of No Return’ by Buzzcocks, ”ËœLine of Fire’ by Journey, ”ËœQuiet Moments’ by Chris de Burgh, ”ËœKicking Myself’ by As Tall As Lions and”Â¦’Fuck My Old Boots’ by the Membranes.