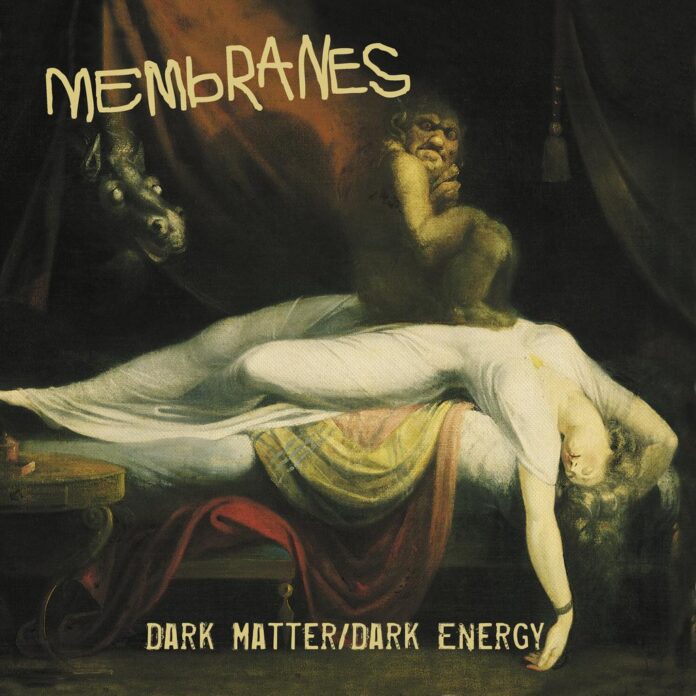 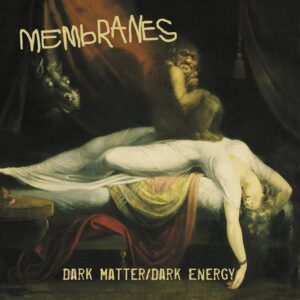 Twenty six years after their last studio album The Membranes will be releasing its eagerly anticipated (since it was announced anyway) follow-up in three weeks. Long time fan of the legendary UK post punk underground band Ged Babey’s spent the last few weeks with Dark Matter/Dark Energy and here he passes on his thoughts about an album many are touting as the band’s career defining magnum opus.

The first words sung on this album are ‘I didn’t ask to be born’. And the last line starts  ‘Ashes to ashes, dust to dust…’ And in between there is a body of music about Life, Death, the Universe and Everything. This album tries to encapsulate it all, in song, and music.

It can’t possibly succeed, but seeing as it’s John Robb at the helm, it’ll give it a damn good try. It’s breadth and ambition are unmatched by any band from the UK.

This is a magnificent, sprawling, varied, epic album. It’s a personal best. An album which, in that old-fashioned way, is a complete whole, and needs to be heard from start to finish, in one sitting.

Of course afterwards you can isolate your favourite tracks and stick them in a playlist with the very best of the Swans, Joy Division, Nick  Cave, Shellac, Rollins Band and Hawkwind and you’ll enjoy them just as much.

This is, I have to warn you, NOT a rock’n’roll album. Nor a post-punk one.  It has sections of near classical music and some tracks feature a vocoder disguising John Robbs voice. One track, maybe two, could well be Goldblade, but it is a wide and varied selection of sounds. From noise to tranquility, from desert rock groove to complete noise abandon. A multitude of voices, from a CERN organisation scientist to John Robb’s late dad. From whispers to screams. Drones to gothic dub to jagged guitar scree. It’s bass-driven, but also features violins and melodica.

This is not an album full of maudlin self-pity though. It’s an all or nothing exploration of now, the past and the future and the meaninglessness of humanity considering the scale of the universe…? I don’t know – but it is a magnificent suite of music.

It’s a world away from the Tatty Seaside Town punk of decades back and the noisenik waywardness of the 80’s.

The difficulty with reviewing this album is separating the man from the art.  We all ‘know’ John Robb as a writer and evangelist for great music(s). His purple prose is what this website is built upon. We know his feelings about Shellac, The Stranglers, Einstürzende Neubauten, Swans, Adam Ant, the Roses and hundreds of other bands who, as we know from his writing, he genuinely loves. We think that we know his favourites, his canon of greatness -Albini-Stranglers-Bauhaus-Ants-Roses and consequently those are gonna be the cornerstone influences of the music he makes, although some of the bands in question have credited the early-period Membranes as being an influence on them.

No one seems to have noticed that the album’s title is a subtle play on the Velvet Undergrounds White Light/ White Heat.  Or that the cover art similarities to Closer, only with a demonic ape-creature uglifying the beauty.

John Robb’s muscular playing and seismic basslines are at the heart of the album but the guitar playing is exceptional in terms of sounds and kinetic energy. The drums and percussion are deliriously primal.

When John Robb calls himself ‘the boss at Louder Than War’ it’s pretty tongue in cheek. He pays for everything and the writers have a free reign to write what they want. He doesn’t edit or restrict or tell us what to do at all.  Consequently, if we wanted to tell the world this was an appalling album, he’d probably let us, if we could justify the claim. Luckily though, it’s not.  It is probably the pinnacle of his work as a musician and songwriter. It’s an epic, genre-straddling monster of ferocious noise and drones and whispers.

As it says in the Press Release, which I can’t better …

“The new Membranes have stretched their sound from noise to neo-classical, from drones to jagged riffs to hypnotic grooves perfecting a new way transforming the grotesque into grandeur, making beautiful music and hypnotic noise. Dark Matter/Dark Energy conjures up primal forms of power that lie in noise rock and the most melancholic of classical music.