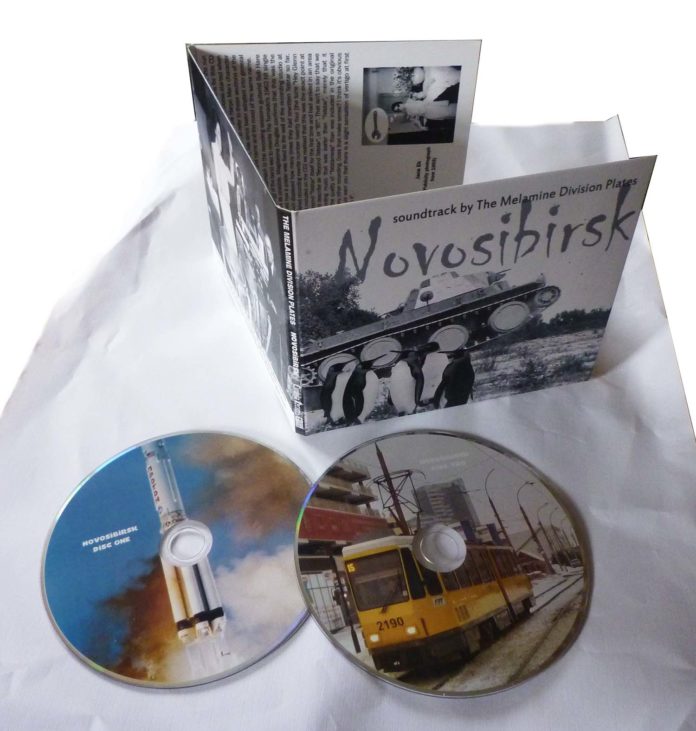 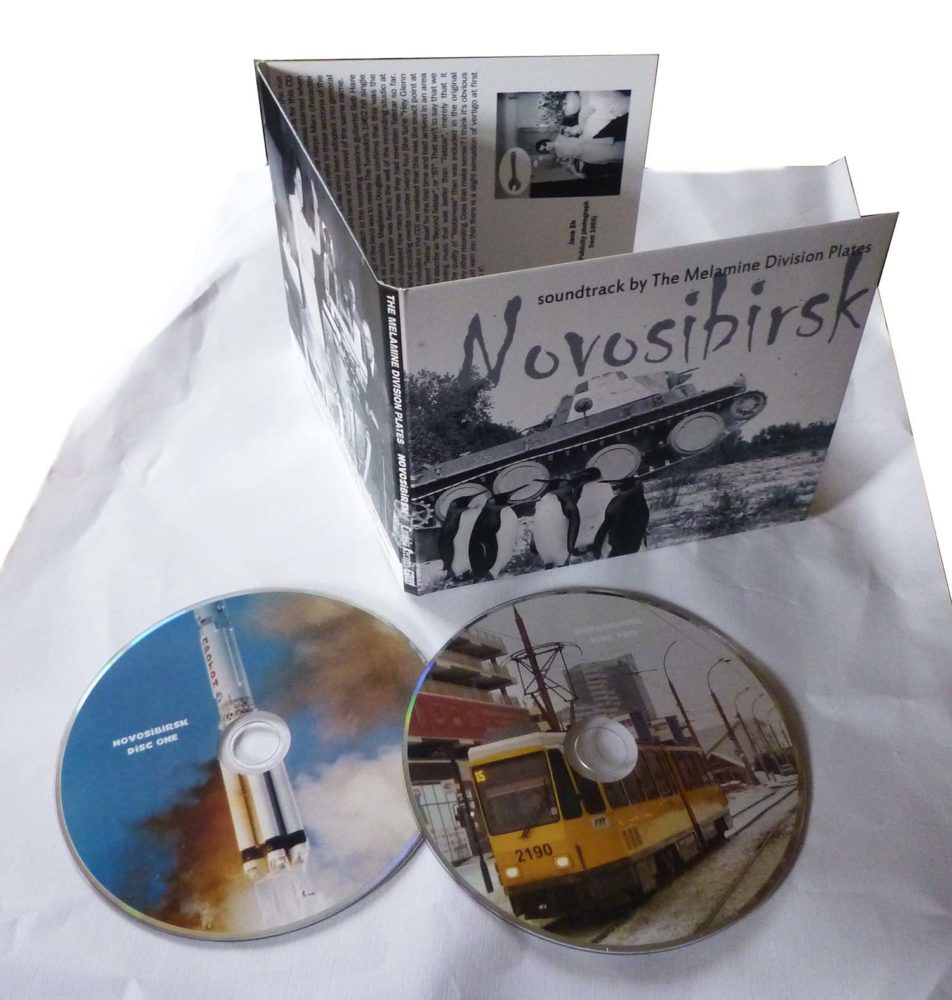 A new soundtrack to Jane Ek’s celebrated 1964 play Novosibirsk, recorded by Experimental Surf Music band the Melamine Division Plates for a 2016 production of the drama in Peterborough….or is it? LTW’s Ian Canty investigates the twilight world of the Plates……….

On the first look, it seems just about plausible. After all, if the Times could record the music for a stage play of Joe Orton’s Up Against It, why couldn’t the Melamine Division Plates soundtrack one too? According to the accompanying text, Jane Ek’s play Novosibirsk was first performed in Moscow in 1964, to much critical acclaim in the USSR. A recent revival resulted in the Melamine Division Plates being asked to provide suitable musical stylings to Novosibirsk.

Here’s the general gist of the tale. Joseph Stalin himself comes to spearhead an investigation into missing penguins at Novosibirsk city zoo. These penguins were removed for their own safety by zoo keeper Anton, who after the threat recedes is unsure what to do next. Anton’s increasingly desperate bid to keep a lid on the penguin situation seems to be the focus for the fun.

It is remarked in the sleeve note that the play shares something with The Government Inspector by Nikolai Gogol and many odd plot devices are used, including detailed references to Soviet military hardware. Also a fictional version of Harpo Marx (someone well know for not speaking in his films – draw your own conclusion on this one, but I’m pretty sure what it means!) appears in the role of Stalin’s conscience.

In 2016 the play was revived and this is where the Melamine Division Plates come in. Legal action from the Marx Brothers’ estate meant that Harpo’s role was expunged and the Plates were asked to just play louder when he was supposed to talk. That this new production was based at the Tobe Hooper Theatre in Peterborough should have the more cynical of you beginning to doubt the veracity of all this. But in a way it doesn’t matter – it certainly is an intriguing enough notion to be immortalised on stage and that is the point.

There is also the music to be taken into account, more accurately described as Experimental Surf Music (ESM). Conjure in your mind if you will a parallel universe where the Shadows accidentally invent Psychedelia in 1962. While Hank B and the boys went to blast off into the stratosphere, that herbert Cliff was surplus to requirements and is despatched back to Soho with only his bongos for company.

Joe Meek is furious at being gazumped by the Shads and orders the Tornados straight back into the studio, demanding that they record something far weirder than Telstar, before menacingly adding “or else” (n.b. the sleeve note has the Plates admitting that to begin with Novosibirsk was musically several attempts to rewrite Telstar). Across the Atlantic the Ventures start getting reports of this strange activity on the other side of the pond and want in, adding an extra veneer of psycho-mania to their instro surf rock efforts.

Meanwhile in Sweden the newly-formed Spotnicks have been readying material for their first release, but completely change tack on hearing the influx of odd new music detailed above. They adorn their tunes with a few Russian motifs and Psych touches, in addition to their customary guitar twanging. With a name like the Spotnicks, why not? The resulting noise that these space-suited nutcases could have come out with in this other world may have had a very slight of a resemblance to the sound of rendered on Novosibirsk.

Helping out the Melamine Division Plates on this record are members of the Novosibirsk Spontaneous Background Music Ensemble and the band is listed as Bob Hare, Sebastian Rice, Magdalena Douglas (who also provides some context of the Peterborough production in the sleeve note) and Ron Explosion. Extra drums come from Mat Bartram. But it’s not too hard to detect that Alan Jenkins, Cordelia head honcho, may have had a fairly hefty hand in proceedings. Through his work with the Deep Freeze Mice etc he developed a highly individual knack for strange storytelling, whilst not forgetting to be hugely entertaining at the same time. Novosibirsk displays both of these hallmarks and combines them within a mostly cheery but intermittently ominous musical context.

In a way it is a bit of a waste of time to pick out highlights on something that is such a complete piece and zips through with a total élan from beginning to end. But some analysis is necessary. Sometimes the MDPs play it relatively straight, replicating that twanging guitar style of the late 50s/early 60s perfectly. However there is always something else happening in the background. Found sound, drones, chatter and speeches, pops, cracks, whiplashes, all of these ambient noises cut in from time to time. They don’t detract from the relentless beat and manic energy, adding instead an extra layer which entranced me for one. Also the song titles give some idea of narrative thrust of the (fictional) piece, whilst leaving plenty to the imagination.

N.B. the above vid is not on the album, but a brain-shaking meditation on the Beach Boys classic nonetheless

On the first disc The Morozovo Meteorite welcomes us with a cool “Spy Theme” style and the following track Reindeer Herders has a bewitching slow and dream-like pace. This one evokes a real atmosphere with a exquisitely sweet organ line that the Tornados would have killed for. In Space Together, Conquerors Of The Sky jams in some rough feedback and has more of a Psych feel, but is still warm and sultry and is followed by a great piece of speedy Shads-beat in Weasels In Space.

The brief Dzerzhinets (Imagine No Possession) is scratchy and fast, all drums rumbling and then a spacey stop-start (something which is a feature of a few tracks here). Something that sounds oddly like a fishing rod being wound in adds to Gone To Bitki, Back In A Minute’s dotty charm.

Moving onto disc two the titles still give a vague idea of the story’s progression, but the beat goes on regardless. Colonel, Look At The Ants is shot through with Psychedelic drones and whistles while Infrastruktura has a little of Link Wray’s Rumble in its guitar intro. 33% Chinese is rough and near-Punky, a great chunky guitar tune and Proton-K is another cool spy theme-type thing.

Things get weird on Lenin Crossing The Delaware As a Child, where a manic twist tune breaks down and stops to just chatter and random tambourine bashes, starts twisting again with more organ, stops and then some horn sounds flood in. Tatra KT4DM is equipped with a huge stomping near-Glam beat and the bass leads this offering for once. Final track Day Of Remembrance Of The Victims Of Political Repressions spaces one out with spoken word and music blasting back and forth, with a warm organ sounding humming in to sweeten the deal. Quite a trip, all things considered.

Put simply Novosibirsk is a delicious novelty, an inventive and imaginative brain-twister a long way off the standard album and all the better for it. It also helps that it has a great deal of well handy music onboard and the playing is adventurous and strange as the storyline. Embroil yourself in in the mad vision of Novosibirsk, you may not come out of it quite the same but you will be enriched by the experience.

It’s a weirdo non-stop beach party in the sub-zero temperatures of chilly Siberia, a rockin’ clambake taking place in a cosmically and comically altered version of the old Soviet Union. Quiffs and beehives will melt under its crazed sonic attack and twisters’ knee joints will creak. Now all we need is someone to write the play for real, or Jane Ek to come out of hiding/retirement and show us how it’s really done….