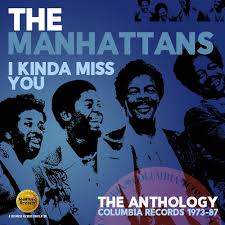 The Manhattans – I Kinda Miss You

Overview of the prime hit-making years of New Jersey Soul Titans the Manhattans, featuring all of their hits in that timeframe and key album tracks. LTW’s Ian Canty looks at the time when it seemed like the entire world caught the Soul Train…………..

Though actively recording from the middle of the 1960s onwards, Jersey City’s very own Manhattans came into their own during the 1970s, scoring big hits and success across the globe. In the classic vocal group tradition of the likes of the Four Tops and the Temptations, they found themselves with the perfect crossover sound for the new decade, climaxing in the massive worldwide hit “Kiss And Say Goodbye” in 1976 (this compilation is named after the actually very good but nowhere near as successful follow up “I Kinda Miss You”).

It’s a shame that a collection like this probably will receive the standard 25 word review in the glossies – yes I know that money talks and they need the space for two page in-depth delving into the latest Big Name waxings, that is what “sells” – but the Manhattans, like a lot of bands written off in this harsh way, do deserve more consideration. Throughout their hugely successful 70s heyday (documented here), they single-mindedly followed their chosen path without much compromise to the prevailing trends. Painstakingly crafting the Soul ballads that were always their raison d’être, they enjoyed a twenty year plus period of hits on the coveted US R’n’B charts from 1965 to 1990.

As you might suspect, the vocals here are of the very top quality, set opener “There’s No Me Without You” being the kind of creamy Soul ballad that was a hallmark of the band’s success. It is easy to parody (as has been done often), but sometimes this is just the most beautiful sound to hear. It has the feel of good times, comfort and love and what on earth could be wrong with that? Having said that to get the best out of this collection you are going to have to be a fan of this kind of thing in the first place, because there are plenty in that mode here. The Manhattans were masters in this field and everything presented here is without fail beautifully sung and arranged, but this comp one could present some difficulty for anyone with a low tolerance level for 70s Soul love songs. Sometimes, even someone like myself who like this kind of stuff, wish that they would “go for it” a bit more, but that isn’t the Manhattans way.

Of course they didn’t solely record ballads and the faster numbers show they could fill a dancefloor along with the best of them. Though they could definitely compete with most acts in upbeat dance numbers, on the whole they shunned anything much quicker than mid-pace. It does need to be noted that unlike many bands that came through the same R’n’B/Soul route, they more or less refused to follow the Disco route, perhaps they knowing their strengths? Or was it the pride they took in their 60s-steeped Soul approach, not just throw that all away following the latest big trend? Anyway the proof of their aptitude when the rhythm got faster is represented here too, with non-album b-side “Gypsy Man”, a “Shaft” style explosive (for them!) dancer which employs the deep voice of bass vocalist “Blue” Lovett to good effect and “Summertime In The City” a good effort at authentic “socially conscious” Funk. “That’s How Much I Love You” also chimes in nicely with the lush “Philly Sound” that was all the rage at the time.

But the vast majority of disc one is given over to the slowies that gave them their big hits, with “There’s No Good In Goodbye” being a neat look back to their Doo Wop roots and “Everybody Has A Dream” having Blues at its heart with some classy guitar figures to keep it interesting. I admitted earlier that I yearned for them to play something faster at times but you can’t deny their craft. Blow me down though if Blue Lovett doesn’t pop up in the middle of the smooth “Here Comes The Hurt Again” like a potty-mouthed Soul Steve Jones and blow things out of the water! If he called you for bullshit you better believe it, tea exited my nose that that point!

The second disc here collects their work in the 80s, as the Disco boom faded and the Soul values that the Manhattans prized above all else came back into favour, along with the more faddy electronic tricks and sounds. There are the unavoidable moves towards the kind of production techniques that were rife during that decade (on the duet with B.J. Nelson “Don’t Say Know” where the backing track resembles the Style Council’s “Long Hot Summer” a tad), but for the most part the Manhattans continued to hone their craft. As a contrast there’s the pleasing Electro-Funk of “Crazy” and some nice jazzy touches on “Just The Lonely Talking” and “Where Did We Go Wrong?”, a collaboration with Regina Belle. “Honey Honey” goes right back to their roots, a stunning old style Soul ballad and the Funky Synth-assisted “All I Need” showed that they could move with the times, if they wished to.

Sadly the last member of the original line up, Kenneth “Wally” Kelly, passed away in February 2015, but the group live on through their much loved recordings and the key ones are all featured here. This collection, with an informative sleeve-notes from Charles Waring, proves the Manhattans admirably stuck to their guns and worked tirelessly to write and perform the perfect Soul ballad. From the evidence provided here, they succeeded more than a few times.