Keith Goldhanger wandered into the Bad Vibrations all day event to catch headliners The Magic Gang (not for the first time), Treeboy & Arc (again), Happyness (again, but not for years) Lazarus Kane (again) and PVA (never before).

The Boston Arms in North London boasts two venues on top of each other and is the ideal location for these all-day events that various organisations have utilised recently to put on shows for the music loving-public who enjoy running up and downstairs for hours on end watching non-stop gigs until its time for bed.

Today’s event, arranged by Bad Vibrations has us grabbing our Oyster Cards (once the final whistles around the country are blown) and although we miss the first couple of hours we do manage to see enough to proclaim this a day when many people get to see a few new (ish) bands they wouldn’t normally have stood in the same room as. Something many of us really like to encourage.

By the time The Magic Gang arrive at the end of the evening the room is full. It’s a young crowd and a gathering of people who we like to think will wake up the following morning tired, worn out and curiously tempted to blast out TREEBOY & ARC, cure the hangover with any of the vast amount of tunes available at our fingertips by the glorious HAPPYNESS, get their diaries out to check for for the next brilliant band that LAZARUS KANE are going to be supporting or like ourselves, start to look for some PVA tunes that still don’t seem to exist inside our laptops yet.

PVA are playing anything from nosebleed techno to dark electronic, experimental, atmospheric, industrial music all within any one individual song. It’s obviously still early days for this trio and it feels as though we’re standing in on a rehearsal, but that won’t deter some of us from knocking on doors to find out more once they do eventually release something for us to listen to at home.

LAZARUS KANE still have us searching for something positive to report. I suppose the Carnaby Street flame T-shirt that one of them seems to have worn every other time we’ve seen them isn’t there today and we observe that that bloke who usually roams around the stage playing the tambourine is also absent (is it a different keyboard player too?). The one tune they do have available has been listened to dozens of times now: we’ve seen them half a dozen times recently now, we’re fed up with people asking us if the voice is that of a real American or faked and … there is no ‘and’ (well there is but we’ve gone on too much already). Once they produce something of our liking that gets our blood pumping (and we genuinely hope they will one day) then there’s a thousand words already sitting on a sheet of paper noting the things we don’t like about them in 2019 to put alongside all the reasons why we may love them in, say, 2025 or maybe 2020? Some of us are still happy to hang around and monitor this one.

HAPPYNESS are fucking ace. It’s been a while since we’ve crossed paths and the trio we once knew and have always loved have since lost a member, gained three others and Ash the drummer is probably the first drag artist to perform in an alt-rock band that raises the eyebrows for those of us who haven’t been paying attention recently. We get an airing of the beautiful Weird Little Birthday Girl alongside half an hour of restrained, eye watering loveliness that can only be described as fucking beautiful. At times Jonny had two others singing along with him, it’s gorgeous and a whole day of catching up with their music follows whilst more visits to see this band are being researched as we write.

Seeing a band such as TREEBOY & ARC (main pic) playing music such as this in 2019 without the sound of an Irish accent anywhere makes a nice change. 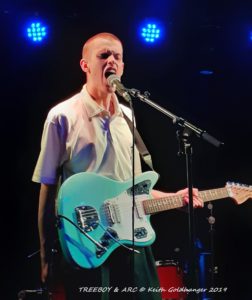 This Leeds band are going from strength to strength, and although it appears that the majority of the attendees are quietly sloping off one by one up the stairs to catch The Magic Gang (no idea why, there was plenty of time), those paying attention are witnessing some furious, energetic, tightly
-controlled post-punk that is very well constructed and very well received by those of us happy to tap our feet and shake our legs until they hurt.

The main room is ready for The Magic Gang to play us their radio-friendly indie pop tunes as soon as the flight of stairs has been conquered again. Three quarters of the audience seem to be singing and clapping along to every catchy chorus this band have ever written. Even when they throw us some new tunes, the pace or attention doesn’t waver amongst those still standing. It’s the three-part harmonies (it maybe four or five but we were at the back behind some very tall people with their girlfriends on their shoulders) that make us smile, make us remember all the good things about pop music and make us wonder if these people here today will be just as enthusiastic about all the other bands on display during the day when they get home.

We imagine they will be, which is surely the whole point of spending a day in a couple of dark rooms running up and down a flight of stairs every forty five minutes.

Words & photo by Keith Goldhanger. More writing by Keith on Louder Than War can be found at his author’s archive. You can also find Keith on Facebook and Twitter (@HIDEOUSWHEELINV).