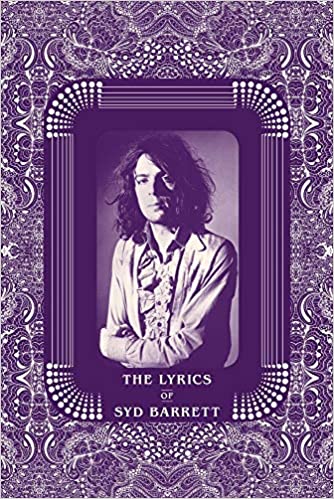 Syd Barrett founded Pink Floyd but stayed in the band for only three short years. In that limited time, and in the solitary period that followed, Barrett produced a kaleidoscopic set of songs memorialized in this new book from biographer Rob Chapman. In The Lyrics of Syd Barrett, readers get a complete set of lyrics produced by the musician and presented in poetic form—a total of 52 songs—along with photographs and reproductions of Barrett’s artwork.

Chapman’s introduction to The Lyrics of Syd Barrett reads like a work of literary criticism tailored for a broad audience, offering analysis of Barrett’s language while highlighting the ways in which the musician’s words offer interdisciplinary forms of engagement. It should captivate a range of readers from Pink Floyd fans to scholars of lyric poetry. Wouldn’t it be fantastic to see this kind of public humanities engagement more often? Truly it would. Chapman highlights Barrett’s interest in assemblage methodologies, pointing out how, in songs like Octopus, he “utilises an art school approach to found materials in his borrowings.” Chapman points the reader to an anthology of canonical poetry, largely from the nineteenth century, from which Barrett gathered words and phrases for his songs. Yet Chapman isn’t the only one to point out Barrett’s interest in “borrowed” materials from other texts and forms. In the foreword to the book, former Pink Floyd manager Peter Jenner describes Barrett as “a collector” who developed ephemeral archives of images and language that ultimately made their way into his songs. That cross-disciplinary approach to writing song lyrics reveals how Barrett “got multimedia before it had been invented,” Jenner suggests.

Beyond analysis of Barrett’s methodologies, Chapman also illumines the aurality of Barrett’s language. Insisting on a need to read the lyrics aloud, Chapman invites us to engage in a kind of performance of the lyrics to appreciate them on an aesthetic level. In Barrett’s writing, Chapman explains, “assonance was often deployed for the sheer love of sound”—a notion that would be nearly impossible to realize without hearing the words on the page. And there’s also something inherently visual about the lyrics. As a person who “began and ended his life as a painter,” Chapman affirms, Barrett “painted magnificently in sound and song.”

Visual art appears throughout the text, pairing Barrett’s lyrics with images of his paintings and drawings. Like his words, Barrett’s artworks range from still-life sketches to abstract textured paintings, including a strange and delightful self-portrait from around 1961. These pieces are complemented with various colour and black-and-white photographs of Barrett and Pink Floyd. Often paired with a particular set of song lyrics, the photos invite the reader to make a connection between the image and language on the page. For instance, a full-page, black-and-white photograph depicts Barrett in 1969 at his home in London wearing only leather pants and arching his back in such a way that he transforms into a sculptural object in the room. The long-shot is entitled, simply, “Practising yoga at home.” The picture stands alongside the lyrics to Milky Way, as Barrett’s physical presence speaks to a directive of the song:

Given that each set of lyrics is a page unto itself, many of the songs—particularly the ones that are more lyrically brief—present the reader with a pronounced negative space in which to imagine accompanying forms. Dark Globe, in particular, seems to implore the reader to visualize an image on the blank space below Barrett’s own beseeching words:

Certainly, as Chapman points out, there are various ways to engage with the lyrics as we might a book of poems. I do wonder if meaning shifts in some of these songs without the ability to hear Barrett singing them. The crooning of his voice, in its indescribable loneliness, doesn’t always come through in the words alone. Yet that’s part of the artistry inherent in a book of lyrics—the songs do become written poems that take on new meaning with each encounter.

Books made up entirely of song lyrics are, in many ways, a peculiar genre. They take an artistic and cultural product that’s inherently aural—the song—and alter the form. In recent years, more books of lyrics have been published, and even academic criticism of lyrics-as-poetry have entered into a scholarly lexicon. Theories of a “poetics” of songwriting have even emerged in various venues. So, what are these books for and who is the intended audience? Certainly, there’s no single reply, and the answer likely varies from reader to reader. One of the great things about The Lyrics of Syd Barrett is that the text doesn’t attempt to answer this question. Instead, by consistently spotlighting the connections between sonic and visual forms in Barrett’s words, Chapman presents the book as an invitation to imagination. The reader is enticed into a whimsical space in which Barrett’s wordplay produces dreamlike visions that are all our own. Just as Barrett relied on techniques of pastiche to create aesthetically pleasing and inventive songs, the reader has a chance to imitate Barrett’s techniques, collecting ideas and images in order to reify, in some spectral sense, the “very irregular head” immortalized across the pages of the book.

You can buy the book from Omnibus Press, and you can find Rob Chapman on his website and on Twitter.