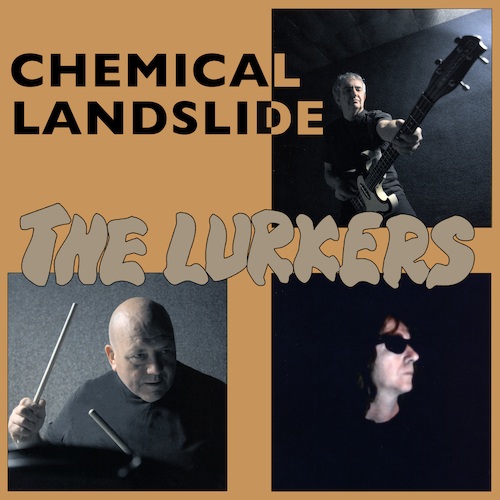 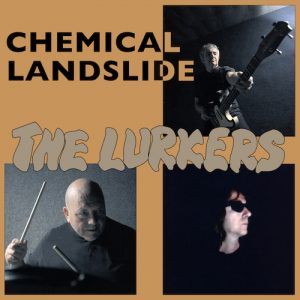 Available digitally for the first time, two albums by the Sex Crazy Pete Stride, Nigel Moore, Pete (Esso) Haynes line-up of the Lurkers originally released in 2012 and 2016 in limited editions.  ‘Dear Gerald’ Babey is their most loyal disciple.

When you bump into someone you haven’t seen for a while and they’re looking well, and flush, and a bit smug, and they say: “How are you doing?”  What you are supposed to say is: Great. Fine mate. Same as ever…. how are you?  They don’t really want to know.  People like me, with a perpetual black cloud over our head, a string of bad luck, tend to say…

… before having to listen to how well they are doing.

These reissues were mooted before the low-key success the Lurkers are currently having in Mike Reads the Heritage Chart.  Keep Voting!

I guess Pete, Nigel and Esso just fancied making some music again. Unfinished business and all that. Gigs were in the planning stages but Esso’s health put pay to that I seem to remember.

Chemical Landslide is the Lurkers at their heaviest and most Metal. It’s ‘driving music’, jukebox metal but with a dark, cynical worldview, the same as in the old days. Every Night’s a Story opens and it’s great to hear Esso beating those drum tattoos again in between massive power chords from Stride.

The songs: Chemical Landslide, September Breakdown, Now Is The Winter... hint at bad times in the recent past and plain-speaking, no-nonsense titles like Surviving establish the way things are. A insistent Buzzcockian guitar pattern drives the song and an Aint Gotta Clue style spoken section mid-song makes it distinctly Lurkers.

Chemical Landslide has a great bit of Tommy Gun style morse-code on guitar.  Bad Caroline sees the return of another ‘mad girl’ like Jenny and Mary from the bands older songs.

Strides vocals are gruff, lower-register and weirdly conversational and sinister giving the album a bit of a downbeat vibe amidst the electrical storm of guitar.

It is an unusual album and there’s not another band among their ilk that sound quite like this.  Misery-memoir Metal mixed with upbeat Punk Pop, but a lot better than that sounds on paper!

Some of the songs do outstay there welcome when they near and exceed the four minute mark, but on the whole, Chemical Landslide is a decent album for fans and newcomers who don’t mind a little bit of old-school Heavy Metal with their unpretentious punk rock’n’roll. 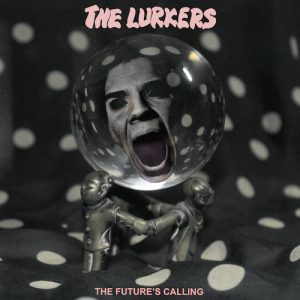 Whether or not the Lurkers took onboard the criticism from some quarters of Chemical Landslide -‘too metal, songs are too long and too miserable’ – the Future… kept the songs shorter and was more of a ramalama rock’n’roll album. We Had the Best Time, Smiling Inside,  Girls Have Fun seem to point to happier times (or the new medication doing its job…)

Nigel Moores bass-playing comes into its own on this album – particularly nifty playing on the excellent Summer Nights (Are Never Like Movies).

Not The Real Thing may well be a dig at phoney punk bands and New Songs (Like the Old Songs) is a wry tongue-in-cheek celebration of wilful crowd-pleasing and ‘not progressing’. It was later re-written as ‘Electrical Guitar‘.

Nearly Home (Turning Pages) is a nice contrast, a slow-burning piece of pop classicism:  Catchy yet melancholy. A vague echo of ‘Footballs coming Home’, mixed with a Chris Rea vibe and some beautiful guitar that hangs in the air Wicked Game style.  (Vote here!)

This albums song with a girls name in the title is There Goes Deborah.

The Future’s Calling is a thoroughly enjoyable ‘lost’ Lurkers album. The old magic is still there.  Last years Sex Crazy is slightly better overall, but both of these reissues of albums you may have missed out on first time round are definitely worth getting hold of.

Trying to listen objectively (I am Lurkers number one fan) they match up to anything bands like the Boys, Buzzcocks, Stiff Little Fingers and so on have released over the past thirty years.

Punk rock’n’roll underdogs and contenders to the last, the Lurkers never got the respect they deserved from the mainstream and the music press. Even if it is a strange and modest victory, it is great to see them holding their own in 2022 against Tony Hadley, Sting and Pink Floyd in the Heritage Chart.