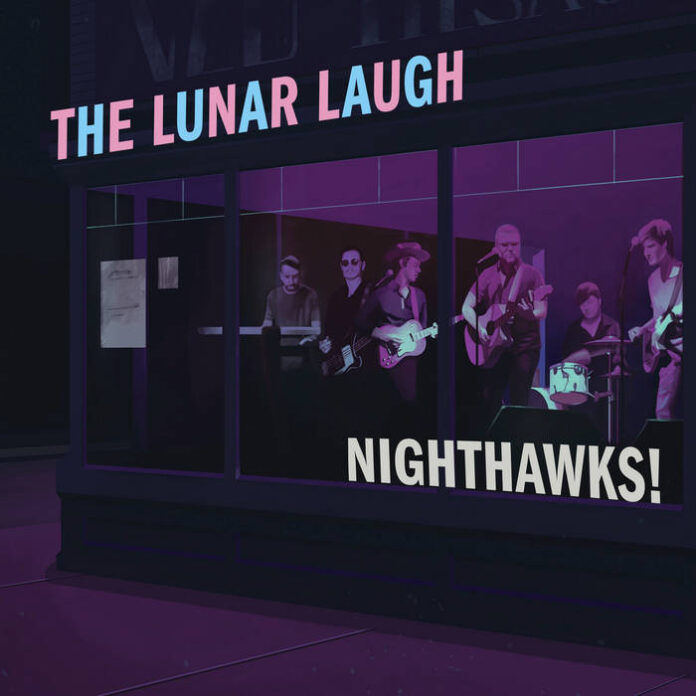 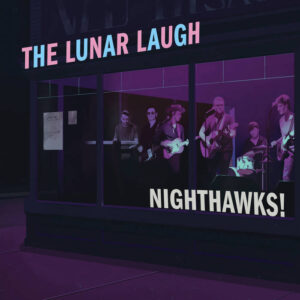 New, mostly live 18 track album by Oklahoma-based indie pop trio The Lunar Laugh. This is their fourth collection in total and their first for Big Stir..Ian Canty pours himself a black coffee…

Oklahoma three piece The Lunar Laugh from Oklahoma originally formed as a duo of Jared Lekites and Connor Anderson. This version of the band recorded their 2015 debut LP Apollo, before they added vocalist/guitarist Campbell Young to their ranks in 2017. After two more studio albums in Mama’s Boy and Goodnight Noises Everywhere from 2017 and 2019 respectively, we now are presented with this new, mainly live, collection entitled Nighthawks!. This release comes just as the band are looking at heading out on the road again, as the pandemic begins to ease (fingers crossed).

Nighthawks! comes in a cover which spoofs the Edward Hopper painting of the same name and ensues with a pair of brand new studio tracks. These efforts are pretty good, with some gleaming guitar work boosting I Wanna Know and It’s Okay being endowed with a memorable hook. But for me the live selections which follow are where The Lunar Laugh really kick into gear and things become more all the intriguing.

In playing gigs the band are assisted by a number of top quality musicians who help to enhance and expand the sonic landscape. The live shows documented here were recorded between 2017 and 2019 and the majority of the material included is culled from across The Lunar Laugh’s discography. We also are privy to a couple of cover versions and Campbell Taylor’s jumping groove Alive, taken from his solo repertoire.

After crowd noise and a stage announcement we’re straight into the live portion of the album with the pure pop harmonies and driving guitars of On The Road. It’s an exhilarating start and the goodtime feeling engendered continues on a bright By The Light Of The Living Room. “Don’t it make your blue eyes brown” craftily reverses the lyric of Crystal Gayle’s 1977 hit and the warm keyboard sound that underpins this song make The Lunar Laugh come over little like a US Brinsley Schwartz circa Surrender To The Rhythm, which is definitely a good thing.

The ornate country rock sound of the short and sweet Winsome comes next and Living A Lie adds a slice of fuzz guitar to the background of a dreamy and addictive dreamy pop tune. It includes some fine singing as well – The Lunar Laugh’s vocal attributes are to be envied. Waiting For A Sign, from the Goodnight Noises Everywhere LP, sweeps in with a subtle, mid-paced verve, before Tell Me A Story’s pretty folk rock sound introduces itself. Neil Diamond’s Solitary Man is coolly versioned in a country pop mode and the band’s knack for fine vocal arrangements and snappy musicianship is heard in full force on the title track of Mama’s Boy.

By now this record is shaping up as a joyful and exuberant display and the prime 1960s-influence on Welcome To the World follows on with feelgood vibes to spare. Old New Kid In Town is nicely cynical lyrically and bounces off from a r&b rhythm base to deliver some rock & roll thrills and the laidback cover of Death Cab For Cutie’s Soul Meets Body features a prime guest spot from singer Chase Kerby. A light country folk The Bedroom Door is cast in a similar stately pace, then Apollo’s strident drumbeat takes us back into more flowing pop/rock territory.

Penultimate tune Nighthawks And Mona Lisa has a delicately realised swagger and mid-song stops for a little audience participation. This sets up the finish of Work In Progress. There’s a real kick behind the rhythm on this number, but also some very sensitive sections that are well handled too. It all makes for a satisfying conclusion and despite the tracks being taken from across the years, the album does fit together exactly like a well-paced and very enjoyable live show should.

On Nighthawks! The Lunar Laugh ably demonstrate that you could be in for a hot night should you take the wise decision to catch the band in concert. More than that, the songs really come alive in this context and provide something that as a whole hangs together naturally. I certainly wished I was there, witnessing one of these performances. Nighthawks! represents a good starting point for newcomers to the band to begin their own exploration of the oeuvre of The Lunar Laugh, there is a lot to enjoy here. The majority of the LP fairly glistens with energy, joy and charm, plus the live setting adds exponentially to The Lunar Laugh’s solid knack for classily crafted and played gems.