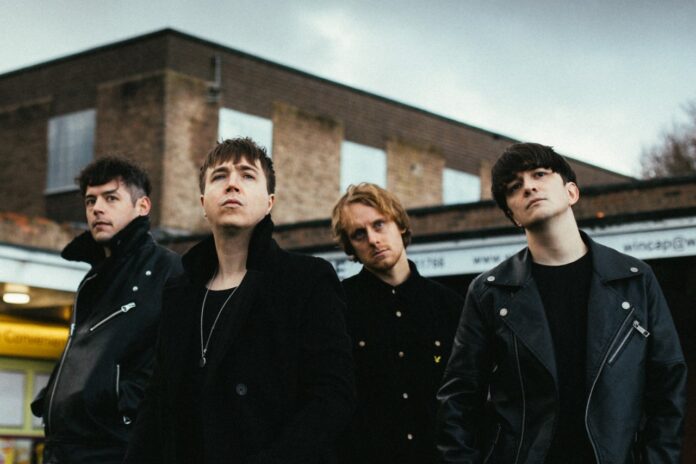 Straight outta Winsford… here come Cheshire quartet The Luka State with the incendiary blast of Oxygen Thief, their first new song since releasing their debut album Fall In Fall Out in 2021.

A full-throttle punk anthem releasing all the pent-up frustration of pandemic restrictions, it marks a change of direction from a band whose fiery rock anthems have gone up a notch in power, passion and pace.

Oxygen Thief channels everyone from Kid Kapichi and The Blinders to Strange Bones and Demob Happy, back to The Libertines and The Enemy… and all the way back to The Clash and The Alarm.

Blending visceral punk aggression and swaggering indie attitude with a catchy melody, it’s a song of revenge and recrimination that comes to the boil as furious ffrontman Conrad Ellis screams: “If you’ve got a fucking problem, I’ll rip you a-fucking-part.”

Oxygen Thief was written as a therapeutic escape from the claustrophobic lockdown of 2021 and recorded at Liverpool’s Motor Museum, a studio which is becoming a focal point for the wider scene around them.

“Oxygen Thief holds no prisoners and pins you to the wall,” says Ellis. “It’s an embodiment of grief, pain and anger. It chews you up, spits you back out and then punches you in the gut one more time for good measure. This song is for the misunderstood.”

The song’s video was filmed at their sold-out headline show at Manchester’s Bread Shed last September. Captured in back-to-basics black-and-white, it captures the explosive intensity of their live shows, its rapid cuts capturing the excitement of seeing the band from the mosh pit.

Conrad Ellis (vocals, guitar) and Sam Bell (bass, vocals) first met in their local youth club, New Images, when they were just 12-years-old, seeking something to counter the crushing boredom and apathy of small-town life in Winsford – a working-class town between Manchester and Liverpool that’s home to Britain’s largest rock salt mine.

So they did what bored teenagers have done for more than half a century – they formed a band, making their debut opening for Bruce Foxton’s From The Jam before evolving into The Luka State with the addition of Lewis Pusey (guitar) and Jake Barnabas (drums).

As Conrad summarises: “What’s Winsford famous for? Fucking nothing! Apart from salt and salt mines. We are all the salt of the earth up here.”

All words by Tim Cooper. You can find more of Tim’s writing at his Louder Than War author’s archive and at Muck Rack. He is also  Twitter as @TimCooperES and posts daily at EatsDrinksAndLeaves.