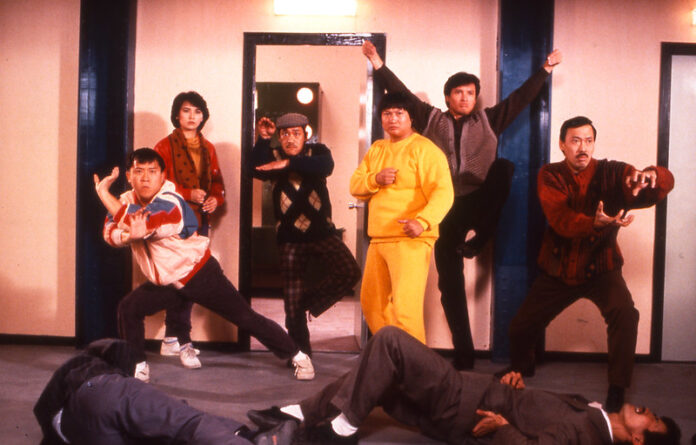 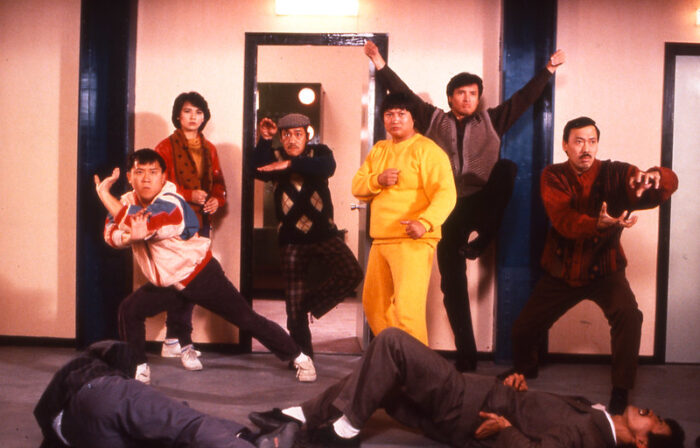 A massively successful franchise in Hong Kong, the Lucky Stars series begins with Winners and Sinners. A motley crew of five petty criminals with daft nicknames like Teapot (Sammo Hung), Exhaust Pipe (Richard Ng), Vaseline (Charlie Chin), Curly (John Shum), and Ranks (Stanley Fung), land up in jail together and become pals. By something of a coincidence, they’re all released on the same day.

They go to live with Curly and his sister (Cherie Chung) and launch a cleaning company that will hopefully earn them enough to keep them from reverting to their criminal ways. Of course, this isn’t going to be as simple as it might sound, especially when they become inadvertently mixed up in a struggle between two local Triad bosses over some counterfeit money plates. You won’t be surprised to learn that chaos ensues.

Despite being the weakest of these three movies, there are some great action scenes in Winners and Sinners featuring Jackie Chan’s cop CID Agent 07. Watch out for the staggeringly dangerous stunt where he skates under a moving container truck on a busy highway.

Strictly speaking, My Lucky Stars isn’t a direct sequel to Winners and Sinners. Most of the main characters are back, but their names have been changed and the Lucky Stars now share a collective background, supposedly growing up together in an orphanage, along with Jackie Chan’s cop character (now renamed Muscles). John Shum’s Curly is absent this time around due to his commitments as a political activist (I wonder what he thinks of Jackie Chan’s pro-Beijing government views today?) Eric Tsang takes his place as a Lucky Star and Curly’s sister is also absent for undisclosed reasons, her place as the gang’s object of desire being taken by a female cop played by Sibelle Hu.

Much of the film takes place in Tokyo, likely due to Jackie Chan’s massive popularity in Japan. There’s some great action from the off and few Jackie fans will be disappointed with the chase scene involving Muscles and Yuen Biao’s character Ricky. This starts in a Tokyo subway station and progresses to an amusement park near the base of Mount Fuji, with Muscles scaling the height of a giant Ferris wheel before the pair have to face a squad of ninjatō wielding ninjas. This ends with Ricky being kidnapped.

The pace inevitably drops as Muscles recruits a team to help him rescue his colleague. Yep, the Lucky Stars crew are somehow judged to be the men for the job, with comedy coming to the fore, although not always very funny comedy.

As I’ve mentioned before when reviewing Hong Kong cinema, the humour is sometimes lost in translation. Here much of it is just puerile – I mean grown men hatching elaborate plans that will let them be tied up with a beautiful young woman? I bet Benny Hill was huge in Hong Kong. One redeeming factor is that there’s never any attempt to make this bunch look like anything other than complete eedjits. This could be the least cool bunch of guys in cinematic history and the joke is always on them. 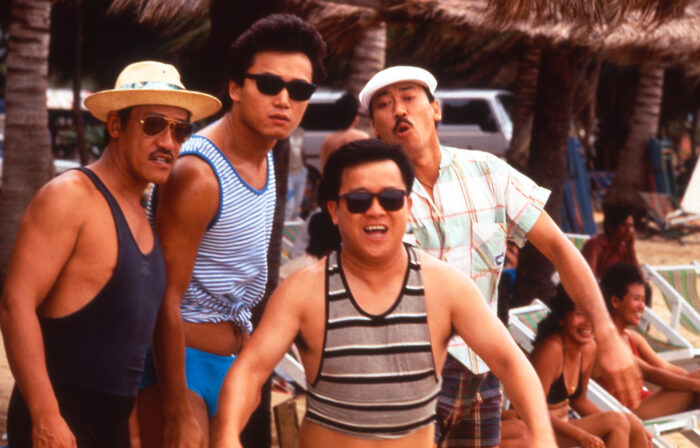 Sometimes, though, does the comedy does manage to hit the spot, especially the visual gags, which Sammo Hung has always displayed a mastery of. Surprisingly, Jackie Chan is relatively bsubdued in the laughter stakes throughout the three movies while Richard Ng consistently displays his natural comic abilities.

The first ten minutes of My Lucky Stars are among the most thrilling in Hong Kong cinema and the final segment is almost equally breathtaking, some of it inventively shot in a haunted house attraction in the amusement park. It’s worth watching for the beginning and ending alone. 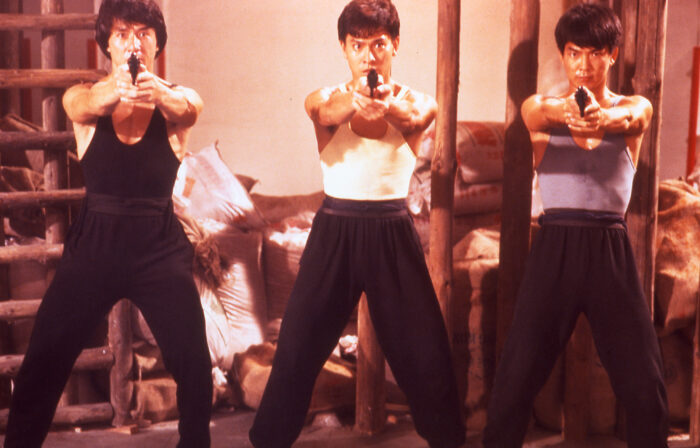 Twinkle, Twinkle, Lucky Stars (which also came out in 1985) sees the crew spending time in an upmarket holiday resort in Thailand.

The making of the film was rushed with much of it being written on the hoof but we have Andy Lau, Rosamund Kwan and Michelle Yeoh making memorable appearances and there are some real highlights. The best of these take place in the last act, with Sammo Hung’s Kidstuff involved in two of the finest Hong Kong brawls that any fan of kung fu comedy could wish to see.

The first sees a smoothie assassin, played by Australian martial artist Richard Norton, hardly able to hide his amusement when this chubster with a bowl haircut squares up to him. He’s in for a surprise. This fight is as funny as it’s thrilling and how a man of Sammo’s size can be so acrobatic remains a mystery to me. His flip off a dining table really is astounding. 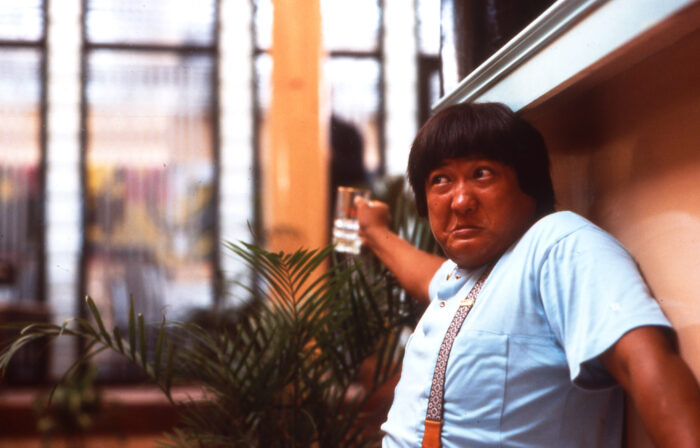 Next up, he takes on another assassin (Yasuaki Kurata), who has just got the better of Muscles. This confrontation might be seen as an uneven one. One man possesses a pair of sai swords. The other improvises two weapons of his own: Dunlop tennis rackets. I doubt Kidstuff could ever have won a set at Wimbledon but he does work wonders with those rackets.

Like the first two movies in the series, Twinkle, Twinkle Lucky Stars can make for some frustrating viewing at times, but it ends on a real high and the good easily outweighs the bad. I’m even now tempted to seek out the four further films in the franchise even though they were made without Chan’s involvement and with much less input from Sammo.

There are many special features here including optional English dubbed audio tracks for all films; newly translated English subtitles; brand new feature length audio commentaries on all three films by Asian film expert Frank Djeng; archival interviews with Sammo Hung and others, and a limited-edition collector’s booklet featuring new writing by James Oliver. Winners and Sinners and Twinkle, Twinkle, Lucky Stars come in new 4K restorations, while My Lucky Stars has been given a new 2K restoration. They all look fantastic.